Richard’s birthday was a success I’d say, as we all went out for Brazilian hamburgers and they only forgot one order this time. Many people got together, and many plans were made. Sometimes it feels like I go to meetings with my friends, as there is lots of organizing and communication needed to properly attend upcoming events. There are so many events that we have to decide which ones to go to, and which ones to miss.

On Tuesday I made ramen with Ann. While easy and really good, I think I’ll just go to one of the million ramen restaurants 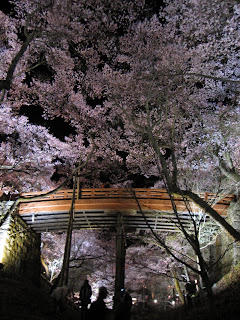 in Japan next time, as it’s not very expensive and while ours was tasty, their offerings are delicious. In such a competitive market, you really have to be to have a running business. I love family run operations anyways. I’m really starting to feel the crunch of my upcoming departure from Japan; less than 4 months away.

For Wednesday night Mervin and Aiko came to town, so Ann was able to experience Japanese Karaoke. Unfortunately the place we sang in had no Thai songs for her, and apparently her knowledge of English songs is really limited at best. Regardless we picked easy songs with easy choruses for her to join in occasionally. The biggest treat of the night for me was when Mervin picked up the mike and blew me away with his amazing singing voice. I eventually lost my voice again, but it was still a good time; I can’t remember when I went to karaoke last.

When I came home from work Thursday, Ann was all excited at the deals on veggies and stuff that she found shopping; she’s getting better at living in Japan it seems. Since we eat out too much, I suggested we stay in and cook for once, and Richard joined us. Finding the proper sauce for Ann was a challenge, as there are hundreds of sauces and thousands of Chinese characters for them. She apologized that she couldn’t get it ‘tasting the right way’, but Rich and I were pretty happy eating the spicy Thai treats she prepared.

Another reason for cooking at home was the Sakura, the Cherry Blossom trees, are blooming and beautiful. It was prime time to go out and picnic under them, and my friend from Kyoto, Noriko, had holidays to come visit. She arrived around 2 on Friday and we went to the famous Takato Park soon after, where I have been before.

There was a tour we’d join later in the day, but it was a night tour. Our weekend was short, so we wanted to see the park during the day too. Our timing was really, really good, as there was no traffic and we were able to park nearby, unlike last year’s 45-minute hike uphill from the ‘parking lot’ under a bridge last year. In fact, it was eerie how empty the park was at first, but we took advantage of that because it was that much more peaceful.

After an hour or so of wandering, we played card games under the trees while waiting for the tour to arrive. I taught how to play ‘99’ and ‘Pass the Ace’, and then later Ann taught us some Thai games of her own. One of them I really enjoyed is used for gambling, and the other was a bit too short and simple: ‘you get 2 cards and the person closest to 9 hits the other players’ sums it up nicely.

We played until the party showed up. Sorin is in charge of an English guide-book club that Patricia lead last year. We all got marvelous lunch boxes to eat together, and after they gave us a tour around the park, explaining the different types of cherry blossoms, some of the history of the park, and so on.

History that included samurai that took seppuku here; the act of suicide to atone dishonour 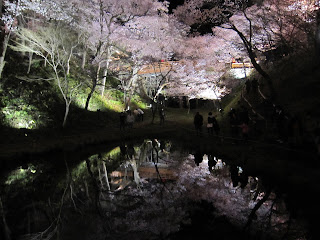 by cutting open your stomach with your katana sword. After doing that, their entrails were thrown up into the trees, and their blood soaked into the ground, which is why the Sakura in the park is so red. For some Sakura represents a Samurai’s life: short but very beautiful.

Gruesome stories aside, the park was very beautiful, and even more so at night with the reflection pond. We lingered for an hour until it was time to leave. Michelle had a while to wait for the train, so the 4 of us went to my place to play video games for an hour until then; we had to wake up early the next day.

Saturday morning started around a painful 6:00. We left my house at 6:30, picked up Richard and Thi at 7, and were in Okaya around 7:45. This day was a much bigger and apparently more spectacular Onbashira festival that you may remember me talking about last week. Apparently many towns have their own festival, where they drag these logs to temples and erect them to protect the shrines they surround. The old logs are cut down into charms and dispersed/sold.

What made this one the most famous was its hill was much larger. We parked at my tutor Kayo’s places and took a taxi to the area after painfully scouting the road. Driving nearby was nothing short of a nightmare. There were way too many police on each side of the road in various sections for over a kilometer, all of them swinging colourful batons and running and screaming at you with no hesitation should you slow down or try and drop people off. I was literally dizzy and nauseous the first time driving through that gauntlet with no success of dropping off people.

I don’t want to get too much into that, it makes me rather angry thinking about it again. Instead let’s cut to the festival. Actually it all gets a bit negative so I’ll try to give you the skinny to avoid spiraling into negativity like last week. The whole thing reeked of something that was poorly conceived, planned out, or cared about despite the organizers knowing perfectly well over a million people would be in attendance. The main event, the steep hill, was sandwiched between a river, mountain and forest. 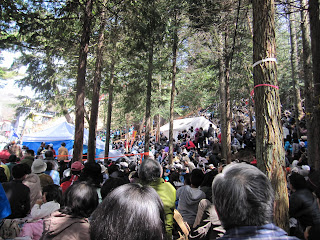 hours early, the best seats we could get was deep in the forest, and that was lucky to get. In the end we hardly saw anything anyways, and we left early instead of waiting for the second one out of mass disappointment. That was lucky though, as there were literally hundreds of thousands of people that couldn’t see a single thing as opposed to our sliver through some trees, and I wouldn’t have been surprised if they waited longer than 2 hours for that letdown. Even most of the Japanese people around us were not entertained in the slightest.

To give you an example of the ridiculousness, besides roads that were blocked off for literally no reason (the ambulance had to go through the monstrous crowd), there was a tent pitched at the foot of the hill. Inside was a table, and a man selling pamphlets. He didn’t even have many because who would, and more importantly, who could buy those stupid things. He was in a place you couldn’t walk to, the dozens of police officers saw to that. Not only could have 50 people been accommodated in that real estate, but also the big ugly tent wouldn’t have blocked the view for the 1000+ people standing behind it.

I should digress. We left and knew we could see it much better on TV our youtube later. Our hopes were up thinking this was more of an event and not a festival like last week’s, but instead it was an even bigger letdown because of that; a mindless festival would have been more fun. The only positive thing I can pull from the whole experience was playing cards for hours to pass the time in the woods with friends, and a cheese omelet covered hot dog I bought on the way out. Thi summed it up best when she said, “I feel like Onbashira gave me a big F-You”

We didn’t get back to Ina until 5 or 6, so we missed Hiroko’s potluck party. Anyways, at the park we just missed out on the Taiko drum performance, 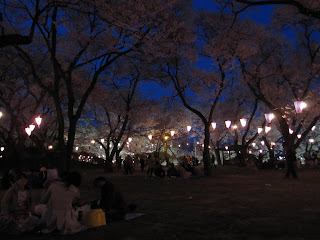 listening to it while walking towards the park from my house. Rich, Thi, Noriko, Ann and I ate food and relaxed under the pink trees in the evening again. It’s not always easy to entertain people, but if you present the right events it works out on its own. Together we were able to unwind again after the days events and lose ourselves is the lazy pink clouds above us.

That night we watched the movie ‘Pitch Black’ before an early night’s sleep, and slept in Sunday. I got up around 8 to cook some egg-in-a-basket for the girls, and we made plans for the day. It was raining in Ina, so we didn’t want to go to the park again. Matsumoto in comparison had nice weather, a castle, and Neal, but Noriko’s bus left at 4:15 so our hands were a bit tied.

Instead we chose to join a prefectural bowling event with dozens of other teachers. Since it was an hour south, Noriko could change her bus time to later and join. My big boat of a replacement car feels like a family car, but it gets the job done nicely I suppose for road trips.

We went bowling for a couple hours and I did ok. I tried to break 100, but my first game was stopped short at 97, and the second game I got 99. I think we all had fun though. We dropped Noriko off at the bus stop and had sushi for supper. For some reason the fish tasted a lot fresher and better, so I ate too much again. Ann and I watched a movie and it was an early night.

I got on the scale last night and found out I had hit 105kg. My weight has gone from embarrassing 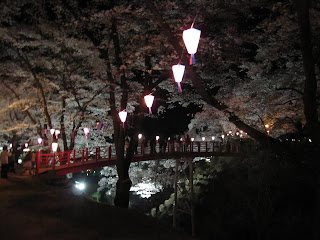 to shameful; I was 110 when I came to Japan almost 3 years ago, and I was 90kg last year. Writing this blog I can start to understand why; I think a lot about all the different foods to try, and how good they are. I like Neal’s philosophy of dying young but dying happy not being stuck in crappy diets, but I simply need to lessen my portions again.

Richard showed us a “food matters” documentary on Tuesday, and although we only saw half so far, I bought vitamin supplements the next day and plan on taking them. When I was playing volleyball years ago I was told to take them daily, although nobody ever said why. The documentary is really good, mentioning how society dances around this huge rhinoceros in the room; what really stuck to me was when one guy said; “we’re not suppose to be tired in the afternoon, we’re suppose to be full of energy.”

Well I recommend watching it anyways if you have the time. It’s time for me to get serious again about portion control and all that. Once your stomach shrinks a bit, it’s a lot easier to pass on seconds.

I'm sorry you had such a bad time at Onbashira, man :( My experience was good, but my co-worker took me in to participate, so I think that was a big part of it.