It’s a Small World After All

A huge cliché, true, but a nice opener for saying we went to Disney Land on Saturday before my mom arrived in Japan Sunday. I’ll try and refrain from making this a list of what I ate, when, and with who, so let’s just say Ann cooked a few times again this week, and it was all delicious again.

On Friday we left Ina and drove to Tokyo. It would be cheaper, if only slightly, to pick mom up in the car rather than by bus/train and whatever tickets for 3 people back to Ina. That, and I always secretly 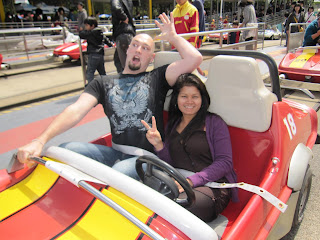 wanted to drive in Tokyo before, one of the biggest cities in the world?

After a couple hours, I soon discovered my car is much better on the highway as opposed to the little roads I hail from. I later discovered my car has an “overdrive”, so maybe that’s what’s been eating my fuel too. Anyways, getting to Tokyo was easy enough, but driving around it is something else. The highways/tolls lose their names and become numbered. The directions I printed off didn’t help, but a few well placed
“rainbow bridge” signs saved the day, as Mervin helped us find a cheap hotel in/at the harbor: Odaiba.

We arrived shortly later after some small panic attacks on 4 lane roads; far removed from the single lane roads I’m used to. I paid for the two nights, and quickly realized I had spent $300 already that weekend. I asked Ann what she wanted for supper, and the convenience store in our hotel was good enough because it was cheap. Haha, she’s a fun girl.

She laughed when she saw the room and took pictures right away so that she could show her friends what a $120 a night hotel in Tokyo looks like. I thought it was nice, if not small, but really that’s about as cheap as you’re going to get. Japan charges per person, not per room. I don’t know, I thought the room was nice anyways, and lucky for us it’s a “good neighbor” with Disney Land, meaning free shuttle bus to and from the park.

Ann asked why we didn’t just drive up Saturday and save lots of money. It was because I wanted to spend the whole day at Disney land instead of 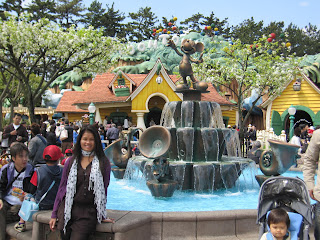 losing ½ the day in the car. Even 1 day is not enough; she wanted to go on all the rides but there simply wasn’t time. She had cautious optimism at first, but before long was running around with me from ride to ride and sampling the various colors of foods; mostly as bites off what I has bought. This included those huge and lovely smoked Turkey legs I got last time I went with Neal over 2 years ago.

We hit over a dozen rides. Some were a bit small and disappointing, but those were really rare. For example, Snow White’s and Pinocchio’s rides were designed to be nightmares, with very brief interludes into a cherry house or whatever fun memories I still had. I want to watch the movies again to jog my memory. We did other stuff too like go-karts, so Ann drove a car for the first time, even if it was on a very strict and slow track.

Show stealers were the roller coasters. I found out, to make me worry, she’s a roller coaster junkie. Big, crazy, and all that stuff that makes me horrified 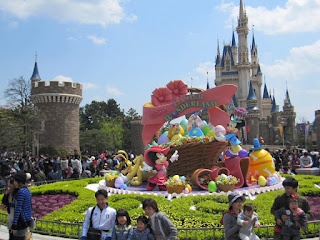 she loves. I told her about Disney Sea’s tower of terror, and she wanted to run over right away and try it. Maybe we’ll have to go to that park in the future, but I swore to never take that ride again.

I can do small bursts and such, those are fun; what I don’t like are the drops, or cruising downhill. Splash Mountain was open this time, and the big drop it proudly advertised at its front shocked me. This tainted the whole experience for me, as instead of enjoying the ride, I dreaded that huge drop that came up. When it came, I tried my best, but my face still twisted in horror as I saw on the photo. Looking at Ann though, I don’t think I’ve ever seen someone smile so wide and be that happy before. I’ll have to talk with Neal and see if he wants to do FujiQ roller coaster park with her maybe while I stand around like a wimp :)

The parades were spectacular again, with the night light parade stealing the show for us. By chance, we had practically front row seats as it sailed by, so maybe those feelings are biased. It really was magical though. I remember someone saying a while back, that nothing really is half-ass at Disney Land. It’s clean, details and designs are everywhere, and it all is in top shape.

We spent 12 hours running around, waiting in line, and so on. After the fireworks show we went to our bus, got back to our hotel, and barely had the energy to eat a quick supper from the convenience 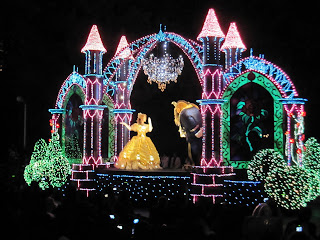 store again before falling asleep. We deservedly slept in Sunday and had some time before going to the airport. She had never seen or rode a Ferris wheel before, and we could see one nearby. It told us it was the Guinness’ World Record holder in 1999, but while very high, having all those huge buildings not so far away made us feel not as high above the clouds as you’d get in a place like Regina. We loved it regardless.

At the airport we waited for an hour for my mom. Instead of being held back by language barriers and stuff like Ann did, she was held back by long lines, and not knowing where to go; waiting for us to show up inside the area we couldn’t enter. She made her way eventually, and it was good to see her again after over a year.

The trip back through Tokyo was a challenge, and traffic was ugly. Mom got sick on the plane from a combination 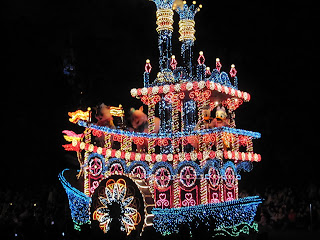 of a horrible landing and bad airplane food, then again later in the hot traffic wherever we were stuck in Tokyo. Once we figured out the numbers and road signs from a map we got from a toll guy, getting around wasn’t so tough or scary anymore. It took 4 hours to get back to Ina, and we even saw Mount Fuji along the way.

We met up with Ono Sensei, and it was a great reunion after how many years. Mom only has 2 short weeks here, and 3 or 4 of those days are spent busy around our area, seeing as many people as we can. That being said, this update will be short, and I won’t be able to update for another 2 weeks (until she leaves). It will be a great Golden Week holiday ^_^

"In order to live happily and free, you may have to sacrifice boredom. It is not always an easy sacrifice." -Richard Bach