Flexible Plans Save the Day

Well, mom came and left very successfully. Friends were made, places were seen, and lots of fun was had. I only got back late Sunday, spent hours sorting the hundreds of photos and videos, almost got sick (again) from exhaustion, but now can post.

I last left off 2 weeks ago Monday, before things got really crazy. I touched up my blog, 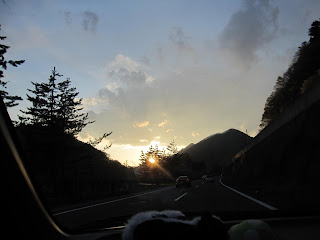 finished and prepared all the stuff I needed to get done at work, and went home to take my mom out for lunch. Because of the tight schedule, we only had this lunch free, and the one Tuesday. One of these two days Ann was going to cook Thai food for us, but she needed to get ingredients first so that idea was pushed to Wednesday.

I took Mom to Café Doodoo, where she met Hiroko for the first time. I thought they had met during her last trip, but I was mistaken. It’s a good thing it worked out like that, as mom had many presents she needed to buy and Hiroko had lots of advice, and free time to spend with her on Wednesday. I went to the office and got more work done, while she had a chance to shop with Ann for ingredients for Wednesday. That night we went to an Enkai (work party) thrown by my base school.

It was half a welcome party for the 3 new teachers, and welcome for Mom and Ann. Mom came in earlier to everyone’s pleasure as some of the teachers from her last visit 2 years ago still carried fond memories of their last time together. Mom felt better prepared this time to give out little gifts from Canada; from the little Canada pins, to some maple syrup, to hand-made dish towels with chocolate.

This was the second night in a row that we had raw fish, so mom quickly hit her limit. There were other varieties 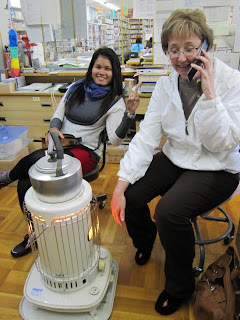 like pickled fish and sushi, but it was a bit too much too fast, so the rest of the trip didn’t include of that element. One of the new teachers spent 3 years in Sri Lanka founding a national baseball team, so Mom scouted him as a future husband for my sister Patty. Too bad for him though, I think she might be involved now.

We weren’t out late, as Tuesday was an early morning and a busy day at Tatsuno. I was worried about my 3rd year students, as presently they’re the worst class I’ve had to teach since coming here, but I was thrilled they were respectful to mom, and listened to her story. Later they even make questions. Mom is a natural in front of the class, and it was cut short to Ann’s relief by a health exam the students have in Japan, saving her from talking about Thailand. It’s not easy getting up in front of strangers and talking if you have no experience.

It was a cold day, so the girls huddled around a heater, looked in fashion magazines, traded hand moisturizer and talked about stuff like that. Despite any language barrier, this will always be a common language among girls. Those two got along as if Ann was a long-lost daughter, so it was a bit eerie at first, but really it saved me from shopping in the long run.

After a couple more classes, games, meeting teachers and other fun, we were invited to watch the band perform. They did two numbers and had some professional there to critique, so it wasn’t on the scale of mom’s last visit, but still nice. We got in my car and started driving North to Matsumoto, as this was the only chance we had to see Neal.

Along the way I showed mom 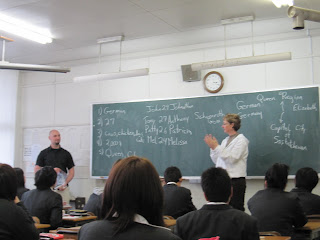 the ‘crazy’ Bull Dog store of strange items, where she found some more presents to her delight, including an alarm clock that screamed like a chicken. It was a good reunion, for Ann and I too, as we haven’t seen him in over a month.

After chats and gift exchanges, Neal treated us to an East Indian Restaurant that had live music, and we all really enjoyed it. It was even more so for mom, as she has never had that caliber of this brand of ethnic food. I feel for her too, so much is lost at a buffet line as I think I’ve experienced in Regina before, sometime in the past.

We got a 4-person course, and were full from the appetizers, so when the main course of Nan and Curry came by, we were struggling. I had some cheese and honey Nan (bread?) that was so amazing, that I was an idiot by trying to finish my meal. I simply ate too much and was in a bit of pain. The ride home was over an hour long, and Ann had to help me out by talking with me to keep me from getting too drowsy.

Wednesday was the last day of work for a long time, and I only had one class. Mom 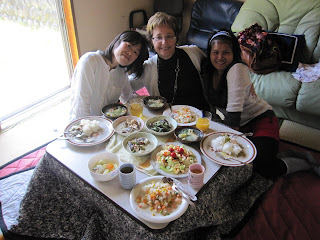 and Ann worked on lunch while I went to work for a half day, getting all I needed done for the holiday. I came home for lunch and Hiroko joined us. Ann whipped up yet another amazing Thai feast: salad, soup, curries and fried rice; all practically made from scratch. She even had a separate batch for my mom that wasn’t very spicy, although I think mom was starting to ‘warm up’ to a little spice in her food. (pun intended?)

After eating the girls went out shopping. Hiroko was busy in the evening, so we kept it local and not in Matsumoto as originally planned; Neal was busy anyways. The girls had fun doing their thing, and we stumbled upon a pet shop, where we could see cats and/or dogs with a price tag worth over three thousand dollars. Ann always laughed when we saw a shop after that: “come to Thailand, you can get them for free!”

After a fulfilling afternoon we went North again, but this time to Okaya. I had chatted with Mervin a couple days earlier saying how my mom was coming, and he suggested a small welcoming potluck party at his place; something simple right? Mom praised me for having a schedule for her, although I felt it to be slapstick, improvised and flexible, but what more do you need right? Try and do too much, and it won’t be as fun.

Maybe I’ve taken for granted what nice people I’ve come to known, as mom kept talking about what an amazing party Mervin threw. 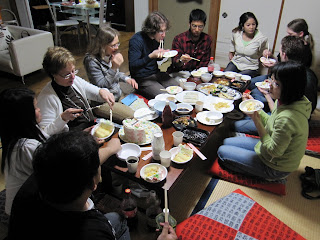 There were about 15 to 20 people and everyone brought a little something to munch on, including mom, who brought some of her poppy seed bread from Cananda. Other highlights were Ann’s spring rolls and peanut sauce that were a huge hit, flowers from Lauren, and Aiko’s huge welcome cake. (yes, we're eating that cake with chopsticks)

We all visited until 11 or so and I was getting tired, but someone suggested Karaoke and it was another “there won’t be a second chance” experience being offered. Apparently this was Mom’s first try at Karaoke, and we even got Ann to sing a song or two (one was Jingle Bells). After an hour and many people losing their voices, we were exhausted and parted ways; we partially planned to wake up early for Kyoto the next day.

But as fate would have it, I was sick in the morning; just pushing myself too hard maybe. It was a slow start then, but it all worked out, as mom wanted me to fill a suitcase of things to take home for when I move out. I really don’t think I have much to take home, but in no time that one suitcase was full and at the weight limit. It was small things I’ve bought from various countries over the years, and some video games.

Still, to have started moving out makes the upcoming July that much more real. I literally only have maybe 8 ‘free’ weekends left before going home, minus things like school festival and other stuff. There is a small list of things I want to do before I go, as who knows if I’ll ever be back to Japan. There are so many places to see and so many things to do, and I feel like I’ve mostly had my fill now. It was an amazing 3 years, but time to move on.

So anyways, after that was packed, we got in the car and drove to Kyoto in an amazing 3 hours. The bus takes 5 to 6 hours; it’s almost as if we were driving normally 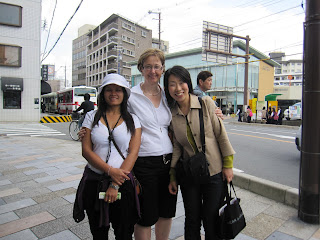 in Canada to make that kind of time. Noriko had found a wonderful hotel for us, right next to the station, and we found it fairly easily. We settled in, and went to the station to meet her as she got off work. For those who don’t remember, Noriko had a home stay in Canada some years ago, and mom is friends with her host parents.

We met up, went for food where I had delicious, but messy, curry udon, and since I was sick we were taking it easy that night. We went back to the hotel and I taught mom how to play “The Settlers of Catan”, which turned out to be the first of many times for us to play, as mom really got into it.

She won that first time playing, as beginner’s luck strikes again. My theory on that is since you’re new to the game, everyone helps you out to understand the game, and invertible gives them a huge advantage in that sense. (ie: no don’t put your road there, this is better. Or: save those cards and buy this instead)

I was hoping I could write more, and/or make it more entertaining, but alas, I’m super busy and will have to leave it like this until next week maybe. I'm mostly happy I got even this much done; so much happened, and so much is happening even now.

Look forward to our continuing adventure next week ^_^

"Life is not a problem to be solved, nor a question to be answered. Life is a mystery to be experienced." -Alan Watts