Three Girls and I in Kansai

Our first real day in Kyoto was rather pleasant. We started that day, as we did every day after that, by visiting the station’s competitively priced restaurants. 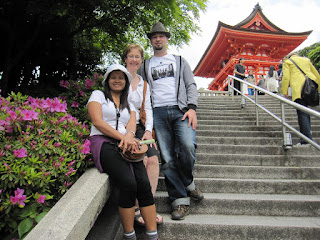 One thing I do love about Japan, is many places don’t blatantly try to rip you off like they would in North America, even if they’re in a huge station or a rare festival.

We decided to see one of the bigger temples; Kyo Mizu. I had gone before, and Noriko sees it every fall for the changing colours, but it’s in a good area and beautiful. Ann got to see her first orange tree, and has asked me periodically when I will show her an apple tree in Japan (I’ll get to it soon enough).

A nice philosophy my mom has, is to just wander and find things that way. As we learnt on her last trip, you never know what wonders you’ll stumble upon when you stray from the beaten path. We soaked up the atmosphere of the temple, then later the district of Gion; (once?) famous for its teahouses and Geisha.

It was talked about in “Memoirs of a Geisha” and I even messaged Neal to double check, but seeing it in person was nothing like I expected. Of course, it’s ridiculous in the first place for me to think a very busy and expensive piece of Japan in a major city would be anything like it was over 60 years ago. Alas we saw no Geisha or Maiko ladies walking around, 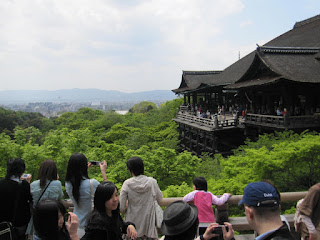 but that didn’t stop us from enjoying the area (and making short stops in some of the many little shops) and laughing at some decorations, like a life-sized statue of a boy having his shorts pulled down by a dog, leaving his sculpted unmentionables hanging.

Personally I don’t like long periods of walking, and I found it amusing when Neal summed me up earlier to Ann and mom: “After a while he’ll start complaining, and over time the complaining will get louder, but it’s not a show stopper” or something like that. True, I do carry around a lot more weight on me than I have this time last year, but I’m definitely on the road to correcting that.

That being said, I love the chance to stop walking and take a break for a while before I get too tired. Unfortunately usually the only practical break you can take is for a snack at one of the many different food stands you cross every 10 minutes or so. One time I went for some Takoyaki (squid balls) and Ann protested with: “Tony, again?” much to Mom’s amusement.

I got the last laugh though; when the girls ate a ball as the same time 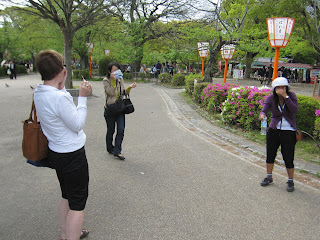 and proceeded to burn their mouths, despite watching me burn mine and laughing at my expense mere moments earlier. I got pictures to commemorate the occasion; all in good fun. Another snack I got mom to try was Taiyaki. It’s kind of like a fish-shaped donut with different filling, in this case, custard cream.

It was a full day out, and it was topped off with more of that board game, for which mom was now completely hooked to. This time Noriko won I believe. We played one game to relax after all the walking, and later went out for a nice big bowl of ramen. Through the window we could see the chef preparing his broth and it was very interesting. For example, he sliced big cuts of apples to have its flavour boiled out among other things. Once we got back to the hotel, we played another game and went to bed.

Now it was May 1st and we found another affordable breakfast place to start the day. The owner there was an older, grumpy looking 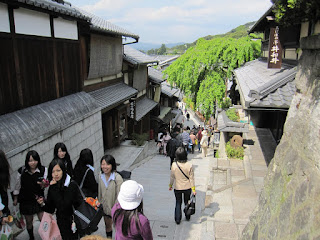 lady working the till, who barked orders at the fearful young waitress who were running back and forth to appease her. Mom was in awe, so she took my camera to snap a picture; much like she had done that morning to capture another girl’s high-heeled shoes that were shaped like hearts <3

We talked about things to do, and a day trip to Osaka came up. I went over things to do there, like Universal Studios, the Zoo, and a world-class aquarium, but the girls overruled all that with “shopping”. In a half panic, I foolishly asked: “You can’t shop all day though, can you?” perhaps hoping we could do something more or different; something I didn’t find so mundane. Their answer to me was tear-filled laughter.

Since I’m out of my league on this issue, I’m not one to comment really. One thing girls can do is ‘shop’ for hours on end, when usually they do little more than gawk at all the things in stores (maybe?) A couple times I went and found a chair while the girls attempted to saturate their shopping appetite. By looking at stuff, trying it on, laughing at the ridiculous prices on some items and getting opinions on others. Let the girls play though right? The malls were ridiculously busy because of the holiday.

Once again, I was very grateful Ann was there to bail me out, as on Mom’s last trip when she wanted advice from me, I could hardly sum up the energy to throw out an opinion on the item in question. “I don’t know, whatever you like” 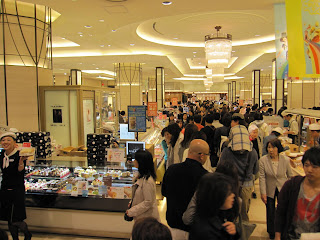 is my default answer as I look for the exit. Ann stepped up and gave solid advice, and is a very savvy shopper; telling stories of Thailand and the bountiful shopping to be had there, allowing me to slip out and find somewhere to sit down. They really didn't buy too much though, it was more for the experience and girl bonding I'd think.

My shopping experience wasn’t all bad however. During one of the hours while the girls mulled over wallets (or maybe it wasn’t an hour and just felt that way) I happened to stumble by and start looking myself. In about 10 minutes, Ann found a wonderful wallet for me at a very reasonable price. My current wallet was a gift from my last girlfriend many a years ago, and had holes in it already despite being made of leather.

It had a change purse (seemingly rare for some reason), and room for various cards. I was a bit reserved on the bold red colour at first, but it grew on me very fast. It’s a “Michel Klein” as if that meant anything to me, but mom assured me it’s a “good brand”. I was half expecting to tenderly throw out my old, faithful companion, that had been with me every day for many years and visited many countries, holding their diverse flavour of colourful monies for me; but before I could, mom chucked it into a small trash can near the escalator.

It was a bit of a shock, but it was weird to be attached to a piece of leather 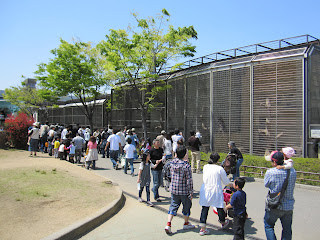 like that in the first place. That being said, I absolutely love the new one, as it came to life as I moved my items into it. I guess that made it a good day of shopping, as the girls seemed satisfied too. I convinced us to take a breather at a sushi train restaurant, which unfortunately was mom’s only stop at one this trip (she only had one plate too). Ah well, she had her fill of raw fish I guess.

We didn’t eat too much, as after getting back and another game, we had our last meal together with Noriko; rice omelets. We got the idea from watching them make the pretty dishes through a window in a mall earlier. After lightly cooking a thin layer of eggs, fried rice is placed in the middle, so the chef can gently toss and fold the package up together in a pleasant yellow shell of egg.

We watched them in a mall where we were able to properly culture shock mom, and to a lesser extent Ann, as she is still fairly new. A package of 9 strawberries for example was $8; almost a dollar each. One melon was over $30, and things like kiwis, oranges, apples and grapefruit are over a dollar each. This is just an example of the difficulties of buying fresh produce in Japan.

On the 2nd we needed to check out, and since it was golden week hotels everywhere were sold out. My ‘great planning’ for the trip had a 2 day window of uncertainty 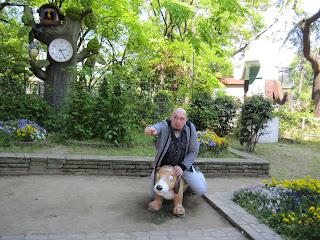 , but after an hour of searching online, was able to find a so-so place to hole up in Nagoya; or next destination. We would have liked to stay longer at the Kyoto place, as it really was fabulous, but time flies as they say. We checked out, checked to leave our car until later, and took one last trip to Osaka to see its zoo, as Mom wasn’t feeling the aquarium.

I took maybe a hundred photos, but how much can I say about a zoo? There were animals. Many were cool, and many were in small cages it seemed. I got to see a polar bear, a giraffe, and some other new ones like different forms of tigers. The zoo was very, very busy, and not really that big. I said to myself “this place is a zoo” before stopping myself at the obvious irony; and wondering who the real animals were, with all the crowding around tiny windows and the like people were doing.

In short, it was fun! I was, as I always am, surprised with Ann, as it was her first time seeing some things like sheep. We stayed for hours, but got tired and it was time to leave. We went to the bathroom before the long train ride back, and mom accidentally 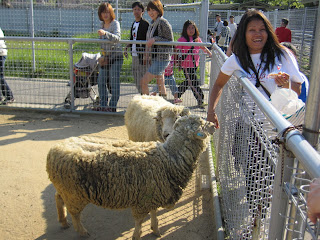 pushed an alarm button instead of triggering an automatic hand blower. Her and Ann cleared out quickly at this folly, and told me through barely muffled laughter to ‘keep walking and don’t look back’

It was a good drive to Nagoya; we found the place without hardly and troubles and settled right in. Compared to the last place, it was an obvious dive, and the irony is it practically cost the same. Beggars can’t be choosers I guess, as I shouldn’t have waited so long to book in the first place.

I think we were out of ‘Kansai’ now, roughly defined as ‘Western Japan’ even though I consider it to be somewhat central what with Hiroshima and other stuff further away. It’s a reference largely to the Osaka/Kyoto area as I’m to believe. Hopefully I can give you more updates before too long; I’m still busy but atleast I don’t feel like I’m drowning like last week.

"One of the few things that can't be recycled is wasted time." -Sean Covey