School is pretty much back in full swing from spring holidays, so I’ve found myself with less free time than usual. Uncompleted tasks started to build up until I made a to-do list and committed myself to cleaning it up, everything from sending my taxes home, to making itineraries, to job hunting. I cleared off most of my list, and was unexpectedly hit with a weekend of relaxation.

It’s always go go go with new things to do and see, but when a Canadian party was canceled at the last minute and most of 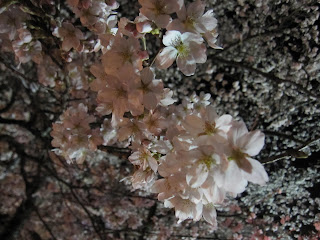 my friends were busy that weekend, we weren’t exactly rushing to make new plans. The week was fairly busy like usual, although it’s interesting just how different it is from last fall when I was tutoring, being tutored and so on.

Now we mostly meet with Richard and eat out then watch a movie, or Ann cooks something up; on Wednesday she made yellow curry and Saturday was fried rice and tom yum soup. She told me one of the best parts of being in Japan for her is being able to cook, even if it’s hard to find some ingredients. I thought that was a bit strange, maybe she doesn’t have the chance often back in Thailand, what with the long hours and many days kept busy. She used to be a housemaid, and lately it sounds like that’s the job she wants to return to.

She’s pretty price conscience when we’re out shopping, perhaps still not coming to grip with how much more expensive 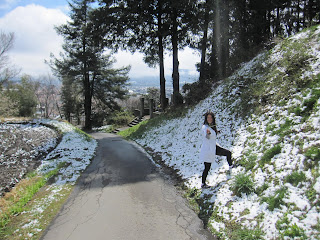 things are in Japan. I don’t blame her though, like when we saw one mango for $40 dollars, or a small box of cherries for $30. Sometimes perhaps it is cheaper to eat out, as ironic as that is. If it means a home cooked meal though, I’ll almost always chose that over eating out. There are still lots of things to try in Japan though, like the Katsu-don we had on Monday with Rich. (breaded pork chop in a rice bowl)

I had a work welcome party Friday night again and it was fun despite walking over 20 minutes in the rain without an umbrella. It was sort of a standard party, but still fun. The teacher sitting across from me wanted to talk a lot, which was a nice change, and a good chance to use lots of Japanese. I thought I had got a little rusty, as strange as that is, but it’s interesting how so much of the basic/intermediate grammar I memorized is not used in normal conversations.

A lot of the week was plagued by ugly weather, from 3 days of rain to actual snow. When I woke up Saturday 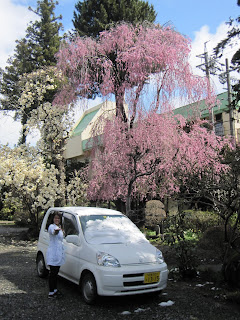 morning and saw the ground covered, I groaned and went back to bed. Ann was excited though, and luckily it was a beautiful day. We walked around that morning and got pictures of cherry blossoms surrounded by snow before it all melted, an irony my teacher said she’s never experienced in her life yet. That’s still the best sound in the world in my opinion; the sound of snow melting on a sunny day.

It all melted fast enough and the day was beautiful. While we were walking, Ann noticed green onions growing wild on a hill near my house. Not that long ago she took what I always thought were weeds in my backyard and put some in the fridge. Sure enough, they’re herbs of some sort that she pointed out in a supermarket later. One man’s weeds are another woman’s garnish I guess. That, or I’m just ignorant with spices; I really have to figure them out sometime.

We had sushi for brunch, and visited some stores to peruse. We went to a “bull dog” store where you get crazy things like my Hello Kitty bed sheets, or that gag gift can of sex toys I got my brother John for Christmas 2 years ago. Later we saw some more stores, and I showed her the amazing Japanese 100 yen store ($1 store approx). Not do be outdone; they have a 20 baht store in Thailand (a 60 cents store). Regardless we still got some good stuff, like Ann picked up some black thread so she could fix a button on my suit.

We had even more luck in this different store as it has a mini-Thai section for spices and curries. Ann’s eyes lit up, and she was ecstatic to find fish sauce, apparently vital for many dishes. When she cooks, she has a very Thai approach (and somewhat Japanese) in buying the ingredients the day of. In contrast, I like to plan my week ahead and only go shopping only once if possible; I picked up some beef and made Hamburger 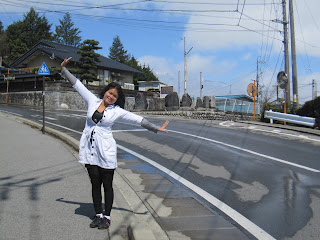 Helper on Wednesday; I still have lots of food I need to cook that I brought from Canada. On that note, in the frozen food section, she was surprised to find that you can buy frozen vegetables. Like I said earlier, she made some fried rice that night, and some delicious Thai soup.

We had an even lazier day Sunday and watched a lot of Futurama. I’m excited the show is starting up again after Fox canceled it almost 6 years ago. We only left the house once to buy ingredients for pizza this time. The pizza I made was such a monster it left a mess in my oven, and served its purpose again for breakfast. It was another very good day, even though we did so little. With a stomach full of pizza, I went to bed embarrassingly early at 10, but doing so leaves me with lots of energy to polish off the rest of my to-do list.

On that list is touching up my mom’s itinerary. She will arrive next week everyone is excited to see her again. On that note, I don’t know if I’ll be able to post on time next Monday, but if I can’t, it should come sometime during the week.

"Never believe that a few caring people can't change the world. For, indeed, that's all who ever have." -Margaret Mead