After visiting a Brazilian store for whole chickens and other treats, Ann wanted to make a Thai dish, and I wanted to make a roast chicken. Roasting a whole chicken, to me, calls for a party, or a gathering of people to enjoy together. I sent out some emails, and before long we had agreed to a potluck at my place on Wednesday night.

I don’t know about you, but the day of a big meal I get excited. So excited, that I start cooking hours before I should. Ann 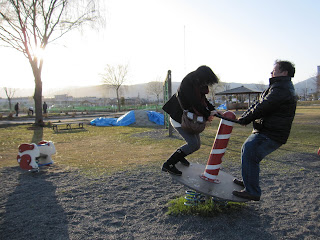 had a Thai dish ready by 5:00, but we weren’t suppose to eat until 7:00, and people started showing up. Richard made a salad, Molly had breads and garlic bread, Jessie had corn bread, Ike had creamy chive potatoes and Craig and Lauren had grits.

“Grits” is a word you hear often in pop culture, but I don’t think I honestly knew what they were. Apparently they’re a staple/simple/”poor-man’s” food from the south. Well lobsters and crab used to be a “poor man’s” food too, all I care about is if it tastes good, and they were all right. I guess you use it as a base for many other foods, not unlike rice or bread.

My roast chicken, stuffing, whipped potatoes, chip dip and instant gravy turned out just fine, and we ate, drank, and were merry for a while. Unfortunately it was a Wednesday night, and people had their minds on work the next day. I was hoping to stay up a bit late playing games or something. We watched an episode of “Planet Earth” instead, and although an amazing series, is something of a party killer in my eyes. It demands your attention with its splendour, and silence breeds fatigue. I haven’t watched them all myself, as I always fall asleep half way through; it’s just too relaxing.

Everyone left after 1 episode except for Richard, who was the only one to help Ann and I clean up the mess after. His birthday is today too, so I’m racking my brain on what to get him, although after typing that I have a good idea now. He wants to celebrate over Brazilian burgers tonight.

Despite having no work still during this spring vacation, I was productive Thursday by throwing out around 40-50 textbooks cluttering my desk that I’ve never looked at. Most of them were teaching theories, the kind of thing that don’t help you in the slightest, and having thousands of pages on your desk only give you information overload. The only sad thing is, my desk still looks cluttered with books I haven’t read yet, but maybe my replacement will. I bet thinking that is what keeps these books around in the first place.

That night Ann cooked up the remaining ingredients 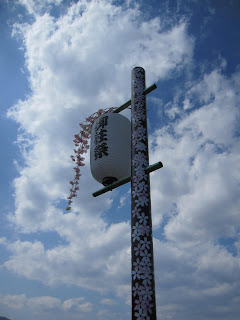 she put together for Wednesday night (there was simply too much) and we had a very spicy and amazing Thai meal. She was homesick for something spicy as Japanese food leaves you wanting in that department.

On Tuesday we drove over an hour to the “spiciest ramen restaurant in Japan” and despite showing up between 6 and 7:30, the 90-minute window they’re actually open, they were still closed. We were so hungry and disappointed we just got fast food because you know those places will actually be open and willing to take your money. I don’t know why so many Japanese restaurants can and actually do this. I don’t think I’ll ever go there again out of principle, even if I do have their number to call ahead next time. I think this is the 3rd or 4th time we’ve shown up there and they were closed.

What Ann cooked on Thursday was a million times better anyways. I’m happy we were able to find the spicy red peppers for her, tucked away and hidden in the local supermarket. We bought all 3 little packages of them so we can use them again in the future. It was very spicy, delicious, and filling. On another note, we used up the last of the rice I bought over 2 years ago. When I came here I bought a 10kg bag, but simply haven’t cooked enough to empty it until now. It’s nice to be back in the kitchen experimenting again.

On Friday night I had another work party, but this time it was to welcome the new teachers. It was a good time, but I was 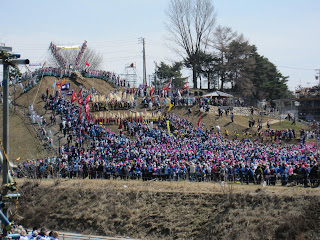 excited for the Onbashira festival the next day and didn’t want to be sick. Despite my instincts saying otherwise I went to the second party where I got to talk with my new boss for a while and little else. I got coffee that cost $10, as the price is split at Japanese parties. Usually that works in my favour when I have beer so I’m not really complaining.

Hype is very troublesome and I love the one quote “Nothing kills hype faster than the product being released.” Well how would you feel if I told you a year ago that Onbashira is this “crazy event that only happens once every 6 years, where people die riding a tree down a mountain?” Over a million people go see it, and it’s more popular than that massive fireworks show that happens yearly and draws hundreds of thousands.

Actually being there was a lot like every other festival in Japan, which isn’t a bad thing. I heard some citizens paid up to $500 for seats next to one of the hills, and later my friend Phil told me he got to help drag that log down the same hill for free, and was given more alcohol than he could handle for his troubles. The elevated seats we stood beside for free were selling at $45 each. But I digress.

Actually watching the event had a lot of false starts making it anti-climatic. We actually didn’t even make it out until Sunday after we watched it for a bit on Mervin’s awesome HDTV on Saturday. Instead we had a lot of fun then enjoying the spring weather by walking out to the lake, playing on all the various playground equipment we came across, skipped rocks and other stuff. We soaked our feet in a foot Onsen (hot spring) until dark, had supper, drinks and watched a movie.

We thought the city would be wall-to-wall people and cars, but we were far enough removed from Chino city that it wasn’t the case. Regardless Ann and I stayed over at Mervin’s so we could get an early start for the festival. She’s starting to talk more to others so that’s a bonus. Mervin was a lot of help too, giving her good advice on practicing 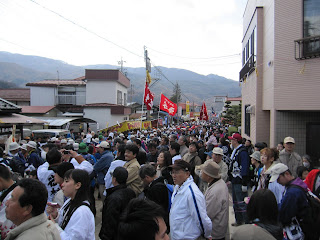 her English and so on. It helps when you hear that stuff from more than one person; she bugs me that I keep reinforcing things that are easy to do, like making pancakes or whatever. I know she understands lots, but is shy about using it. That's another thing I really like about Mervin, he's good at making anyone feel relaxed, and when he's happy, he truly looks like a man that is happy.

So back to the festival Sunday, the log we queued up to watch was scheduled to launch at noon, but after over an hour of singing and not much going on, it finally slowly fell down the hill, and people scattered the moment it finished. After the hill they drag the log 200m through town to the river where they cross, taking their sweet time again. My theory is that since the people paid so much they drag it out as long as possible. I almost wish I counted the number of times they played the same 20-note song over and over to try and pump up the crowd, but I know that if I had I would only have been more agitated and angry.

The places we chose to wait at for 90-minute stretches often weren’t ideal. The hill we were standing on was steep at the railroad tracks covered with rocks, and then at the lake was another steep hill I could only stay on because of a tiny dip I could sit on that kept me from sliding down. For these hundreds of thousands of people we only saw 5 portable washrooms.

Well that was the bad part, 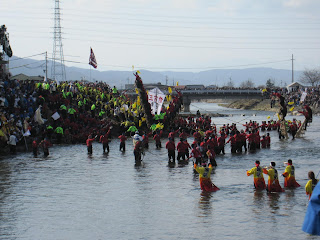 as people like to hear about; the good stories are still pretty fun I think. Despite the actual festival part of the festival, we enjoyed the food, meeting with people and talking to the locals. One group proclaimed “don’t push us, we’re drunk” while dragging the log through the packed streets. We ate our fill and tried many new and wonderful things. One stand was selling drinks they poured from a bottle for $3, but a vending machine is never far away in Japan where we got cold drinks for much cheaper.

It really was a nice day. Unfortunately I’m too white and despite wearing a toque for half the day, my head and face got terribly sunburnt again. I should almost put on sunscreen anytime I want to go outside. Ann didn’t understand my condition of being too white, but it makes sense. She’s dealing with dry lips for the first time because the lack of humidity is new to her too. Overall it was a great weekend.

I had this all written and ready to go home, but we got a surprise visit from Matsushima Sensei, my caretaker for years before leaving on maternity leave. Her and the baby are doing well and we had a good talk. She offered to let me hold the baby, and before I knew it she was in my arms.

It was one of those weird moments you always hear people talking about; the moment a baby is in their arms. I honestly can’t remember the last time I had done that, and I was nervous the whole time. Some people resolve to want kids right away, for me it affirmed I’m just not ready now, and makes me wonder if I’ll ever be. I wonder how many people really are ready when they make that decision, or find out it’s happening whether they’re ready or not.

She sure is a cute baby though, and slept the whole time. There’s something to that whole “miracle of life” thing you keep hearing about; I feel moved anyways.

"Wherever we are and whatever we are doing, it is possible to learn something that can enrich our lives and the lives of others... No one's education is ever complete." -Sir John Templeton