Movies, games and eating at various restaurants; I don’t remember much more about last week than that. Things are still very slow because there are no classes for another week or so, but Ann and I are having a lot of fun. Since I taught her how Sudoku works, she’s been playing with those puzzles a lot, like while I type this.

On Friday we drove up to Matsumoto 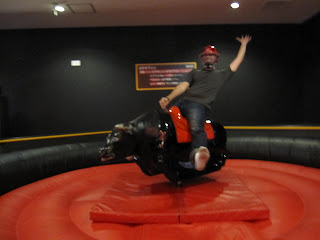 to catch up with Neal for the first time in weeks. While we didn’t talk much about our upcoming cross-Canada trip, we had fun with Rich, Thi, Phil and Theresa. Matsumoto is a busy place so it took a bit to find a place to eat at. I just love the atmosphere at night of people walking around on streets built mostly for pedestrians, and are bustling.

I still remember Ann’s first day here, when she asked me “where is all the plastic?” as she looked around the street. You’re not in Thailand anymore; it’s much cleaner and safer here. Theresa had a story for us though; last weekend someone broke into her car and stole her wallet. To understate how shocked we were, her police report was the 44th crime of the year for that prefecture (province/state).

Catching up with people was lots of fun, and the food and drinks were good. We stayed at Neal’s and went to the famous Nagano temple “Zenkoji” on Saturday with him. It was vastly different from Buddha temples in Thailand naturally, so I think it was a good experience for Ann.

There was a lot to teach; like how you wash your hands first, use the incense smoke on trouble body parts, throw money in the trough and so on. There were other moneymaking things there like a dark hallway of enlightenment or something; you search for a key in darkness, a metaphor on life maybe. We weren’t too interested.

We walked a good long time looking for “something spicy” for lunch. After half an hour or more we gave up on Japan and went to McDonalds 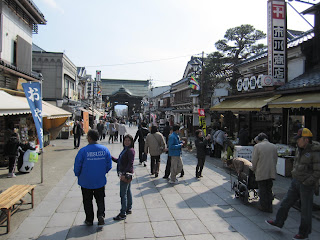 ; not one of our prouder moments but we were tired and hungry already. After eating we met up with Ashley and her friend Brandon, who was new to Japan.

Together we went to ‘Round One’, the mythical game place that has eluded me for over 2 years. It was 6 stories of awesome. The first 2 floors were pictures machines and various other things, while 4-5/6 (high roof) was $17 for 3 hours. Arcades were just a small part of what you could do there: they had archery, basketball, golf, gun ranges, roller skating, karaoke, tennis, baseball and many other offers to name a few. Of the crazier stuff, they had a curling rink and fishing pond. Oh ya and I rode a mechanical bull for the first time.

We went from machine to machine, place to place like we had A.D.D. Of course, 3 hours was just not enough, but enough so we felt satisfied. There’s so much to talk about because as you can imagine how scattered and diverse it was, that I’ll just have to post some pictures and just say it was really, really fun.

It was late by the time we were done, so we had supper quickly, drove Neal home, then a couple more hours until we were home; around 1 in the morning. We slept in Sunday but later went out for Nepalese 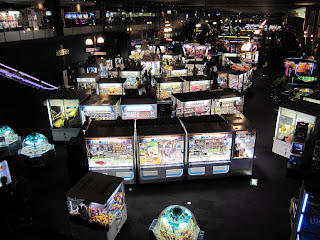 food with Rich and Thi. There we had some food that was a little spicy atleast, but wasn’t remarkable, atleast not at those prices. You take the good with the bad on new experiences, the important thing is to try for yourself I believe.

While the theme is “rare”, on the way there we were behind a ridiculously crazy driver, with large and dangerous swerving. I honked my horn at him as he almost killed an old lady earlier, so he slammed on his brakes, jumped out and started screaming at me. I calmly locked my doors and avoided eye contact. After he was done screaming at me in Japanese, he smacked my mirror and went back to his vehicle.

I was clearly rattled by this, but relaxed after a while. Ann told me it happens a lot of Thailand, and after the yelling someone kicks the other person and it’s over. She’s pretty cute when she tells those stories so it helped. Mad world eh?

Today is largely another day off and I plan on making something big/fun for supper, and not really in the mood for writing a blog, but it looks like I threw together something slightly sufficient. It's always a good feeling to finish this, post it, and put it out of my mind for the rest of the week.

“If you wish to make an apple pie from scratch, you must first invent The Universe” –Carl Sagan