I read my friend’s blog the other day, which is rare for me. There wasn’t a lot written, but what was there I found profound. Just because I have nothing to say, doesn’t mean that I should say that. I just hope I’m not too redundant. 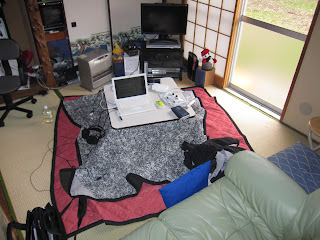 I’ve always worked from examples and figured things out that way, but my ‘blog’ thing is amateur at best: me recording my activities, and perceptions of the world therein. If I can entertain others in the process then good on me I guess.

That said, I’ve noticed I don’t talk too much about Japan and its culture like I used to. Tomorrow Ann comes to visit me and will take an airplane for the first time. I guess through her eyes I can relate and reminisce to this beautiful, foreign place again. It’s hard to believe in about 4 months I’ll be leaving it all behind after almost 3 years.

Now that most of the Winter’s hardships are behind me, logic replaces the “fight or flight” of my frozen house and it’s getting harder to face the reality that this will all be behind me soon. I want to type I’m a bit scared, but at the same time I’m excited for the new adventures that await me.

As for the week’s occurrences: I think it was Wednesday was supper at Brett’s and Kaoru’s place, although I think they rented out the apartment for the party from Kaoru’s 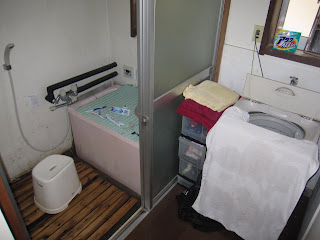 work, “Kanten papa” (easy dad). They sell Jellies and other treats, basically make-it-yourself goodies. We all made our own mini pizzas, which were one of the best ideas I’ve had a party in a long time, then we all ate pieces of the different pizzas people made. Some turned out quite crazy, but it’s the experience right? It always tastes better if you helped make it (usually).

Brett had some new hot sauce, and when we weren’t catching up (it has been so long since we got together) he was boasting how this hot sauce was like water to me. It looked watery so I was hesitant to put it on anything and have it make a mess, but when I did try it later, it was brilliant.

It’s called “Louisiana Hot Sauce” or something, and Brett gave me the whole bottle. I recognized it right away as the sauce used on my beloved chicken wings back home: hot and buffalo (minus the ranch obviously). I found out later that Brett was right in fact, when I later took some swigs of the hot sauce directly. When Kaoru asked me how it was, I hesitated and replied, “It’s very mild.”

But maybe therein lies the brilliance. 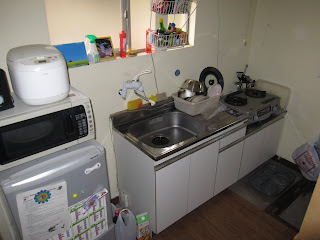 As I’ve said before, too often hot sauce is used to cover up the taste of anything you’re putting it on. Because this was mild you got a bit of kick and flavour, but you can still taste the original food. I used it a fair amount the last couple days, in my Nabe yesterday (hot pot) and on some chicken today.

I tutored for the first time since December on Thursday, and she forgot that I was coming over. She insisted I stay, and I taught while she was entertaining friends and their children at the same time. We all had a wonderful supper together and interesting talks. I don’t get many chances to mingle with little children, but they’re very cute in Japan.

On Friday I went out with 4 others for Katsu-don. “Katsu” means “cutlets” perhaps (and don = rice bowl), but I noticed a couple months back that they are breaded pork chops and I hadn’t noticed for years up until that point, other than having a craving for pork chops.

A number of us threw around an email for most of the week with ideas varying from Ice Skating in Okaya, Onsen (hot spring) in Komagane, gun range in Tatsuno, Planetarium 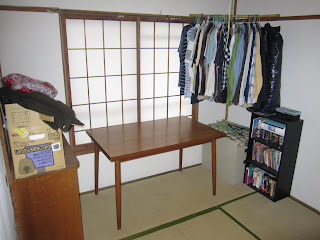 in Ina, curling in Nagano and so on. Eventually it settled on “Tony’s place, video games.” I was ok with that, but I rearranged my room, not knowing how many people were coming.

I much prefer this new layout without that huge table in here. I hadn’t taken pictures to post this week, so now I’m showing what my house looks like; I don’t do that much. It’s very Japanese, with the sliding doors behind the TV/Monitor being all closet space (with my oven) and the other sliding doors leads into the hallway.

The mini table in the middle with my laptop is a “kotatsu” or a “heated table.” You plug it in and it keeps your legs toasty warm ^_^ In my room, I have “Hello Kitty” bed sheets, and a disco ball. In the winter, the room is a meat locker unfortunately, if you’ve been reading for a while maybe you’ve heard me complaining about the cold. All floors are Tatami mats, except for hardwood in the kitchen. It's not often I write my blog at home, or re-arrange my stuff. I hope you like how my house looks anyways. As a side note I'm writing this up listening to the album "Ocean Eyes" by Owl City. It's amazing if you need some new and great music to relax with.

So anyways, Saturday, Michelle came out earliest to start playing games, and I made the mistake of drinking 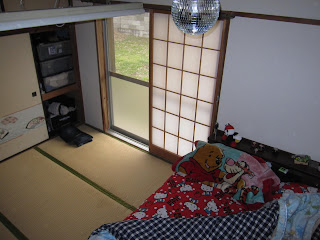 that ‘sho-chu’ (A type of Japanese alcohol, different from ‘sake’) Ike talked me into buying that made me sick during the Mardi Gras party a while back. What I do remember of the night was really fun with friends I haven’t seen in a while, playing Mario again and talking. I never blackout, so it’s embarrassing to think I might have. Sunday was a slow, slow day; we’ll leave it at that.

Today in comparison is much better. I ran some errands like updating my license, buying bus tickets for tomorrow, and tonight I’ll have a leaving party; I don’t think I’ll be drinking. 3 of our 9 regular teachers got transferred, so we’ll send them off with an “enkai” or “work party”. You have to love Japan’s style.

Ah yes, and I got my Christmas presents in the mail on Thursday. Thank you everyone! ^_^ I hope to watch the Christmas DVD with Ann later this week.

"We ourselves feel that what we are doing is just a drop in the ocean. But the ocean would be less because of that missing drop." -Mother Teresa