Everything is New Again

When I go to bed at night I ask myself: “What was the best part of the day?” Of course it’s silly to try and rank those things, but it leaves you to ponder happy thoughts and be thankful before drifting off. There have been many happy things to think of this week. 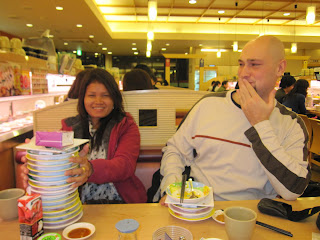 in Shinjuku. It was a long, somewhat expensive trip to pick her up and quickly go back to my place because I had to work the next day, but she was tired from the traveling (the plane left at 5 in the morning) so it worked out; in total I was on the bus around 7 hours and the train for over 3.

It took her over an hour to get out of the place after her plane landed, just enough time to get me worried. I guess that movie “Taken” still has me a bit paranoid. Most times losing your cool is a choice I think, and is never productive. Panic is contagious, why spread it around. Turns out it took so long because of the language barrier and filling in paper work with questions she didn’t understand, like ‘do you have any weapons’. (Does anyone ever say ‘yes’ to that?)

By the time we got back into Shinjuku, it was almost 6 already. I had ideas for things to do in Tokyo, but she was tired and we knew we’d be back soon anyways for proper adventures. I changed our bus tickets and we had an hour to kill, so we got some supper. There were many offerings, but she chose an Udon (big noodle) shop that had a clever speaker outside the door so you could hear the kitchen noises from the street.

It was really good, but the cool treat came after when I remembered a vending machine nearby has Dr. Pepper in it (it’s rare in Japan, which is why I remembered its location). I think that was her first time seeing a vending machine, as I wrote before Thailand doesn’t really have them because maybe they’d be robbed often; I’m not sure. Regardless these machines are pretty cool, with hot and cold drinks inside.

She fought me away from the machine so she could trying buying from it herself, picked a hot coffee, loved it, and I could tell this would help make her day in Japan. For a bit she was sure to point out machines that she saw, and I reminded her a number of times that you can find those machines on literally every block in Japan; it’s ridiculous. Wikipedia tells me there is 1 machine for every 23 people in Japan (almost 5.6 million).

We got back to my place after 10, which gave little time to give a tour of my Japanese house so she could survive while I was at work the next day. I showed how the toilet works, my water heater for coffee, various heaters, the shower and so on. She brought some comfort food from Thailand, so while I still needed to go shopping she wouldn’t starve.

The next two days, Wednesday and Thursday at school were pretty good. It was my last class with my first year students, so we played that lovely game ‘99’ the whole time. 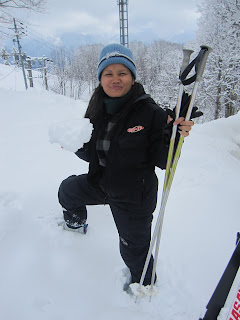 I seemed to find an easier/simpler way to explain it, so they understood a lot faster and had a great time. When I went home Ann was always sleeping, but I guess she went on walks all over town for hours both days, which I find rather brave considering she had no map, no way to talk to people, and forgot her passport at home both times (I stressed she needs it if the police ever stop her)

After I got home Wednesday she had already eaten Thai noodles, so I put some rice in the cooker, showing how that worked too, and that I put a bullion cube in to flavour the rice. Richard called though, and offered to drive us for sushi. Thus we went to my favourite restaurant with the sushi train and conveyer belts: Kappa (monster) Sushi.

Ann ate 4 plates while I ate 14, but she loved it, even the weird fish eggs sushi. Apparently she doesn’t like Wasabi though, because she ate a bunch of it one time not knowing what it was, and burnt her mouth so bad she was crying. It went something like that anyways; her stories are crazy and hard to understand sometimes.

We went to my place after so Rich could use my computer, and I finally popped in the Christmas DVD I got. It was great to watch, and a bit sad at the same time that I missed 3 Christmases already. It played one after another and the only complaint I have was the best part of 2008’s Christmas was edited out; when John was screaming bloody murder at his Japanese porn DVD when he found out it was censored. John is an awesome guy; Rich said, “I’d really like to meet that dude.” If only I could convince him better to get out of his house and travel more maybe.

John always said “Ni Hao” (Hello in Mandarin) and “Ichi-Ni-San” (1,2,3 in Japanese.) Uncle Francis always did the ‘Tony Wave.’ The girls always gave John a hard time for being his goofy self. Mom always had an amazing roast chicken or turkey that was huge. I was glad to see most of the Schoenroth and Untereiner families after so long, I’m happy everyone is doing well.

The next morning we used the rice we didn’t eat to make Onigiri (Rice Balls wrapped in seaweed). I got a used car later to use until I leave in July/August, 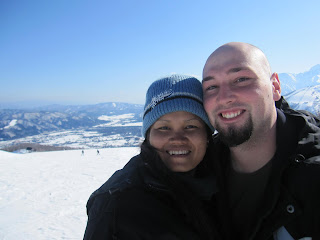 and we met up with Rich and Molly at the Brazilian restaurant. Rich gave me his spare road map and some tips on going north for some skiing. It was a tough decision because Dougal was having a potluck party I wanted to attend, but it snowed that night, Friday wouldn’t be busy, and it was going to be a nice day. The ski season was rapidly ending, so I felt a bit under the gun there.

We left really early, drove for 2 hours and Ann saw snow for the first time. We rented gear and got lift passes at a discount because the season was almost over. We took the 2km gondola to the top, and I went to a patch of fresh snow and ate some. Ann thought I was crazy, but as long as the snow is fresh why not. She tried some too and liked it; her first time holding snow.

We spent a good while at the top trying to get over the basics of slowing down, stopping and some turning. After that, we took 3 hours getting down that hill the first time, but her progress 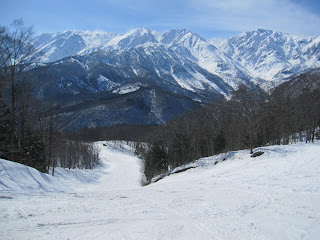 was amazing I think. One thing I seem to do a lot is stress how easy something is. Once you start telling yourself how hard it is or impossible, then it becomes so. Take it slow and easy then it won’t be so bad. Divide and conquer one step at a time.

We stopped for lunch where I got talking with the waiter for a bit. As Rich taught me, being friendly to the staff in Japan and talking often has many perks; he gave us some fresh sliced apple for desert. Ann had Ramen here for the first time and impressions were good again.

We went up to the top again and tried another path down the back of the mountain. It wasn’t marked very good at all and although the beginning of the one path was super easy, it quickly became difficult when it was too late to go back. Ann ended up walking over the most difficult parts. We got back up to the top and started our way back to the car. It took 3 hours that morning, we were tired, and the hot day had a lot of the snow turning to slushy ice. (I skied half the time with my coat open and nothing on my head)

It was a slow process, and at about half ways she started walking down again carrying her skis. There was about 1 km left, 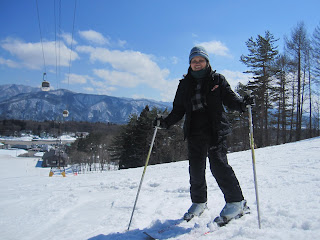 and I bugged her a bit. She put her skis on again, and then had a nasty fall, jamming her knee on a mount of ice. The rescue team ended up wrapping her in a cocoon and taking her down the rest of the hill. I felt horrible for pushing her when the conditions were obviously terrible.

I rushed down the hill to meet the rescue people with her, and got horrible windburn on my face that is still peeling. The slush/ice I was skiing on burnt my legs something fierce. We were going to stay the night at the area and join other teachers for a bonfire and festivities Saturday, but Ann wanted to go home and I don’t blame her. On the way though she wanted more sushi so we stopped by for supper there.

The injury grounded us for most of the weekend, as she could hardly walk around the house. Today it’s a lot better, but it was a slow recovery. We played some video games together, but later she just wanted to watch me play. I felt like I should be entertaining her better, but she seemed to really enjoy it, helping me out and making her own sound effects. She thought she was watching a movie, minus the part where I died all the time.

We also watched some movies, apparently she’s never seen Star Wars and before long we watched the original 3 and loved them. I taught her how to cook some easy dishes, and we watched South Park while we ate them.

Monday was a holiday so I didn’t update then. Instead we made it to my local planetarium for a show. This time their show after the stars was about bugs, and their names used as Greek Gods and/or constellations 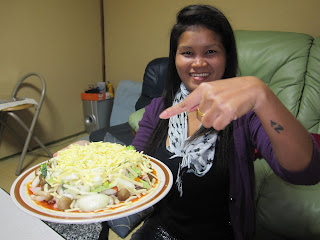 like Atlas and Hercules. After we went shopping for much needed supplies, and I went a little crazy thinking of all the things we could cook together like Nabe, Pizza, Lemon Chicken, Cheese Cake and more.

We ended up just making Pizza and Marshmallow Cheese cake that night, cooking while watching “Planet Earth” on blu-ray. We made separate ones, and it was her first time making a pizza that ended up resembling a huge sandwich. Because she stuck so many veggies in it, when it was done there was quite a bit of water. So much so, she spent the first 5 minutes eating her pizza like a soup with a spoon.

Needless to say, we’re having a lot of fun.

"It's not what you do once in a while; it's what you do day in and day out that makes the difference." -Jenny Craig