Conferences and Food for Thought

I spent a lazy Monday morning relaxing. My teacher asked me about a class later, and I realized I had 4 classes for the rest of the day, so it was a busy time; it’s a shame I couldn’t post this on my regular Monday.

Well last week’s conference/birthday was really nice. I was surprised just how good it was actually. They had intelligent 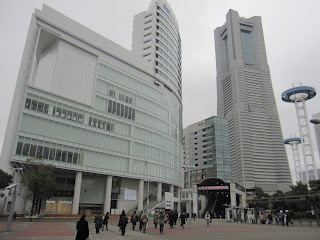 and down to earth people giving speeches. It was just too bad that when the “questions” came up, it tarnished the experience a bit. They weren’t really questions as much as people bringing up talking points, politics and getting face time, while wasting everyone else’s time.

You know what I mean if you’ve ever seen politics on the news. It was a bit disturbing, but maybe these people don’t know how to ask a proper question? I’ll try not to let it bug me too much, but everyone there had degrees, and they’re at an age that can’t be passed off as “young and stupid”. I could tell this troubled the speakers too. Atleast it wasn’t the majority of people.

That aside, I really enjoyed those two days. I skipped the third day because I wanted to join my students’ graduation. Before heading home on Tuesday though, I finally met up with my Tokyo friend Reiko. We have chatted and sent emails for well over a year, and now we finally met up for the first time. I really enjoyed it, as I consider her a good friend.

I think we tried to go for Italian food, but when we found it closed she suggested fast food. I didn’t care where as long as there was beer; as while the meeting was good, it was pretty intensive. We went to the outback steak house, which I wouldn’t consider fast food, and I had some baby back ribs for the first time in years. It was so tender.

Reiko, or "Kiska the Russian Spy" as she likes to be known as, is changing jobs soon, so she too will go on some vacation 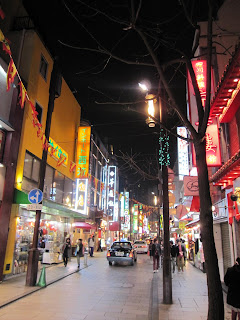 adventures. My Hong Kong trip fell through, so I’ll live vicariously through her vacation. I’m mostly excited for next Tuesday when Ann arrives, so I haven’t made any plans like I did last year; I believe for that spring break I visited Canada. I’ll have lots of time for that this summer, hopefully with Neal too.

I didn’t get home until late, sometime after midnight. Regardless the graduation was good, as was the following party. It was weird though, because we got lunch at noon, and the party started at 2. I wasn’t too hungry at that time yet, but the food was still amazing.

I had some classes Thursday, then Friday I was in Nagano city for another meeting. This one was a stark contrast though to the useful one I was at earlier in the week. After hours, my (secret) hero Preston went up to present, and summed up my feelings about the meeting thus far: “I sit here listening to all that stuff, and I wonder, what does any of this have to do with me or teaching?” I wanted to applaud him. The other highlight too was when a Canadian teacher, Will, snuck into his slideshow of quotes from his students a picture of the Canadian hockey team with their gold medals.

After the meeting, we half planned something of a late birthday party at the local Round One, but we didn’t really plan it out well and most people went home so we did too. That’s ok though, it was a crazy week, and I slept in the car along the way.

The weekend was really laid back as well. I should have been getting stuff done, but I partly rebelled against 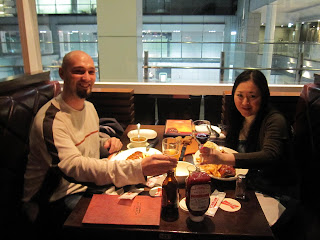 myself and just took time off. Also it rained all weekend so I was reluctant to leave my house. I was able to thank people for their birthday wishes and catch up on movies I had been meaning to watch for months.

It was just a good weekend, even if I can’t find much to say about it. I guess that’s good enough on its own right? Now I'm just counting down the days until the 16th ^_^

"If you can't see the bright side of life, polish the dull side." -unknown