I had my first couple classes for the year, and I wanted a picture of myself in the cool dark mafia look I had going so I dressed up again for one of my first classes. (I posted the picture in the last entry) This year I’m trying something new: getting pictures with the kids holding up name cards, and then trying to memorize their names. Class just goes a lot better if you can call them out directly for answers, or for them to stop screwing around. Not to mention of the doors getting personal with them opens. (favourite music, movies, etc)

I saw one of my students working a part time job, and the next day at school she visited me and asked me to be “shh” about it. Haha, she’s not the first. Yayoi doesn’t let their students 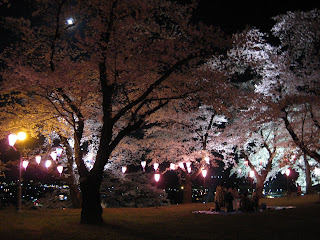 hold jobs; they figure they should be studying or doing clubs instead. Tatsuno is a different animal entirely; where most students won’t continue their education past high school and many have jobs though school.

I’ve been fighting something of a cold, so maybe I need to take it easy more. I don’t know. The school nurse gave me some medicine and I’m mostly better now. Regardless I’m not studying Japanese as much as I’d like or should. I’m busy going out every night it seems. This the season of cherry blossoms!

Friday night was my first picnic under the pink wonders. Neal said he went every day last year, and I didn’t go once! If I remember right, my mom and I figured it was always too crowded to be enjoyable, and well, we were having a blast with the other wonders of Japan. Richard and his friend came out, and we went shopping for picnic supplies at the grocery store first. After that, we indulged ourselves on good food, drinks and beautiful sights. They put up lights and it’s really pretty being surrounded by pink trees. There was a full moon out, the weather was perfect, and it was amazing.

We were there for hours, and later wandered to a nearby playground. We goofed around for a long time on the swings and various toys set up, and got some cool photos. For example there was this dolphin there that rocked back and forth. Since I weigh a fair amount, I could really get that sucker rocking! I rocked it so far back, that my back and legs would form a perfect right angle, parallel with the ground and straight up in the air respectively. Then I let one hand off and rode it like I was in the rodeo. There are some cool action photos; I have to ask them to email me some and post them later.

We went back to my place when it got late, and watched some new DVDs I bought while in Canada. The series is called “Blue Planet” and it’s a bunch of BBC Earth documentaries. That stuff is always fascinating, and watching it in high definition was unreal. We watched as much as we could, until we were all literally asleep, and I turned it off early so we could call it a night.

Saturday had a number of opportunities again, and I took them this week! As much as staying in my house and doing nothing is fun, these cherries blossoms are rather brief. Locally, I could go to a huge party in the park near my house, or go to the castle for another picnic and farewell party for Shane, who will be missed when he goes back home. I ended up getting on a train for Neal for 2 hours all the way to Kofu for a “Shingen-ko” Festival. There was a famous general in Japan’s history being celebrated by thousands of people dressed up in Samurai outfits. Along the way, we were treated to the beautiful, colourful countryside, enjoying the transition to spring. We were even close enough to see Mt. Fuji rolling in the distance.

Neal and I walked around the ruins of an old castle, took in the sights and sounds, and ate so much festival food it was comparable to my gluttony in Canada. Every 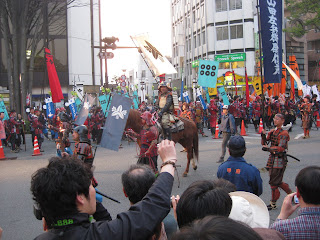 time I wasn’t stuffed to the point of pain I’d buy something else that was tasty, and there was lots! Takoyaki (octopus balls), yakisoba (fried noodles), thick strips of bacon, pilafs, sausages, ice cream, stuffed potatoes, okonomiyaki (Japanese pancakes), BBQ, glazed roast chicken to die for, micro brewed beers, and various other things I’ve never seen before but tasted lovely. It was a hot day too; we did some sweating as we roamed.

I thought there would be a mock battle with the samurais, but that was not to be. Instead, they shut down around 8 city blocks around the train station, and filled the streets with samurai. There were thousands like I said, wearing different colours and different banners from different prefectures and, less traditionally, from company sponsors. They even had horses out on the street carrying the big shots, and the outfits were quite amazing. On the loud speakers they played battle music while the famous general barked out orders. This went on for hours, until it was dark. Neal and I got home all right that night to rest up for Sunday’s adventure: Takato.

Takato is about a ½ hour drive from Ina. It’s an isolated little town of around 1200 people; the nearest train station is a ½ hour drive away so access is limited. But this little town is in the top 3 ‘best’ places to see Cherry Blossoms in Japan. That being said, flocks of thousands come out as Japanese people are crazy for their Sakura (cherry blossoms).

I got some tips from Richard about a little known route to get there. It should be a ½ hour drive on a normal day, but since it’s so 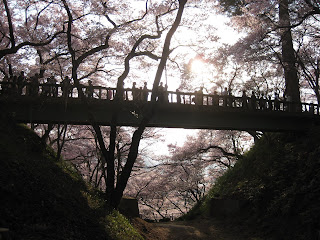 crazy it’s 2 hours or more waiting in traffic to get there. Thanks to Rich, we made the journey in 45 minutes. We still had to park about a 20-minute walk away, but things turned out ok. I picked up and went with the Philippine girls. Charity came back for another work term, but there were 3 new girls: Gwen, Jolie, and Watan. The car ride was filled with the standard questions like: “why are you single” and “what’s your type”. They’re fun though.

Takato is a beautiful place, even more so when the area is blanketed in pink. We stayed for hours taking pictures, talking and walking around. I didn’t eat as much festival food this day, as I was a bit sick from stuffing myself Saturday. Maybe that’s why I had something of a flu? I like how the girls are pretty straight when they talk, like Charity told me to keep my hat on (guess she doesn’t like the hair cut) and said something about how I became fat. Haha, maybe that’s why I didn’t eat so much this day; I still got time to work it off :)

Yea, just beautiful. I can’t say too much; it’s just pretty. You go there, and you relax. Thinking is optional, so sorry if I’m at a loss of words to describe these pink wonders (the trees). We were able to catch up with a bunch of other JETs and people out on a picnic of their own and that was fun. It was there we made plans to meet up again that night at Kasuga park, where I went Friday night.

At Kasuga I was free to drink since I wasn’t driving anymore and could walk home. We met up with Rex and Dave; two other Canadians and they spun glow… sticks. Think 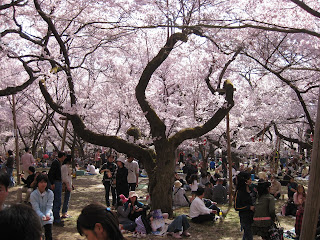 of fire spinning poles, except with flashing lights and less getting burnt. One thing led to another and they taught me some techniques of spinning them around. Regardless it makes for great pictures, and it was fun twirling around. We all hung out, spinning sticks and having deep conversation until the park turned off its lights at 11:30. Time for bed I guess, there was work to be done the next day.

"One's destination is never a place but rather a new way of looking at things." -Henry Miller