My last Canadian entry ran long, so I ended it somewhat abruptly. I got back and I was lugging around 75 kilos on my back. The backpack and the carry-on were ok, but when I had to deal with that, and carry around a bulky oversized hockey bag which was over 30kg by itself; things got challenging.

I dragged it for a little bit, not very far, and when I got home I discovered I made some holes on the bag and some items inside got damaged, the worst of which being the power supply for the new computer. For 20 magic points, I cast my “powers of Electronic Systems Engineering” and patched the damaged/exposed wires with electrical tape.

I went to Ina instead of Tatsuno as that’s where my new house is. I ended up taking the taxi when I arrived even though I live a 5-minute walk away. Those 5 minutes are up a steep hill, and I’ve been drifting in and out of consciences due to exhaustion the last 20 hours or so, so it wasn’t hard to justify the $7 fare to get my heavy luggage home.

Once unloaded, I unpacked 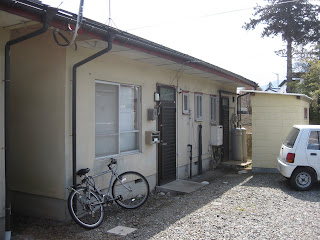 what I would need for the next day and took the last train to my old house in Tatsuno, where I spent my last night there. There I could shower, get my car, go to work and be ready for the moving van first thing in the morning. (pictured: my new house and car)

A couple trucks came and the big things were moved. I spent the majority of that day unpacking, and then later cleaning the old house. I got an unbelievable number of errands done with Matsushima sensei, my Yayoi Caretaker not until Uchiyama sensei. Things like electricity, water, registration at various places and other things I need not make you yawn over while reading. I know I’ve become much better at skipping over filler information I come across…

I sure spent a lot of time cleaning and unpacking and moving into my new house. By Sunday night it was all done. I am extremely happy with my new place; it’s such a good feeling. Little things like not hitting my head on the lights all the time, walls that aren’t cracked and dirty, and doors with doorknobs like the bathroom make for a more “home” feel, compared to feeling like I was camping.

I got Internet hooked up, and the couple of guys that came by to do it were pretty funny. They tried really hard to communicate and we had fun. When I was telling them how cold Sask gets in the winter, somehow I was able to understand them asking if your pee freezes before it hits the ground. Another funny thing was when we were looking at the “gigantic” church in my backyard, and they started talking about zombies. Haha those guys were something else; that led to talks of video games among other things.

I met up with Richard on Wednesday for supper at a Brazilian restaurant with huge burgers, and we played some video games after at my new pad. Responses so far to the haircut, or lack there of, have been positive. It’s funny explaining how calling someone a “skin head” is a label not unlike calling someone a “biker”, either way I’m learning to not let it bug me. The biggest shock so far came from Matsushima Sensei, when she fell backwards a couple meters in shock, and stared. The best thing though, a lot of people tell me I look younger now; not that I should be worried about that stuff anyways at my age, it just sucked hearing constantly how I looked like I was over 30 before.

On Friday, April 3, I dressed to the 9’s and attended something of a welcome ceremony. I’m pretty good at handling standing out, but I was surprised how hundreds of students screaming in excited shock still shook my constitution. I thought I looked pretty awesome with my vest and tie and shaved head. One teacher came in and saw me and started yelling “Kowai! Kowai!” (it means ‘scary’) over and over. I guess I looked like a hardcore gangster! Anyways, that night, we partied :)

For $30, we sure put back a lot of tasty food and great drinks. I was shocked 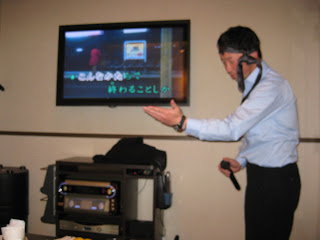 when I started to mix my whiskey and coke, that most people thought I was crazy. I mean, you can buy them at bars everywhere in Japan, I thought they were common too. I guess bars aren’t too common upon reflection. So I went around and shared my culture in the form of tasty alcohol, and they tried to share theirs:

More than one person: “have you tried mixing it with water too?”
Me: “Water? No, that’s crazy. I’ve tried it before when I had no pop, but it tasted bad”

Ah, cultural exchange at its finest; I sound like a jerk in retrospect. I never did mix it with water although a couple people brought me a glass of it. The people who did know my drink called it a “cola-shu”, and made mention of how they maybe tried it once before back in college.

That’s almost a problem with the “all you can drink” parties, because you’re given a time limit you suck back as much as you can before time runs out. I had an amazing time and then we went out for Karaoke after. It wasn’t long into the first song before the one dude busted off the tie, and tied up around his head like a headband; something you see in Japanese cartoons quite often, and they told me it’s “Japanese culture” haha. I snapped a picture, and I don’t think he liked that.

I hope I didn’t buzz kill the party as it was somewhat standard after that; still fun though. They didn’t pick many songs so there were many lulls, of which I waited shortly and then picked up the machine so I could burst out another song. I sang maybe 40% of the songs that night, and I tried to sing along with the Japanese ones they did to practice up on character recognition. Or something. You make weird rationalizations when you’re under the influence.

We the rest of last weekend had a lot of potential. I was suppose to have another work party Saturday night with Tatsuno, but got a message the night before saying it was cancelled due to complications. I 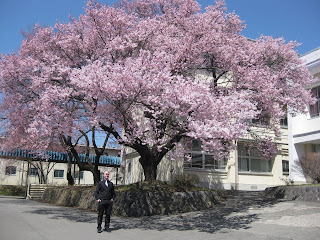 had already cancelled out on my friend Megumi and her cute girlfriends in Tokyo for nights out on the town. Richard had his B-Day too, but despite sent inquiries I didn’t get much for information. In light of that I also called my Philippine friends. They were busy with shopping so we never did get together.

That left me with an amazing weekend of anti-socialism, plugging an absurd number of hours into a new game of mine, Valkyria Chronicles. I’ve never played anything like it before and it’s ridiculously fun. I’ll maybe make more of an effort to get out next time; I sure met a lot of new people in my short time here.

I wrote this update last week, and since it was short and I just finished posting the Canadian adventures I decided to wait another week and put the 3 weeks into this one post. A lot happened though so it will get its own post, I will put it online Wednesday so wait for that to hear about my good times with the Cherry Blossoms :)

"We are no longer happy as soon as we wish to be happier." -Walter Savage Landor