On Monday night a group of us went out for what ended up being our last time under the cherry blossoms. We went to Takato and got to see it at night now, and it is maybe more enjoyable during that time. The crowds weren’t so crazy, and the sights looked different. For example there was a ‘reflection pond’ which is pretty boring during the day, but at night it was reflecting beautifully the trees above it, interspaced by pink petals floating on its surface.

We were to meet again Tuesday, but hard rain canceled our plans, and largely knocked down the rest of the pedals for the year. It’s too bad the 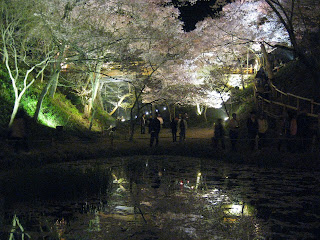 pedals didn’t float down again like they did last year, but it was still nice to enjoy them while they stuck around. It sure was a brief bloom, but last year is hard to compare to as mom and I went around the country, catching them at different times, so it seemed to last weeks in that respect.

It just happened to be coincidence that I had a Japanese class instead of being rained out that night. Again I was disappointed with my own lack of effort as of late. Since classed are in full swing now, there isn't much time to study. Any free time has been spent trying to memorize the students names in some of my classes. Because people were busy Wednesday, it was the first time I cooked something instead of eating out in weeks; ironic in that Wednesday is usually the day I eat out. It rained a lot, and I slept with my window open to take advantage of that. I love the spring.

On Friday a teacher came and asked me to play volleyball with the kids. I’m not going to refuse such a fun sport so I joined. We passed the ball for a warm up, and then the kids did some drills that I didn’t care much for, so I sat out. Later we scrimmaged! The big reason I want to play volleyball again. I don’t want to practice for hours, I want to goof around and have fun playing games. I didn’t do too much; in fact it has been so long the first 5 attempts to hit the ball had me swinging at the air. My timing is off because I couldn’t get nearly as far off the ground as I used to maybe. Thanks to muscle memory I’m sure I can be jumping high again soon enough.

Needless to say my body was grumpy with me after. I knew I needed to take it easy that night, so I went out to see my new town a bit; and have some beers to tenderize my sore muscles. Sure I didn’t see much, but I got to try a new ramen restaurant, and was entertained by my crazy students while I was there. Before they left they asked me if I liked “Adult” in a Japanese accent. They were talking about porn, but in those cases it’s best to pretend you don’t understand; at least that’s my policy. They were giggling and lost their courage soon enough and shuffled off to pretend they weren’t talking about dirty things out in public like that. You know how it is.

After the ramen and the beer I went to Hiroko’s, she has the Vietnamese restaurant. There is always a good atmosphere there, and it was good talking 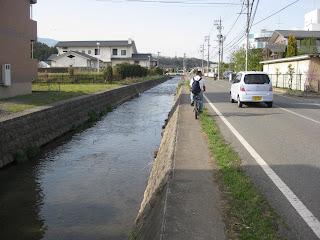 to new people. Rex was there with his mom too; she came in to visit from Winnipeg. When we all went home, I tried to watch a movie called “Baraka”, which is visually stunning and amazing. There is no language, just a bunch of artistic shots of different things like different cultures, religions and sights. As good as the movie is, it is not to be watched while sobering up while your body is sore and exhausted; I passed out on the couch and missed most of it.

Saturday had a slow start, but picked up when Neal messaged me about going for lunch at Hiroko’s. We had some great food and conversation, and all went together to a photo exhibit in a town center nearby. Some local people are photographers, and it was really neat seeing their shots posted up on a wall. I don’t ‘get’ art, but I appreciated visually stimulating works; part of the reason I tried watching that movie the night before. One of the shots on the wall was Neal too, which was pretty funny. I thought it was a really cool shot: he was simply eating some food. There was a cool look on his face thought, one of deep reflection, and the photos were cast in black and white. Interesting for sure, Neal asked for a print as well.

I was sore and wanted to play games, but the day was just too beautiful, and Neal was going out biking. It was good of him to give me the kick I needed to go out and see the town, and the pretty ladies walking around enjoying the weather like us; it’s hard to describe how happy I am to be out of Tatsuno.

We cycled around for hours, snapping pictures, talking and finding new and interesting places we didn’t know about, like a sports bar, and a little park for couples. We met up with the Philippine girls on the way back to my place, and picked up ingredients 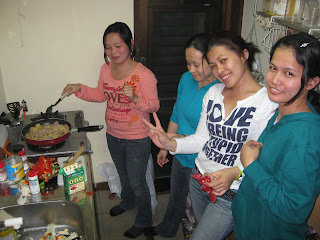 for pizza. Ike came over later, and for hours we cooked and ate different foods. He’s a good cook, and the girls made up a dish of their own which was quite tasty. When the oven was off, we had enough power to put on a movie so we watched some stuff. It was nice having guests over, and pretty cool a ‘party’ could be formed that fast and turn out that well. It was similar to the parties I had back in Canada. I’m so glad to be out of Tatsuno.

On Sunday I slept in, then tried out World of Warcraft to see if John was online. He came on briefly, but since it was Saturday night for him I’m sure he had something more fun planned. I was surprised I played as long as I did; it was actually kind of fun. Usually I just log in to talk with him, but enough changes were made and my new computer is fast enough that a number of other things in the game were able to hold my attention. After, I played a different game, Fallout 3, until late and then went to bed. Oh and I had clam chowder soup with hotdogs for supper, which tasted better than I ever thought it would. It’s nice how hot dogs are an all purpose meat if you want to give your meal a bit more girth. I’m only cooking for myself so it doesn’t have to be gourmet, it just has to taste good :)

“You can’t respect someone who kisses your ass. I just doesn’t work” -Ferris Bueller