Can I have a helping of encore?

The weekend was just starting it seemed but here I am, full circled back to Monday. I’m glad I cut off when I did last time as last Monday something absolutely amazing happened and I didn’t want to rush through it. It all started when a student was asking if we knew what a mandolin was. We were like “Mandarin? Like Chinese?” One thing led to another and we happened upon the music room where the club practiced mandolin, guitar and cello. So a mandolin is like mini guitar with a half-egg like main body. 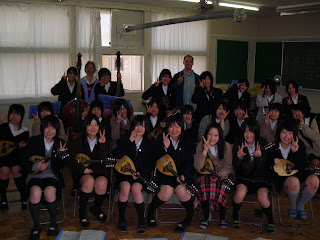 broke out into a little song for us. That was cool enough for us as it had a good beat. In the next room we wanted to hear some cello, but something got lost in the translation/crazy gestures I make. Before we knew it, the music building was stirring like a beehive and the place was quickly transforming into an orchestra. They set up 30 some chairs for their band to sit on, then 2 chairs right in front for our own personal show. This was exciting enough and they quickly were organized and ready to perform, but when they actually played… wow that was something else. We were absolutely engulfed in euphoria of amazing music.

I never really heard anything like it before, but it worked so well. The first tune they played was a happy upbeat song that had everyone swaying back and forth. It was easy to oversaturate them with well-deserved praise and compliments, and our sheepish inquiry of an encore was well received; we were afraid of looking greedy after being given this gift of solid gold. The second tune was a slower; heart-pulling one that actually got me chocked up it was so beautiful. I was smarter and took a video this time and can only profusely apologize to you about my camera’s poor quality sound recorder. It was difficult to film as like I said, there we were front row, like 1 or 2 meters from their instruments as they played beautiful music for us without a composer or sheet music to help them.

We quickly exhausted all compliments that we could summon from our blown minds and they wanted to play one last song for us. This one came from an anime and certainly was lively. A teacher showed up later and took our picture with the band and we parted ways, trying not to look greedy after being greatly humbled by this unspeakable act of kindness; such an act is undeserving of us mortals.

We walked around and mom got to see Japanese soft tennis, and also a practice session using those traditional Asian string instruments. They’re hard to describe as they’re made of long strings, sit on the floor and are played slowly. You’d know it when you saw it. 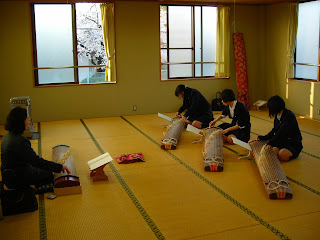 ate to our heart’s content after journeying through another park and temple that were graced with the presence of blooming, beautiful cherry blossoms; the ground covered pink in soft pedals. The next couple days were kind of like the last. We watched more school clubs (saw kendo finally), went out for tasty Japanese food like ramen (eating out almost every day), and taught similar classes, as it is the beginning of the school year. One day I ‘made’ supper that was quick and easy but still somewhat impressive for mom so that scores me some brownie son points I guess.

We had been getting a lot of rain, but on the sunny days it wasn’t too hard to give myself a kick to get outside and just gawk at the massive trees and their blooming pink wonder. A number of classes seem to go outside to take advantage of this weather, causing us to have some interesting conversations with the kids while we stroll the grounds, as they don’t like talking so much when they’re in class.

On Wednesday mom was treated to trying out the Japanese tea ceremony. We did the cookie and bowing and all that formal stuff… awkwardly on a chair. Traditionally you sit on your knees but that’s ok. Mom tried to pawn off her tea on me, but I more or less told her I wasn’t going to drink it for her and to suck it up, as it was only a couple sips anyways. If I had known she would be that scarred from drinking tea I would have helped her out, as for the next hour or so she wanted to puke. Even now when you mention it to her she gets shivers and gags. I think it’s actually pretty good tea; not great, but good.

We went out for food with my good friend Neal and had a great conversation for hours over tasty Chinese food. They have restaurants here that make me feel like I’m back in China the food is so tasty; I can’t remember if I ever got that feeling back home but most likely not. One dish was chicken mixed with cashew nuts covered in tasty sauce; another was marble chilly tofu among other tasty dishes. 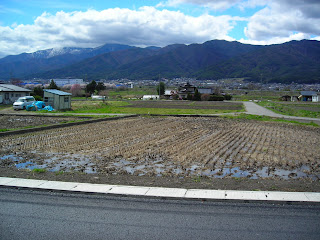 got a tour of the nearby hospital that is a 3-minute walk from my house. I believe Jake was saying something about how the hospital would be closed soon as a new one was opening elsewhere, which might explain some of the equipment that my mom saw. She was thoroughly impressed with the people and the tour as her one-hour visit stretched over 3 hours… and I taught classes at school. Ah well, they’re a lot better now that I’m mostly back into the swing of things. It was rather stressful those first couple days, especially when I felt I should be entertaining my mom. I gave her puzzles to work on during downtime so we can both relax. I almost got her hooked on those “nanogram” puzzles and they’re lots of fun, more than sudoku anyways.

Well remember how I was complaining what a long week it was? That was because I had a very busy schedule, and a 6-day workweek. I was really disappointed I had to come in Saturday, as I had a martial arts festival I really wanted to attend; I was to participate in things like Judo, Kendo and some other strange arts I hadn’t heard of. After working out the math it simply wasn’t a good idea to go, so we took advantage of the great weather and went on a road trip to Ina instead. There we had sushi train again, this time at a different restaurant that has greater variety and cheaper prices. We ate so much that we had to take a nap in the car after before we went anywhere; enjoying the sun beating down on us.

We then went out to Takato, a place they say is maybe the 3rd best place in Japan to see the cherry blossoms. The park was huge, the traffic was great, and the sights were splendid. We were a little sad we had eaten so much, as we were so stuffed we couldn’t even nibble on some of the plethora of festival food they had going on. Right away mom was taking pictures of all the different foods and stands and sort of ignored the pretty pink trees. We watched this one stand in particular for a good ½ hour or so, intent on buying one to take it home for later consumption. On the 11th hour though when the money was in my hand and I was next in line, mom saw the person-in-front-of-me’s bounty. I guess it shrunk a bit and changed color, but either way it wasn’t hard to make us lose interest because of our full bellies and lethargy.

We still had a good time walking around and looking at the trees. There is only so much I can write about them; they are beautiful. We watched a bad movie at home and went to bed early again, trying to rest up with what little weekend we had left. On 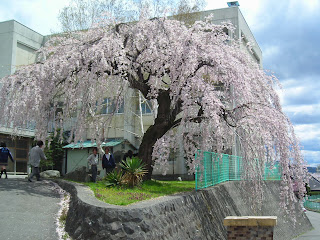 Sunday we went out to Shiojiri for baseball again as mom loves that stuff. Our team won the first game but got crushed in the second game and it was rather hard to watch, even with the high caliber. We watched a couple movies, “Cloverfield” and that new “Rambo”. I thought they were really good if you haven’t seen it yet yourself.

And so here I am at work again for another week; the last week with my mom you could say. My sister, Melissa and her friend Christine are coming to town so things should be lively here soon enough; gone are the days of all-day video games for a good while now it seems.

"Few of us ever live in the present. We are forever anticipating what is to come or remembering what has gone." -Louis L'Amour