Today’s tip: Your mom can get you out of work

Well, school is back in full swing so time and energy is low, I’m having one of my more difficult times since being here, forgetting important stuff constantly and just being sluggish. Anyways, mom got settled in pretty quick at my new home and felt a lot better about me being here; something about having to see it for yourself before you are really convinced. I have a nice house, a fuzzy cat, friendly neighbors and beautiful surroundings. I make sure to point out snow-capped mountains on the horizon whenever they are visible; I love those things.

We went out for ramen at a local restaurant where she met Jake and Junko, my friends living in my quiet 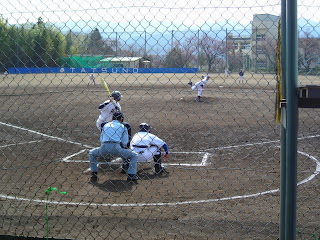 little town of Tatsuno. Mom liked the ramen so much that we went back the next day for some more, at which some students were waving to us. I’m not sure if they are even from my school, but we exchanged some quick hellos. When we were finished they had prepared a tissue pack for us. Written on the package was “take me to your country, I love you” along with drawn flowers and such. So, mom invited them to live with her in Canada, much like she invited Junko the night before and a couple other people; before long she realized “I got to be careful! I can’t have a million people staying at my house.”

Thursday was our first teaching day, and there was nothing to do! It was great for getting errands done, introductions and settling in after the long trip. When Friday came and its two classes mom was ready. Her first class in her teaching career saw students who were shy but happy to see her. It was a little shaky, but great for her first go I thought. The last class was with my best 3rd year students, and she had them eating out of the palm of her hand for the whole class. I’m excited for this year, as that class is made of some of the most enjoyable students I have in Tatsuno. They speak up, they try hard, and they generally just love me.

We spent time after school watching the various club activities and having fun conversations. The captain of the ping-pong team got the nickname “boss” from my mom, a member of the kendo team gave my mom a bamboo sword that they use, and the crazy soccer players cheer at my mom and not only me now when they see us in the halls.

Friday night we went out to Ina for a welcome party. Mom was put in the middle of the table, and before the night ever really started some of my coworkers could tell she would be the life of the party. She talked up a storm, got after me for my face turning red from alcohol, and made fast friends with everyone. “You sure are quiet tonight Tony” was one comment I heard. Ah well, I loosened up later from the constant “he’s my boy” (not a man) comments and was teaching slang like ‘beer gut’, and later ‘geek’ as mom proclaimed me to be. I love those parties and am confident everyone had a good time. When it was over, we had an hour left until our next train, so Kasuga-sensei and the new teacher Momose-sensei treated us to ice cream at a coffee shop to help pass the time; great people.

During our mingling with the clubs, we found out about a baseball tournament that Saturday. When my mom heard that, the slate got cleared pretty fast and there we were Saturday morning watching high school teams battle each other. I had watched a bit on TV when I got here last year; their big 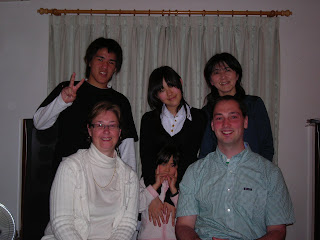 yearly tournament. Seeing it live was something different as it was really exciting. They did 9 innings in a little over an hour and it was great; no 3-hours-of-balls-scratching you get from watching it on TV at home. Here they RUN out to the field and things move VERY fast. Heck one time the pitcher got in 3 warm-up pitches and the first batter got a hit before the announcer finished introducing the starting 3 batters.

Some pitches hit a couple batters and it looked painful; near us they had players with those speed monitors tracking the ball’s velocity. So when the struck batter walked to their base, a teammate would be waiting nearby with a can of freezing or something. They would spray the sore spot with a thick white cloud and they seemed better after that quick first aid. Bases were stolen, some home runs were hit over the monstrous fence, and parents were giving out free coffee, cider and snacks every 7th inning. It simply was a great day out; our team didn’t win any unfortunately, but we still saw exciting baseball.

I can’t believe I put ‘exciting’ and ‘baseball’ together after all that garbage I saw in Canada; the contrast is that great. After the game the players would bow to each other, bow to the coaches, then bow to the audience. There were no angry people (that we could tell) and golden sportsmanship all around.

We were bushed after a day in the sun watching baseball (ya we suck) so we both slept for a couple hours when we got home; and ended up being late for supper at my caretaker’s, Uchiyama-sensei. She invited us out and after coming to pick us up as I forgot the map she made me at work. She also had directions in there saying “700m” and in my absentmindedness thought we needed to be there at “7:00”. Anyways, we enjoyed a wonderful meal at her fabulous house with her delightful family. We met her mother-in-law, who was her neighbor, and she made wonderful crafts that I can’t quite explain. They were like art you hang on the wall but looked similar to quilt pictures. Either way they were beautiful, and my mom got one as a present; She’s getting her fair share of those.

It was a great night out and we even learnt a Japanese card game. The next day we went out to Matsumoto to see that famous castle they have out there. There was some slight rain but we toughed it out and mom got to see the inside of a castle and not the inside of a museum built inside a castle. It was a 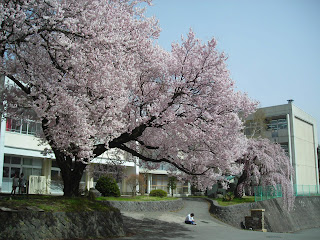 little busy but still interesting to visit; it was beautiful to look out from the upper floor at all the cherry blossoms that were blooming. Later on we did some shopping and ate some of those tasty fish-looking stuffed pastries and canceled out on a couple diner invites so we could go get some sleep; exhaustion being the enemy, much like it is to me right now.

Ya I should end this early, as I’m not really doing justice to many of the great things we have been doing; hopefully I can get back to the Monday-as-usual business soon. I simply don’t have the time and definitely don’t have the energy; having someone being so dependent on you and stuck on your hip is not easy, but you need to cherish the time you’re given right?

"Life is a great big canvas; throw all the paint on it you can." -Danny Kaye