On Wednesday I saw my first eclipse. Well, partial one anyways. Those down in Okinawa could see the whole deal, if it wasn’t raining on them. Where we were it was rather cloudy too, but it helped you from getting too blinded I think, from staring at the sun. It was very much like a quarter moon, except exceedingly bright. Aoi Sensei taught us a trick though: if you punch a hole in a piece of paper, the sun’s shape comes through on the other side. I’ve never really realized this before; I always though the circle of light coming through was round because the hole was round

Turns out it works quite well, and the sun’s shape is beamed through. On TV they showed a parking garage where there were many holes in the ceiling for design, and it beamed all these crescent shaped suns on the car; it was quite pretty. I guess the next eclipse isn’t for another 26 years and it’ll be right over top me in Nagano; but I probably won’t be here to see it haha

That night was a bit strange. I don’t remember why but I started drinking after I got my bus ticket for the airport. I was in the area, and that specialty world beer place looked good. I got some nice lemon beer from the US. After that I was walking home, and passed a little pub that had some of my favourite fried rice on display, so I stopped there for some; and more beer.

Neal gave me a call later and we met up and enjoyed our last traditional Wednesday together. He got a job up in Matsumoto 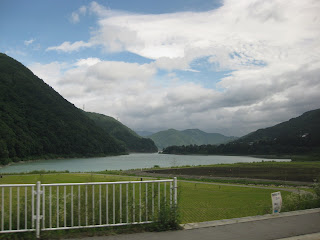 and I’m happy for him, it sounds awesome. We went for Brazilian burgers; but I was too full to eat after my first two stops. We still had a good chat and reflections on the last two years or so: “What can you say about the last year? It’s over! Just like that!” about summed it up for me. How is it possible that doing something different and crazy constantly becomes its own routine? It’s a bit odd I think. I guess I was rather tipsy at that point; the nice lady let me bring in cheap booze from the convenience store across the street.

Thursday was all right; we finished that fun game and I hope the kids got a lot out of it. I think it was fun :) I had my last Japanese class for the next little while because of holidays, so my tutor Kayo and I went out for some yakiniku after to celebrate. The restaurant had some kind of special on where many of its dishes were half price so we went a bit crazy. She’s a really cool teacher; I’m glad we hang out more now.

On Friday night we had a work party to celebrate the coming of summer holidays. Before that though, we went for lunch at a nearby restaurant. I’m really glad they showed me this place; the prices are great, the food is super healthy, and the view is fantastic. Not to mention it’s a 5-minute walk from my house. We had a good chat and meal

Haha as I type this at the Nagoya Airport, waiting for my plane to Sydney, there was an Earthquake rumbling through the building. On Wednesday morning 2 of them woke me up too. It’s pretty crazy to wake up to see your room shaking around you. I contemplated rolling under my bed, but it was over before you knew it. I still think they’re really cool; I appreciate the raw power.

Anyways, Aoi Sensei remembered from the last party when I taught her to “double fist” her alcohol. She’s really cool, and sure enough that night we got pretty trashed. There was a lot to eat and drink, but even more so, there were many conversations going on. It’s great for me to be able to practice my Japanese, the other teachers don’t mind practicing their English, and it’s nice seeing them unwind.

For the second party, I suggested we visited Hiroko at the Vietnamese restaurant she runs. It was great and I think everyone had fun, but slowly they all went home and it was just Hiroko, her brother and me left. We went to a 3rd party together at a nearby pub that I haven’t tried yet. We got a jambla or something, but I don’t really remember this party too well. I just remember it was fun times with fun friends.

Saturday I had to get up early; as usually is the case after a night of drinking it seems. I went down to the station and got a ride with Sheila down to Hase where we all tried mud soccer for the first time.

I wrote a little about it last year, but wow is this place beautiful. I wouldn’t be surprised if it was a national park or something like that. There were 3 fields flooded and muddy, and many different teams from different places. Many had themes, which made it extra fun: like they would dress up like ninjas or wear frog hats/masks and so on.

There were 10 people per team, 5 on the field at a time, and the games were 5 minutes long. This may seem short, but that mud kills you. You try moving around in it, and you get really tired; never mind chasing that ball or anything. It was good to have people to switch out with and catch a breather.

The first 2 games we lost, but the last one we dominated. It’s quite a tricky game; playing in all that mud. We were just there having fun. A girl on the other team would stand in front of our net for example; just waiting for the ball to score. So we would chase her away by flinging mud up. When Ross jumped in after switching, instead of running for the ball he ran towards an opponent and started flinging mud at him. When we lost the game, we would cheer and have more fun than the winners; rolling around in the mudd and flopping down. I learnt how pigs say, “oink” in Japanese: “Buu Buu” so that got some chuckles.

Neal even had his own harem going, as many of his students 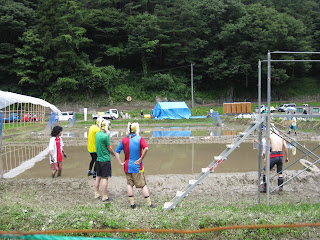 on another team who were covered in mud, would surround him and rub off their mud onto him. We would tackle people and throw them in the mud. We lined up and all back flopped together. We wrestled with people on the other teams, and Neal even got a yellow card for tackling the one girl that wouldn’t stop cherry picking at our net haha. Good times.

I don’t have pictures obviously; given what a mess I was. There were many people around taking them though so I’ll find a way to post some eventually. We went for onsen and spicy noodles after, and when I got home around 2 in the afternoon, I crashed until the sun set pretty much haha. I guess I was pretty tired, and had a good night of R&R.

Sunday was pretty cool too; I’m surprised how little I got done. In retrospect I could have wrote this up then, but oh well. I watched a couple movies and just relaxed. Packing didn’t take long. One movie was called: “Hard Candy.” It’s super creepy and disturbing, but maybe that what makes it such a good watch.

Now I’m in Sydney; but those posts are for another time :) Only two teasers to say about that so far: what a GORGEOUS city, and I should have packed warmer clothes…