Heh, as much I wanted to edit out silly parts of that last post, I decided to just leave it. It’ll be good to look back on and laugh someday; of course I don’t have ‘only’ bad experiences. Also, I didn’t post yesterday because I was drunk again; this time it was Patricia’s leaving party and we sang karaoke until midnight.

Other than that, the heat and humidity is absolutely 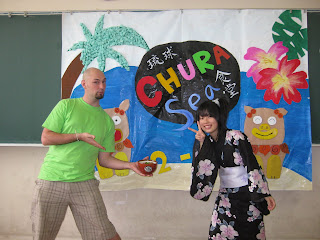 killing me right now. Maybe writing will help get my mind off how simply uncomfortable I am. As soon as I get home it’s cold shower time, then hoping I can dry off with air this thick.

Uh… I don’t remember much from the week. My tutor said I look trimmer now, which made me super happy given how I just ballooned 5kgs or more. I wanted to go to the gym more, but of course I got busy again. Oh ya, I had ramen noodles Monday with Richard, ramen noodles Tuesday with Michelle (or was that last week? god it’s hot out) I think there was a party Wednesday for something, Thursday was Brett and Kaoru’s house warming party which was fantastic. They made so much food and all of it amazing. Friday was yet another ramen party, which was good times, maybe doubled as a going away party for Neal I don’t remember right now. Was that Wednesday’s party? Anyways, I got the spiciest ramen again, I love that stuff.

Many people were leaving for baseball and sumo in Nagoya, and I really wanted to go, but I was sticking around for Yayoi’s school festival. I don’t know how much you remember from last year’s post, but it will save me lots of writing as I’m dying right now. On Friday morning they were suppose to set up still, but it was raining, so we went to the gym and watched a movie. I finally saw “ponio (ponyo?)”, it’s something of a really famous Japanese cartoon that came out last year, if for anything else the really easy, (and quickly annoying) song that loops over and over that everyone can sing it verbatim.

In the afternoon the kids had a dance contest, which was really cool. They did musical numbers up on stage to various things, including Jackson’s “Thriller” 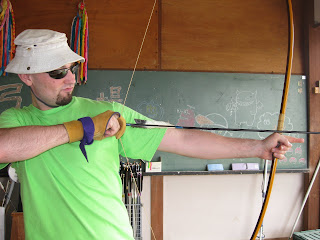 complete with outfits and dance. Saturday morning was when the festival really started; it was open to the public Saturday and Sunday. There were many displays, many food stands, lots of games and fun to be had. The stage this year was a big Buddha, and the big paper mache mascot was Obama, with a “Yes We Can” slogan underneath. Talk about a super star, everyone loves that guy :) Good on him. The gate was a mixture of Picasso and illusionary art.

I ate all kinds of foods again, although I was a little sad the kids were just re-selling takoyaki (fried octopus balls) instead of cooking them fresh. Of course it was still good. I had yakisoba (fried noodles), cotton candy, chocolate covered bananas, popcorn, traditional Japanese green tea, BBQ corn on the cob, shaved ice, hot dogs, ice cream, and my favourite: a big bowl of Okinawa noodles.

The kids set up this one in a classroom, fashioned like a restaurant. For $3.50, you got a big hot bowl of tasty noodles and a large slab of ultra tender pork. When I say tender, I mean you could chew the tendons with your tongue. It was so good I can’t even tell you. I wanted to buy it again Sunday, but they sold so much it was all out by noon. That was unfortunate, but I guess I spent and ate enough as it was. Some kids also had some KFC and Mosburgers (Japan’s McDonalds), and as cute as they were trying to get me to buy some, I was just too full. (Take it with you and eat it later!) haha I love these kids.

I played games and won prizes, I saw displays, I dressed up in a traditional outfit and got my picture taken (I posted it Monday). Juliet, the German exchange student, wore a traditional German dress. I did Japanese archery, I saw many displays, I got spooked in the haunted house, I saw a magic show, I bought new things for my house, I took numerous pictures with my kids, I went inside a rocket ship turned planetarium, I watched band performances. I had scores of good talks with good people and had a fabulous weekend of fun with my kids.

The cherry on top of course was the huge fire and dance at the end. The archery club shot flaming arrows into the crafts they made for the festival and let it alight. I didn’t get into the dance this year, but I did something I regretted I never did last year; I joined in on the mud fight.

I couldn’t do it last year because of a horrible sunburn, and good thing too! There’s quite a bit of rocks out there. I put on clothes that would be easy to wash and joined the kids. Most kids would just pick mud up and throw it in your direction, but some boys 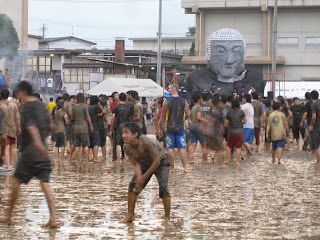 wanted more. The first time I fended off their attack there were 3 of them. I would throw them to the mud and be alright. They regrouped, found friends, then the next time they came at me there were 6 maybe. This time it was a lot harder, throwing them into the mud before they could best me and I somehow made it out alright.

The next wave though, I tell ya, there was atleast 10 boys, and they circled me like hungry hyenas. I threw 3 or 4 down, but there simply were too many, not to mention they just simply got up again. When I finally went down, there was a great cheer and they all washed my smooth head in the mud; I had to dig a bunch of rocks out of my ear haha. It was so fun. I later did some sumo with one of the teachers and while he did knock me down first, I did flip him quite impressively I must say. It was maybe my first time doing sumo. When I realized he was being serious about it, it was too late for me; he was underneath my stomach and therefore had the center of gravity advantage. Haha it was still good times

I was so tired after that I didn’t do much. Some kids got cold and went to the fire to stay warm, others washed up. Others would sneak behind me to trip me and coat me with a fresh layer of mud.

After a quick wash at a large 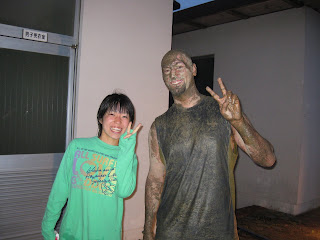 drinking water area, we listening to closing statements, saw some fireworks, listened to all the girls crying, and went home. I was exhausted, and totally forgot the teachers were gathering for a BBQ party after. I heard about it Monday, it really sucks I missed out. It was good to shower though after all that mud. Speaking of which, it’s about time to go home and have a hot shower to try and escape from this heat.

"Do we need more time? Or do we need to be more disciplined with the time we have?" -Kerry Johnson