I'm tired and not much happened so this will be short! :D I also didn't have time to write this up at work, so I'm watching the clock, achin' to shower and go to bed at the moment. Also, I finally posted the photos from Kyoto: Enjoy!

So... last week. Wednesday was kinda cool, there were these Japanese raccoon 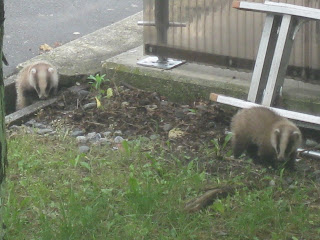 s that visited our school for the week :) Maybe they're still there! They call them "tanuki" here, and there's like some weird dog like rodent, popular in tales and such. Gamers will note too, that in Super Mario 3 for the NES, a "tanuki" suit was obtainable for Mario. Anyways, there were cute, furry little critters that did a lot of... foraging maybe down by the garbage area.

Uh what else. I remember having a rough time about something; a number of things piled up as they tend to do and I was tempted to drive around for hours reflecting. I instead went to the gym and punished myself for over an hour. I really like the gym now! I used to hate it back home. Also, I gained 5kg in the last week or two. I don't think I look fatter, so maybe it's muscle :) it's about time for it to come back, and for me not to be so soft anymore.

I'm sure other stuff happened during the week, like supper 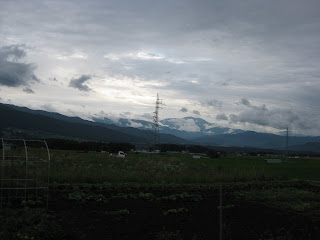 with Junko, Richard, Neal and others like usual. I was suppose to go on a road trip with Neal and Cam, but Neal had a job interview and cancelled. There were other things I could have done, like a huge beach party or a trip to a big city again, but it all drowned in the overwhelming inner scream for silence. I needed a holiday from my holidays.

Friday night I had some BBQ meat with some beers and relaxed. Saturday was to be more of the same, but Junko visited and we watched anime like nerds for a while. Later we went out to the nearby park which was nice, but really empty compared to spring when the cherry blossoms and people were out. Sunday was a lazy day again too. It was so nice sleeping in and being lazy. Neal got me out of the house later though for some food which was ok, getting the fresh air and all.

"We are what we repeatedly do. Excellence, then, is not an act, but a habit." -Aristotle