The search for sagesuru (?) and the shennanigans thereof

Well this is a first. Posting while drunk. Although in retrospect, 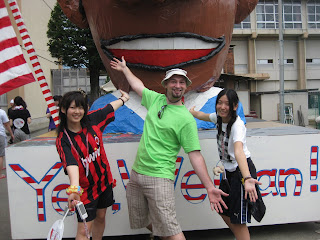 it's a wonder I've never done it before. I guess because I always write when I'm at school and therefore not under influence. Thank goodness for spell checker saving me from looking even more silly. A real, more comprehensive update will be posted tomorrow, instead of tonight's explanation-of-crazy-night 's unfoldings.

Well there I was at school after school festival. ( which I'll post about tomorrow) I was so damn tired during the day I didn't do much. Near lunch I made a big lesson plan using bar-code like things that will be lots of fun yadda yadda yadda

Richard calls me around 6:30 (?). I'm killing zombies. Yea, sure, I can go out for a party with your family/teachers/etc people. Being social is 'hip' now right? So I went out for friendly meat and beers and started off another social evening of fun. Nearby there was a dude at his own party that wanted in on talking to us in English. Before long we welcomed him to our table. Nice chap, talked a bit, but my Japanese was ok enough to fill in the basic gaps when he was too drunk to speak english.

Uh, stuff happened, people left, a girl from the English guide club tried to tell me "go home" because she became my adopted mom which might find me a Japanese girlfriend (but after 2 hard years of ONLY bad experiences, who knows?!?!) and something i forgot what I was typing. So there I was, this new dude I just met, who's almost 50, and me going out on the town.

First, he only wanted to take a taxi. Whatever, not even a 2 minute walk to the places we went and he paid the $10 fee. A couple times. Yes we did 3 separate after parties together. 2 were like lounges I would call them, and one was definitely a snack bar; where girls wearing too much make-up, too much fake accessories, and too much padding in their tiny bras were making small, very awkward conversation with us. He got bored of this and fell asleep (as he did at all 3 places) and we left early. The last place together there was definitely drool dripping down onto his shirt. The first place he literally fell off his chair onto the floor and stayed there for a bit sleeping.

I have the sneaky suspicion he was looking for a brothel; a soap land; somewhere to pay for 'services' but my small town wouldn't have none of that. Maybe that's why he got bored and fell asleep. I think what tipped me off was when he asked the one girl how much she costs.

At the very least, it was a cool look at a different side of 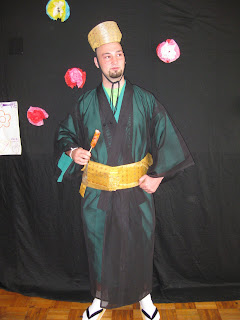 Japan; inside these mythical infamous "snack bars" where you pay WAY too much for mediocre girls to talk to you. He spent like $100 on me at these place! (plus $100 for himself) I hope I wasn't taking advantage of him, he seemed to like it; when he wasn't asleep.

Are people really that lonely? Worse yet, are there even worse abominations who shouldn't be called humans out there that pry on these people? The answer is yes. Even for me last week, I was talking with some cute girl for Russian for 2 months. The person answering the email was real, for sure; but it wasn't the girl I thought I was talking with. My good friend Steve kept saying to be careful, and how it's a scam, and after 2 months, when I called them on it, 'she' stopped responding. Wow, my faith in humanity dropped another couple of notches. On a totally unrelated matter, in the morning I got an email saying one of my game accounts was hacked and hijacked; I fell for a phishing scheme. So if you get a weird email/message from 'me', I'm still changing all my passwords, scanning for viruses, and still doing damage control... I'm just glad I didn't save my credit card number inside.

Ack! I don't' want to leave it on a low note. Again. Hmmm, I sang many songs tonight at karaoke ;) I will drink lots of water tonight to make sure I'm not hung over from the (evil) Japanese Sake. I hope my new friend (who's name I don't remember) got home ok and will email me from the note I left him as I think it was a fun night, and I'm glad I didn't have to pay the obscene prices for what we got. Now it's 1 in the morning and I must wake up in 6.5 hours for work...

"Being poor is a frame of mind." -Mike Todd