That was a late entry I made last week, but it saves me from writing too much on this week. On Thursday after Japanese class I went to Kappa Sushi for no other reason than it had been a while and sushi is really tasty. My stomach shrunk some, but I wish I could go to the gym still. My monthly membership expired a while back and it doesn’t make sense to sign up again until after I’m back from Australia. I’ll be leaving from July 27 to Aug 9, so maybe I can get one more update in before I go.

On Friday I didn’t have the biggest plans, in fact it was a bit tough to even leave the house with the awesome anime I was watching 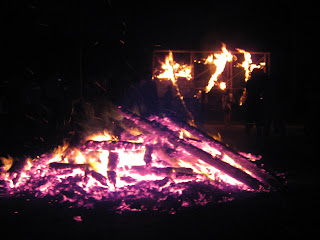 (Desert Punk). I got myself out before the stores closed and finally filled up my fridge with groceries. I got a little desperate that morning for breakfast, so I was ready to open up a can of fruit but couldn’t even find the can opener haha. Ah the life of a bachelor is an interesting one: no one to answer to but myself :)

In retrospect though I bought way too many groceries because I have a trip coming up. I still treated myself to expensive luxuries like plums and watermelon because it has been a while. Later on in the night, my friend called me to play a drinking game over the phone :) Haha it was interesting, I guess she was drinking alone and wanted company. I finally got to play the “two truths, one lie” game, which quickly got difficult and downgraded itself to that other “never have I ever.” Even a quiet night at home alone can’t escape a few drinks.

I was up early Saturday and went to Tatsuno for their festival. It was quite different though, in that Saturday is still not open to the public. So in the morning we set up displays and got ready, then in the afternoon they did various things like a drama, taiko, dance, band and so on. Later on they had a “the best couples” contest.

I didn’t really care or understand, but it was interesting how the bar 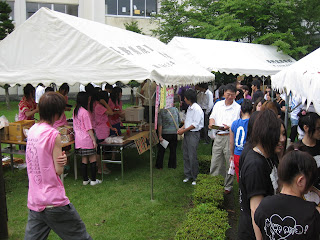 kept getting raised. At first, the couples came out a meter apart and facing away from each other, then they worked up to holding hands, and then once a couple kissed, the bar was raised as far as I cared to stick around for. The reason for this was because every time a couple finished their short interview with a kiss, the crowd screamed. It was clear I couldn’t sleep through this any longer so I left.

Instead of going ½ hour south to go home, I went ½ hour North to Okaya that night, where my Japanese tutor, Kayo had a drinking party. There was a superhero party a couple hours drive away too that I would have liked to attend, but it seemed a bit too daunting for my schedule. So in Okaya we had curry, drinks, met new people that weren’t JETs, and had a great time.

One girl was from Spain and made a Spanish Omelet for us. They are surprisingly easy to make, so I made one for my breakfast yesterday. Basically it’s an omelet with potatoes in it. What makes it tricky, is slow cooking it without burning it, because you can’t really flip it or stir. Mine turned out pretty good though; I loved it <3>

So we were up drinking until 1:30 in the morning or so. Most people went home, but I lived an hour away and couldn’t get there for a needed shower and sleep. Luckily (?) I was wearing festival-appropriate clothes already and went straight back. Now the festival was open to the public, and I had lots of fun doing similar things that I did last weekend.

There are fewer students in Tatsuno, so there was a bit less to do. It didn’t matter to me though. There were many displays and reports hung in the rooms but I didn’t understand. After I saw most of what I wanted, I made my way back to my desk where I fell asleep for almost an hour. :)

Once it was closed to the public around 3 or 4, students cleaned up and prepared for the bonfire and dancing. Tatsuno 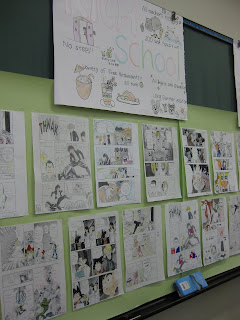 does extra activities and games compared to Yayoi so that was fun. There may have been no mud fight, but since it was raining most of the day there was still plenty of mud to get dirty if you felt inclined. On more than a couple races, students slipped turning the corner and sometimes got covered.

It was quite fun; so many kids were wearing cute cosplay outfits. It may have been a Care Bear, or Santa Claus, a full-on wedding dress, or Pikachu. Many various things, it was great.

They made a big cauldron of soup for everyone, they danced around the fire, and then we watched the fireworks. This time was the best I think, I got to talk with the kids the most and we all had fun.

I was thinking: “I look forward to next year’s festival” and one of those weird epiphanies of “wow I’m in Japan” hit me again. Sometimes it’s too easy to fall into routine and take things for granted. I started thinking of family and friends back home and how crazy this all would have been for me a couple years ago. If I hadn’t signed on for another contract, instead of going to Australia next week I’d probably be moving back home. Before I know it, it’ll be January again and I got to decide what I’m going to do…

For now I’ll delay the tough decisions again and keep having fun. This Australia 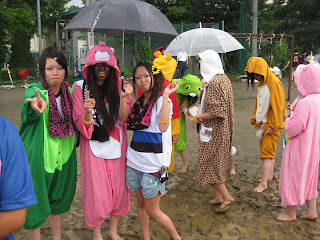 trip will be a good chance to clear the mind and all. (haha can you tell I’ve already checked out?) As I was saying, yesterday was my first day off in 2 weeks so it was quite nice. Cooked a Spanish omelet, played video games, cleaned; all kinds of stuff. I didn’t get to bed until 3:30 in the morning but have no class today so it works out.

"We're so busy watching out for what's just ahead of us that we don't take time to enjoy where we are." -Calvin & Hobbes