TGS07, Disneyland and Akihabara. I need a vacation after a weekend that intense

Well that test I gave my students turned out ok I think, some complained it was tough and the average was 69.5% so in the end I learned a lot and things can only get better. The week wasn't too stressful as I had Monday off and tests were happening so there wasn't much teaching to do. I attempted to back a cake and some potato sauce... but I have a feeling next time will be better too. My oven that I bought is too hot and too fast, not very good for the cake. After trying a combination of things and going so far as flipping it over to cook the raw bottom the middle of my cake was still raw. It was a banana chocolate chip one and it tasted alright, I get gifts all the time at work so I made it for the other teachers. So I brought the cake in to Tatsuno and got many comments like "I have never had a cake made by a man before." Note to self: this is a good way to score big points; just gotta make the cake right next time. The outside rim was pretty good (the part that was cooked).

I should send an email to patty sometime to remind me how to make icing and doughballs. Oh ya and the potato sauce effort was interesting, pretty hard to cook with only one burner. It tasted ok in the end though, only thing was the vinegar here is a little strange from what I'm used to. Washing all the dishes for the week took an hour and a half, half of that time was spent in the da 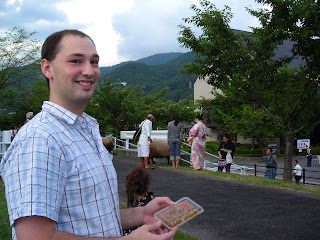 rk as I flipped the breaker having the 1000 watt oven and microwave going at the same time. So ya, I was largely wondering why the neighbor had power while I washed dishes in my tiny basin under a flashlight propped on the fridge nearby. I looked earlier for the fuse box but tried again after about an hour of this. I found it above the shower. Oh and in the picture, yes those are sheep in the background. This was at the 2nd Suwa fireworks event I attended.

So that was the week of school and stuff, sorry if it's scrambled a bit, but now it's time to talk about the weekend! I got up at 4a.m. to catch the 3 hour bus to Tokyo at the bus stop a 1/2 hour walk away. It was a good thing I got a good sleep on the bus or things would be very different right now; more on that later. So I got there at 8 in the morning... and everything is closed! I thought big cities never slept. I was waiting for Neal to show up so we could go to the Tokyo Game Show together so I ended up walking around for a couple hours quite bored wondering what was going on. Most places didn't open until 9:30 or 10 in the morning. Ah well, so we took the train to the game show.

Now Neal (like most people I suppose if you hear about a 'gaming convention') was more than a little skeptical going to this geek fest with me. Once we were inside though he forgot any reservations he had. It was fun. It was crazy. There were things to see and do everywhere. We walk into the place and first thing we see is beautiful ladies. After taking pictures of like the first 5 or so we were like "oh right, we're here for video games." One point I didn't know what was going on, just a bunch of people where hurdled around something taking pictures. I lifted my camera up above the crowd and found out they were taking pictures of a girl dressed up as a video game character (cos play). Only reason I knew that was because I checked the viewer on my camera to see what was going on as I couldn't see anything.

There was so much to see and do. We never really played any demos as there was only 4 hours left to see everything the place had to offer. There were booths for different video games, different companies, museum of old games, gifts shops that had lines that were over an hour long... all kinds of awesome things, my pictures can speak about them better than I can. Just so much to see and do. And the outfits were something else! So many people dressed up and I started to scare Neal after a while "that is Cloud, she is Suzumiya, she is Tifa..." and on and on about who was what and from where. He was giving me strange looks later and at one point I got into a conversation with a gamer about Xenosaga as we were waiting in line together to get pics of the cosplayer Kos Mos from the game. He was like "you guys were speaking English but I couldn't 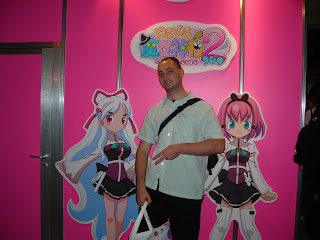 understand a word of what you were saying." haha awesome, I have taken my nerd-om to new heights! Posted is a pic of me at TGS07 between posters of some sort.

So ya, the event was a whirlwind of excitement and I was getting sore legs from all the walking we were doing. We stayed at a hostel for ridiculously cheap, it was great. I didn't have a reservation that night because they were sold out when I called but some room cleared up when I got there. I was kinda hoping to stay in a capsule hotel or something mostly for the experience or for the picture of me in the tiny box, an internet cafe would have been fine too. Hotels in the end are just a place to sleep for the night and maybe clean up, I never the expensive part of that but maybe that's because I'm kinda cheap. Ah well. So we went out for supper and explored for a bit then called it a night.

Sunday comes and we get up early for Tokyo Disneyland! It was about $55 to get in or so for the whole day. We went on maybe 10 rides and it was really exciting. So many people were wearing cute hats and eating good food. It felt pretty crowded as lunch time came but we still got lots done. I even waited in line for almost 2 hours to get on space mountain! Not very often I stand in line that long (the PS3 launch doesn't really count because I could sit down at least). Space mountain was my favorite ride and the Pirates of the Caribbean was maybe the most interesting. One thing about Disneyland you notice is everything gets enormous effort and detail. Nothing looked cheap, nothing was dirty/b 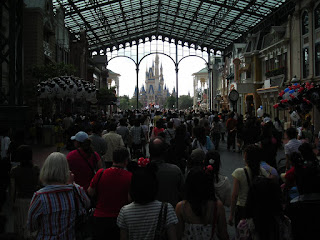 roken/used or out of place.

There were parades throughout the day and at night they had a light parade. It really was something to see. I will post the pictures as soon as I can, just posting 300 or so right now of all the stuff that went on in August. Next time I hope I can go to Disneysea which is nearby and has all kinds of different stuff. After the 14 hours at Disneyland our legs and feet were ready to fall off and we called it a day.

Met interesting people in Tokyo. I ran into a girl from Australia that is also an engineer and she is out traveling a bit. Then we met some Canadians from Toronto that looked lost at the subway and we helped them out. The guy was looking for work but it wasn't coming very easy. It was eerie though, knowing that easily could have been me if JET hadn't worked out. We got contact information and will tell him about opportunities for private teaching that always seems to pop up in my area.

On Monday we hoped to see the fish market that is so famous but it was closed unfortunately for the holiday. Neal showed me Akihabara briefly, the electronics section of Tokyo. I immediately recognized I could spend all day geeking out looking at games and anime stuff so I decided to visit Ginza (means silver in Japanese, very ritzy/classy section) quickly to see the Sony store and such. Unfortunately the playstation branch moved out earlier in the year and was on the other end of town, but it was closed anyways for the holiday.

I went back to Akihabara where I spend the next 3-4 hours alone (Neal went to visit an old student of his to see how he was doing in college and what not) exploring all kinds of stores on my legs that were ready to fall off. One thing I noticed right away is many stores, as soon as you went above the 1st floor the items inside got more and more adult themed. I was so tired that at the end of the day I never did buy anything but I got to see cool things like state of the art arcades and cos-play shops and used video game stores selling super nintendo games and the original famicon (short for family-computer, we know it as the original nintendo) and all kinds of thins. If I was looking for anything, it was maybe posters or something to hang on my walls in my house, the walls are a little bare and I'm still settling in (yes 2 months later) so that's why I haven't really posted many pics yet of my place.

2 months already, still feels like I just got here, especially considering how I just got a cell phone and maybe went on my first major road trip anywhere. So ya my body was breaking down, my thinking wasn't clear so I just went back to the bus station to wait for my ride home. Unfortunately it was raining when I got home so the 1/2 hour walk got alot of my stuff soaked, I think it is ok today, nothing serious. Today was a somewhat relaxed day which was good as I was so tired and still am. I should have went to bed... oh man an hour ago. Oh well, sorry for the brief descriptions in the latest batch of photos, just trying to get them done for now so I can get some rest, tomorrow is going to be a long day. Actually no! The students are writing tests all tomorrow so I won't have much to do, sweet.

"Life's real failure is when you do not realize how close you were to success when you gave up."