Der's a Hurricane a Commin'...

Heh, guess there was something to that odd typhoon warning I heard on Sunday. There will be one that will hit tomorrow http://www.jma.go.jp/en/typh/070924.html they suspect it will hit Tokyo dead on, but Nagano prefecture should be alright, it is one of the safest places in Japan they keep saying. I was reading old JET books that were left at my desk in Yayoi today, and some of them talked about a 7.2 earthquake that hit in 1994 in Kobe. Some chilling stories to be sure, your heart goes out to those people that lose everything and how their world will never be the same, they are giving a new out take on life. They forget the stress of everyday life, everyday expectancies... and are reminded that yes, I am alive. I am here for a reason. Today is a gift and tomorrow is a treasure. Nothing comes easy in this world and possessions are superfluous, so cherish what you have today... Life.

On that note I am kinda excited for the hurricane/typhoon like creation coming this way, I love storms. One thing that bummed me out the last couples years in Sask was it never rained and if it did it was a 10 minute 3 inch dump that just ruined your day. I remember when I was a kid and it would rain softly and steadily all day, and I remember my Aunt Sandy saying those are the perfect days for my Uncle Ken to take a nap on the couch. I was young but I found a lot of meaning in those words and I love the rain now. More than a couple days now we have had a steady stream of cooling showers and I loved each one (got a little cold during the fireworks though). I love the sound of rain on your roof, the freshness of the air, the roads being cleaned, the cooler temperatures they bring to an otherwise scorching day. On that note it has been really hot lately. But enough on that, what I've been up to...

I can't remember if I mentioned, but now that 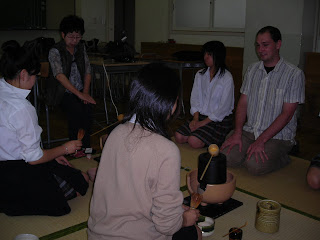 school started I am making an effort to seeing and trying all the different clubs they have here in Japan. (Clubs are sports/activities students pick and spend time every day doing. You don't play more than one sport here) On Thursday last week I attended the formal tea ceremony they have. It is very traditional and very structured. First you eat the snack after you properly folded the paper it came with and then someone serves you tea that has already been filtered to get only the fine powder. Again, very structured and the teacher/volunteer was very strict I was told. You have a special napkin that is folded and cleaned in certain strokes for different wipes (cup, spoon, etc). After receiving the cup there is a special way of bowing, drinking, then observing the bowl when you are done. So you "come for the good food, good tea, and pleasant sights" as I was told. The cup itself you drink out of is a work of art and everyone has a "face" and needs to be turned accordingly. So ya, that was cool and if you are wondering the answer is yes: it is damn hard sitting like that. My legs were asleep and I barely hobbled to my chair after :) One of the tea server's legs were so rough the teacher had to take her arm and lead her back to her shoes (you take a traditional 8 steps or something when you approach)

You already heard about my weekend, after my blog post I went shopping with Kubota from work in Ina. Now something that is very strange about Japan compared to China... is the amount of foreigners you see all the time. To be frank I am kinda shocked. I mean Chris and I were in a capital city of 5 million plus people and can count the number of foreigners we saw there on both hands, maybe 3 hands. I easily saw 2 dozen at one of the shopping centers in Ina, a city of maybe 60,000. So I spent a good $100 I think that day on food and other supplies. I bought a mini oven for $30-$35 or so and a stool for my shower room for $15. My shower only goes up to a little higher than my belly button as showers are traditionally taken sitting down here and let me tell you that stool is one heck of a difference, I really like it. Makes it much easier washing your feet and stuff without worrying about slipping and falling.

Monday rolls around and this day I observed some students in "dance club." They were break dancing, in the school, like 4 meters from the English teachers room. I watched them for a good while and was quite impressed. I kinda wanted to dance too... but after watching them spin on their heads and kicking their feet in all kinds of weird directions while hand standing I couldn't help but feel outclassed. Only thing I did show them was "The Lawnmower" move, but again I just felt kinda petty doing it so didn't do much more. I guess when you practice something everyday for more than 2 hours of course you're going to get good at it. I consider myself something of an alright dancer but I couldn't hold a candle to those guys. I guess they have yet to meet a bar in North America with the sticky floors, broken glass, rude people, girls that walk away from you if you don't like Country music (believe me it has happened more than once) and music so loud you can't even hear yourself screaming. Oh and overcrowded usually. It is hard to do fancy spinning moves on your hands in that situation, maybe I have hope after all ;)

After watching them I headed down to watch their "Soft Tennis" club for a while. Now soft tennis might be just a Japanese sport, as after World War 2 they didn't have much money for balls or anything so they used whatever they could. The ball used for soft tennis is small and rubbery. It was neat to watch but it was getting late at that point so I went home.

Tuesday in Tatsuno (I teach at Yayoi [1 hour commute] Mondays and Wednesdays and Tatsuno [5 minute commute] Tues, Thurs, Fri) I helped out with the Volleyball team. It was the first time I have played in over a year after trying very hard to find a club, any club that would play Volleyball in Regina. Anyways, the high schools I work at have 2 gyms and 1 swimming pool each. I used to think that was alot, especially considering our High school had 1 gym and twice as many students. Wow was I wrong, forgot about the 'club' concept. So the gym was split up into 4 units. Boy/girl basketball on one half, boy/girl volleyball on the other. I am going to assume for now the other gym is split up similarly, using badminton and... maybe another sport. Anyways, I helped out with the boys team peppering and spiking at the 2 setters while the other boys ran drills on their 1/4 of the gym. I was tired after 10 minutes but I think I did alright, they then left for a 1 hour run. I was like "no way" and stayed at the gym. I helped out the girls team for an hour, not really doing much but they were really excited to have me. Then the boys came back and the girls left club for the day. Now the boys volleyball had the 1/2 gym for themselves (basketball did something similar) and then we scrimmaged for 2 hours. So yes, they practiced for 4 hours straight.

Now I am pretty out of shape to begin with, but I held out as long and hard as I could, but I had to give up as I was more of a burden for my team than anything with my heavy breathing and slow movements. I didn't get home until after 8 and went to bed not that long after. Needless to say today was a long day and my body hates me. All the muscles are sore but I'm glad I am getting out and getting active again. 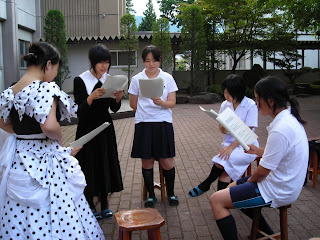 watch the soccer club for a bit but the drama club called me over and asked me to watch. They rehearsed their play a couple times that one of the students wrote and asked me what I thought of it. "Suugoii!!" (amazing!) and then I clapped. Really I only made out a couple words but I loved their enthusiasm. :) They even dressed up for their roles. I was sitting on a stool the whole time so I never thought much about their height but when we all stood up late to bow and say thank you or whatever we did, I realized I was like 2 feet taller than all of them (about a dozen girls). It was kinda weird and made me feel just a little more out of place but oh well.

Tomorrow Yayoi was to have their "sports day." So what those are, is the classes split up and have their own special class t-shirt and play sports against each other. Guys play baseball or soccer I think they said and girls play dodge ball or pingpong. I might be canceled though, Typhoon pending. Anyways I have some stuff I need to get done (cell phone shopping, laundry, etc) hopefully I can get time soon enough to post the 500 pictures or so I took in Japan so far. I might be playing poker tomorrow night not sure, seems kinda short notice for a bit event.

"if you're proactive, you don't have to wait for circumstances or other people to create perspective expanding experiences. You can create your own." Stephen Covey

Is this formal ceremony you speak of what us North Americans refer to as a Marshmallow Roast?

I prefer the hotdog roast myself, but yes it is quite similar. Minus all the school girls, tatami mats, japanese tea and numb legs after from awkward sitting :)