Days off are great, photos are trickling in!

I'm back and getting lots done! As I speak I am uploading photos (finally) for everyone back home. http://s238.photobucket.com/albums/ff93/Aschoenroth/ Enjoy! Sorry for the wait! I am new to this photobucket site too so I am learning as I go along. I couldn't figure out how to add captions or whatever so my captions are now the pictures title. I like the option to make pictures full size if you so desire.

So ya! Thursday! I got a keitai! (cell phone) :) Even the JETs call it a keitai so I was confused the first couple weeks here what they were talking about. It took about 2 hours (they even stayed an hour after closing for me) but I have a phone now and pay about $30 a month. They don't do "test messages" in Japan, they do email. So my cellphone has an email address and it goes on the internet for like cheap. You pay per packet. All this is new to me anyways so sorry if I am boring the tech-elite that may be reading. Like I can check the train schedule on the internet if I need be! I have a lot to figure out yet though, it'll come in time. For now I connect with the outside world a lot easier.

Friday comes around, my students are staying later and later to talk with me and just be friendly. It is a welcome addition, I have been kinda busy lately though, trying to build a test for the students. I have no idea what I'm doing and I already sunk at least 4 hours into this ONE test so far, going so far as drawing my own pictures and making my own dialogues skits (part of the test is oral, they have to listen to me and answer questions) I went to Ina for my welcome work party after work at Tatsuno. I met up with some students that very enthusiastically talked with me whatever they could say. It was pretty cool too because at one point they took out their English workbooks and started reading the first thing they saw: "It was a dark and stormy night... eh?" Haha, it was awesome to see the look on her face when she realized that book wasn't going to help her. That's alright though, with my poor Japanese and our shared interest of Japanese Anime and video games we still had a good conversation. Oh and blood type is important here, apparently I was a good match with one of the girls. "We good match!" she says "Ok" I respond, I should maybe study that blood stuff sometime.

So I get to the party place and it was really fancy. The servers wore 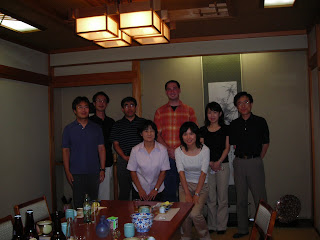 kimonos and opened the doors in that traditional way you see on TV every now and then. (On the knees slide open, go to the other side, on the knees slide it closed) and it was all you could eat/drink for 5000 yen (about $50). The food was fabulous, maybe the weirdest thing though was raw squid mixed with fish eggs (didn't like it very much) and the seaweed in a shot glass. Everything else was great though from the traditional Japanese pudding to the tofu and tuna. Many of the teachers had to work the next day or even later that night so things didn't get that out of hand. I might have mentioned it once already but what happens at enkai (work party) stays at enkai so I wonder if I should even be talking about it. At any rate is was a very enjoyable evening, In the picture are most of the English teachers at Yayoi, Miazawa sensei had to leave early. Currently I only do classes with 3 other teachers. I went home and Jake came over to play some Sega games for a little while.

Saturday comes and it was a really great day, I got so much done. Did dishes, laundry, vacuumed, cut my own hair, fixed my broken bed (been broken since I got here), got groceries, and other odds and ends like getting the oil changed in my car finally. Later on we went to Ina to go to a bar. On the way there we met a lady closing shop for the day. She speaks good English and JETs in the area like to eat there, anyways we said hello quickly. Once she found out where we were going (the gram house or something) she was like "are you sure you want to go tonight? They only have 2 DJs and 13 bands playing tonight." 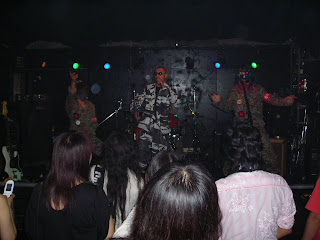 until a bar night turned fun, we usually settled for 1 band and maybe 1 DJ back home. So ya we got there, payed about $15 for cover but we got a towel to go with it so that was kinda nice, if you had a towel you could get in and out of the place freely, there was just a big of a party on the sidewalk as inside (Jake didn't even go inside). Drinks were about $5 but they were pretty generous. This particular club was kinda small but it was still neat. About 6 of us went and crashed at Tonya's for the night.

The next day was kinda strange, apparently invites were given out to a b-day party but (maybe since I'm new) I wasn't on the list and space was limited so I went home alone after a couple awkward moments. I guess that is ok, I got things done again (still no cat) and mostly relaxed, I have a wireless home network setup now and am almost ready to having a care package sent to me (mostly just winter clothes). 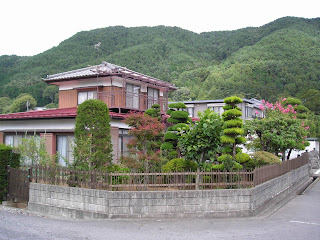 sights and other things. Discovered new stores but most were closed as today is a holiday. Today is "Respect for the aged day" or something where you spend the day either at the grave yard or with your elders. Did more relaxing and... spending hours posting pictures. It is taking quite a bit of time though, might just do the Tokyo pictures tonight and do more later. Enjoy!

Ya and you got a towel too!

Are you going to get a Cat??

Still looking into getting a cat. Thing is it sounds like they want me to sign something saying I'll keep the cat forever before I can adopt it. Not sure what I'm going to do now, still want one though