I'm back and yes 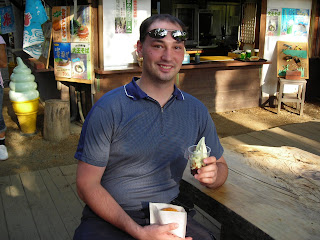 the typhoon was kinda over hyped. I saw crazier storms in Sask every month. It was still kinda neat though, the trains shut down and I skipped out on poker night because I had school the next day. Since the trains weren't moving there weren't any classes to teach so I spent the day preparing my 10 minute Japanese speech. I wrote the speech myself but had a lot of help translating it and fine tuning the grammar. Oh and there is a picture of me eating wasabi ice cream for no particular reason (it was tasty, so was the wasabi beer)

So Friday night we went to a restaurant in town here and I ended up ordering two meals. The first one was tacos (really good for $5) and the second one was a small pizza for the same price. The owner is a fluent English speaker that translates music for Sony and big name artists like Bruce Springsteen. Before paying our tab he got Jake's and My opinion on the lyric translations. Thinking about it after, translating music must be one of the hardest jobs out there: most of the time it is vague or just trying to rhyme. It can have different meanings to different listeners. At any rate he has a nice place and I can definitely see myself going back again, I guess Saturday nights he has open mike night! Should be cool to see local talent.

So Saturday night rolls around, I spent the day driving around and shopping. I got a lot of provisions bought, and figured out some katakana (one of Japan's 4 alphabets) labels so now I have the necessary ingredients to bake those muffins I've been wanting to make! (baking soda, brown sugar, icing sugar, etc) so that was an accomplishment. I spent an hour at a cell phone place waiting for service so I can maybe buy a new phone but they were so busy and then I spent an hour driving around trying to find the only electronics shop near my house (about a 1/2 hour drive away) but all in vain. I went back home so I could go to a party with Jake up north.

The original plan was to go to a bar called "Sonic" in Matsumoto but ended up going to a house party north of there instead. It was still a good time but I found out "being a JET involves driving ridiculous distances just to go to an event." Maybe that is true just for Nagano prefecture, it is pretty big. Also Jake drank like 3 beers in the car on the way there, everything goes in Japan! (it is legal here, I drove) Too bad my car's radio doesn't work though, it would make these trips much better.

So Sunday rolls around and I'm kinda hungover, but I had to give that 10 minute Japanese speech! Heh, boy did I get myself into a pickle. Luckily it was later in the day so I was feeling a little better by then. There were 8 foreigners giving Japanese speeches and they all seemed like they were fluent. Oh and I went last. Intimidating for sure. I somehow fumbled through it with my poor Japanese and constant reading of the script in front of me. I even got a chuckle out of the crowd when I told them how our librarian read me children's books!

The judges deliberated and I got questions from other people while they were out. I think it came clear quite quickly where my Japanese level really was but I tried my hardest to communicate and carried on a 5 minute conversation amazingly enough! It was mostly "here is Regina" on a makeshift map we drew and stuff like that, he was definitely interested in the -40 degree winters we have. So the judges came back, and I got 4th place! I got some coupons for a ramen place nearby and a paper certificate: "This is to ensure that Anthony ScheenRoth participated in the Japanese speech." I didn't have the heart to tell them my name was spelled wrong, it was kind of funny. I helped judge the elementary school kids deliver an English speech next, the winner got a trip to New Zealand, to Tatsuno's sister city, Waitomo. Tatsuno is famous for fireflys and Waitomo is famous for their glowworms. http://en.wikipedia.org/wiki/Tatsuno,_Nagano

After that we went to my first enkai! (work party) 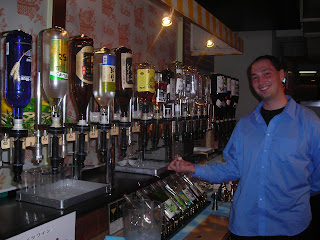 We went to an Italian restaurant in town that I saw a couple times but never really knew if it was open because it was empty usually. I am finding out that it isn't rare at all to see empty restaurants around, especially the mom and pop places. They get most of their business during the day and most stores close by 7 or so. Anyways we had a lot of good Italian food and assorted drinks. The picture is of me from when I was in Nagano and we had the all you can drink (nomihodai) event.

After school Monday I spent over an hour driving aimlessly trying to find that electronics store again, in vain again. I try to find at least one positive thing for every seemingly wasted day, that day I couldn't find much. It was a rather rough day to say the least, trying to find something simple like a store and having consulted a map more than once and still driving around as aimlessly as I had been for as long as I did just didn't sit right with me. I made an extra effort to find the place but it still didn't work out; 1/2 hour each way is a long drive, not to mention when you get lost. By the time I got home it was practically dark and I was driving down a twisty narrow unfamiliar road with many hills and frequent oncoming traffic with their bright lights on. Definetly not fun.

Yesterday I redoubled my efforts yet again to make some progress and somehow a miracle happened! I got stuff done! This is coming from someone who needs his hand held to check his mail and to fill out the most basic of forms. Not only did I find a cell provider but I got lots of useful information from them too! I will be able to go back tomorrow and finally get a cell phone! Then I found the electronic store finally and spent like $80 on stuff I wanted to get for a while now. Like a wireless router, hair clippers, microphone and patch cable. Definetly a night and day comparison, oh and I payed a bill ALL BY MYSELF!! You can take your bills to convenience stores here and they pay your bills for you (you have to give them money of course). But still that is kinda cool, I don't think 7-11 back home would help you pay your power bill. Ah... small victories.

I am having more and more conversations with students all the time and they really help make things worthwhile. Like this morning when I woke up at 6:30 a.m. and it was pouring rain outside. Walking outside in that for 1/2 hour with a broken umbrella going uphill isn't much fun, but those students have a lot of energy and it is easy to feed off of. Like when I walk even near a classroom and they see that I am with their teacher they will shriek with excitement to see me, knowing I will teach them next class. It really is kinda cool, definitely makes you feel good about what you are doing.

One conversation I was having with some students, the girls were saying something about "nagai... nagai..." (long...long) and I am like "what is long?" kinda feeling awkward. Then they were like "your eyelashes are long!" I am like "uh... thanks?" and then she was like "I am jealous." Heh, wasn't the most flattering so I was like "but I'm not a girl!" haha ah well. Oh and I had some of the students from the soccer team try on my shoes. They were amazed how big they were. I suppose I could be some kinda monster if it doesn't require too much effort of course. 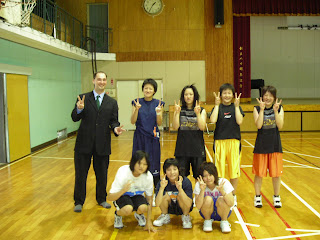 Tokyo Game Show. There is a lot going on in the coming weekends, I am having a welcome enkai (party) on Friday and the next 2 weekends are 3 day weekends with no school Monday. Midterm tests are in 2 weeks (ya the term just started 2 weeks ago) so I am building tests for the students and tomorrow I will get a cellphone! (fingers crossed). I am also looking into getting a kitten to keep me company. I realize it may be a form of masking loneliness but besides that I love kittens and yes it would be nice to have someone/something be home when I go there. I find myself playing more music when I'm at home than normal just so it isn't so quiet. Now that things are getting done, hopefully my list will shrink enough to allow time to post more photos! But until then here is a picture of me with the Girl's Basketball team.

"When defeat comes, accept it as a signal that your plans are not sound. Rebuild those plans and set sail once more toward your coveted goal." Napoleon Hill

A little red in the face in that beer picture Tnoy...haha, nice.

It happens, don't judge me :P

Haha - I really like the story about your long eyelashes!! You must also be the tallest in the city!