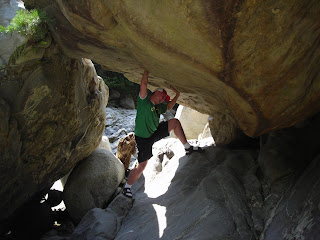 Life is composed of moments in time. Each moment contributing to each other to make a novel; one's own story. Thursday, August 30 added another entry to the new chapter that is Japan in my novel. I got internet at home. (Also, there is a picture of me revealing my secret identity as Hercules while lifting a mountain before swimming in a crystal clear stream from a waterfall further up on Sunday. More on that later.)

I know you are probably thinking "well Thursday was a couple days ago, where are the pictures?" I hope to start posting some today and will make a short entry with a link, things have been extremely busy with classes starting and everything but figured the blog entry would maybe be of higher priority. Now to where I left off last time:

First day of classes at Tatsuno were alright, I am learning new things about teaching every hour it seems and the learning curve is great. I took the advice of composing some questions sheets to better help the students follow along with me talking about myself for the period. I have a simple question sheet of 10 questions asking things like "What language is my last name" and "What are two of my hobbies". With this my self intro which was barely 15 minutes when I first gave it last week now takes an entire class as I can elaborate on stories more and explain other things like how "Germany is the name of the country, German is the language/people". German is a stretch for them to learn as in Japanese and similarly German they refer to it as "Deutschland". After teaching my intro to some classes I am learning how to be a teacher doing other things. Again I'm learning stuff every hour or so like how my voice is rather loud so I need to tone it down for a bit for neighboring classes. (I taught the head, shoulders, knees and toes song, probably to the wrong rhythm though. Ah well.) And then Friday (Aug 31) I taught the advanced class by myself! It was intimidating but as long as there is a lesson plan or something similar I can follow right along. Another big thing I noticed, is I don't get nervous at all when I'm in front of the class. A huge accomplishment for me, especially considering how I was shaking like crazy not that long ago giving a speech. Oh and at Yayoi High School those students went and did the fusion dance for me again in the classroom this time. It was still very cool.

So back to the swimming story, we had a "block party" (Nagano is really big so they split it into 6 blocks to help people feel less isolated) We took the train about 1 hour south but I'm still learning the names of all these places 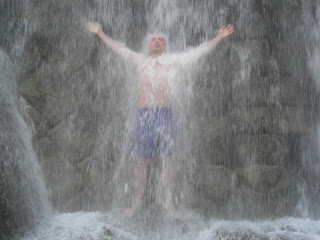 so I can't say exactly where. We went swimming in this amazingly clear stream surrounded by these monstrous rocks and beautiful scenery. We later went on a hike up the stream (really tough considering my camera was in my hand and I didn't want to get it wet) had some close calls with slipping on rocks and the current alone but it was fun. Got to the artificial waterfall and took pictures of us standing underneath, it was really cool. Later that night we had a BBQ and I have a new drink, they call it "Chu-hai". It is like a cooler.... except it tastes much better and after 3 of them I was kinda done for the night. Definitely need that stuff back home. I'll post pics of the party later.

Yesterday we went to Suwa lake again to watch yet another fireworks show, this one had 1/2 the people and was pretty much just as exciting. It was raining slightly so I didn't get much pictures and we all got kinda cold. We started the night sitting on a tarp but as the rain started we fashioned a makeshift tent out of it to stay dry. I invited my co-worker Kubota along and he said all the Japanese people around us were astonished at what we were doing. I then asked how to say "crazy" in Japanese then used my broken Japanese to say "All foreigners are crazy" (Zenbu gaijin nekkyoo desu). We both got a good laugh out of that, I'm such a bad influence.
http://maps.google.com/maps?f=q&hl=en&geocode=&q=suwa,+japan&amp;amp;ie=UTF8≪=36.04785,138.114667&spn=0.00772,0.019999&z=16&om=1
That link goes to Suwa lake. The link might be broken so you might have to copy and paste it. I live 1/2 hour south of there along route 153.

Jake taught me Friday that my burner does in fact have more settings than on and off. Mind you they are so finite it is really hard to get right, but either way it has opened the door to many possibilities of cooking. I had scrambled eggs and hash browns this morning which is a good sign. Going shopping later for more provisions however, such as milk and bread. I'm just glad I can cook stuff again without immediately burning it. When I bought potatoes ($5 for 4 potatoes... yea fruit/veggies are pretty pricey here) earlier this month in my infinite wisdom decided to freeze them... for some reason. They have since been thawed but not until after they leaked their goo over everything and got all rubbery. They still weren't that bad when I cooked them up though, I'll just have to eat them kinda fast. One story I forgot to tell, on Aug 15 the air raid siren ran through the whole town at lunch for an hour. It was to commemorate the end of World War 2. Also this morning kinda early another air raid siren went off and a voice started talking. The only words I really made out were Tatsuno and Typhoon. Definetly got me a little nervous but the weather is fine now, plus I wouldn't mind sitting through a monster storm like that, it'll probably be cool and maybe even give me a day off work ;) It is kinda neat how they can give the whole city announcements through mega phones, it wouldn't be a bad idea for back home but you know everyone would be complaining about the noise or something. Ah well, time to get some more stuff done while I have the day off so I can hopefully get time to start posting pictures. I spent about 2 hours yesterday cleaning my house and other odd chores like that.

"Belief in yourself, belief in your abilities, will override fear almost every time. The only thing we are afraid of is what we are capable of accomplishing." -Rich DiGirolamo

Sweet waterfall pic man. Good to see you got the internet at home.

Ya I have more too, all I need now is more time to post. I might be playing poker tomorrow night, not sure. If so Friday will be a rough day ;)

Potatoes in the freezer? Haha! You are too funny Tony! I am literally laughing so hard my tummy hurts over here in Victoria! lol