I'm not really in the best of moods, a certain thing went down at work that I wasn't happy about that escalated and became way more complicated and painful that I ever would have imagined. But I don't really want to get into that; you don't want to hear it and I don't want to re-live it. Let's just say asking to use 5 days of my 20 holidays in the contract 2 months in advance was alot harder than I imagined. I'm posting because it's been a while and my memory is poor so good to get it down while it is a little fresh. Even then I rely on pictures I have taken to boost it.

So anyways! Last week was alright, students fantastic again. I gave a test out and after marking them today I still have a long ways to go to making good tests, let's just say the average was below 60. I hope the students don't start hating me, I'm making extra effort now to try and connect with them. It was suggested to me from another JET to invite them to eat lunch with me so they can practice their English during lunch break. It is clear, like he said, that people are very shy here. You really need to reach out to get a response.

One of the students suggest I join an upcoming marathon! Well I must be crazy because I'm all signed up now. Thursday after school I visited the soccer club. (they love me since I taught them Marco Polo, they still yell it at me in the hallways) I did this because I'm going to need to get into shape, and fast. I say that now but of course I haven't done anything slightly aerobic since Sunday or so, nor have I really sat down to study the Japanese I want to study, but for now let's blame it on the drama at work... but I digress...

Soccer practice was alot of fun. I don't think I did too bad and my neighbor is the soccer coach. Just today I saw him whittling wood blocks. I was curious so he told me he is making toy blocks for his new born son. I thought that was really cool, he was doing a good job too. I see his wife often when I walk to work, taking care of the new baby. He is starting to walk I think, really cute kid. But anyways back to Thursday, practice was fun! I was horribly out of shape of course and the students had lots of fun trying to communicate with me about drill instructions or anything really. They get a kick out of me speaking Japanese too. Sure I can't say alot but I think they appreciate the effort. They were still doing the Marco Polo with me during practice, and after my foot was sore as I'm not used to kicking a hard ball with the side of it for as long as I was. 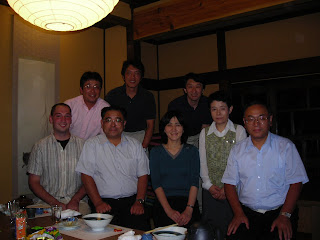 I left a little early to get ready for my other enkai (work party) this time for Tatsuno. It was another enjoyable evening, only 2 people drinking though which I found strange again. They tell me they wish they could drink though but that will have to wait for another party around Christmas or so. I ate strange things again, from cooked grasshoppers to... bee larva.

Yes, bee larva. It was strange, but not that bad I guess. I could only eat a little, too many conflicting mental images of them moving in that small cup. (don't worry they were cooked) The best part of the meal was a small container that cooked in front of you. It has vegetables and meat and stuff inside, really good stuff. I got compliments from my Kyoto sensei (vice principal) about how clean my house is... and how my predecessor always had it messy. I found it strange he lets himself into my house in the first place but I guess I can kinda see it, being something of a landlord and all. I like to run a clean ship, usually things are a little easier to find and it's nice to be able to throw a shirt on the floor and not have to worry about something weird being stuck to it when you pick it up again later. Like those slugs I keep finding around my house (shudder). I found one on my potato chips I think I mentioned earlier, 2 in the shower already while I'm bathing and another one today on the side of my wash basin. Man they get big, and creepy.

I keep forgetting to talk about garbage! Things are much different in Japan! A can of Pringle chips, for example, goes into 4 different garbage containers. The plastic lid goes into plastic recycling, the freshness seal goes into a "burnable" garbage bag, the paper cylinder goes into paper recycling and the metal bottom goes into metal recycling. There are 3 main types of bags: Plastic recycling, burnable garbage and non-burnable garbage. You get coupons from city hall (like quotas so you don't make too much garbage). These coupons allow you to buy these expensive specially marked and color coded bags at a grocery store of wherever. Garbage collection happens on specific days at specific locations in the city for a very specific period of time (6a.m.-8a.m.). Alot of things, like getting rid of your pop cans, only get collected once a month. So if you miss that 2 hour window that stuff piles up! It took me over a month to take out my burnable garbage mostly because it took a while to fill up the bag and I didn't know where to put it. 1/2 the bag turned to a green/brown water in that period... and oh boy it smelt something fierce. Luckily they collect burnable twice a week but again it takes a while to fill up when most of your garbage goes into other recyclable bags.

So Friday comes and I have the day off! The reason for that is because in 2 or 3 weeks time I will work a Saturday for reasons I'm still not sure about. But because I'm working that Saturday I get a day off and everyone got that Friday. I largely had a lazy weekend which was great so not too many crazy stories. Friday night we went to a fellow JET's house who served us lasagna. It was very good and then Saturday night we went to a rave at that Gram House again that I talked about earlier. That was easily one of the best nights of my life, I dance for hours on end. You had room to move, they had incredible music and incredible lights. I rolled my ankle twice while dancing because near the stage there is a little drop that is hard to see. I kept dancing though after the swelling went down, just tied my shoelaces and prayed for the shoe's ankle support. One of those times when I was recovering I asked for some water at the bar. They gave me a bottle of water for free! I couldn't believe it! If I was shocked about that, later at 3 in the morning when the music stopped they gave free coffee and snacks to everyone!

I was shocked. Back home they turn the lights on and the bouncers kick you outside to wait in the cold for a ride; they don't care. Here they came and talked with you, gave you coffee and snacks, I even got a picture with the DJ! I'm a little self conscience about posting it however, I'm sweating like mad in it because I was dancing so hard. I chatted with a bunch of people and it was great. Again for the $15 entry fee you got a towel, and this time they gave us a CD of music too. Oh and one free drink I think. Pretty good deal, I plan on going there again.

Walking from the club I found a stray cat at the station. I stopped for a bit and it crawled on my lap and started purring. I stayed and pet it for a while as it was raining out and I was somewhat waiting for it to clear. (if it's raining, usually it's a long slow affair as I maybe mentioned earlier) I could tell the cat would shed alot but regardless I was pretty close to adopting it. Eventually I decided against it but I was pretty close, someday I hope to get a cat. 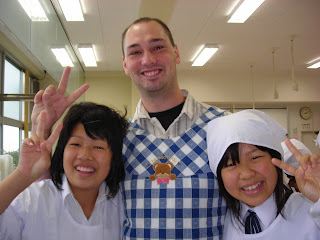 class to her students. We made some sweets and it was alot of fun. The students were pretty giddy especially around Noboru who is something of a rock star. (kinda literally too, he plays guitar I found out) The food was good and it was a fun time. We walked around the school and saw other displays the students put up. I think my schools did their school festivals already unless if that's the Saturday approaching where I have to work. Either way I'm looking forward to seeing my students throw together something like this.

So today comes along and there are students from a New Zealand high school doing a home stay with some of my students. I went with them to a calligraphy class and made some calligraphy. It was interesting as we were very much on display. They would watch and when I finished about 6 or 8 students that were standing around watching would start clapping their hands. Most of the kangi I know involve meat (pork, beef, fish etc) so they found it amusing but I guess it is strange when you think about it. I also did the 4 directions too though, not that I can say them in Japanese yet. We later had a welcome party for them where we played games and had snacks, it was fun.

The last 3 days it has got noticeably colder. Sunday it rained all day and I was shivering pretty hard when I went to bed. Something of a bad omen for days to come it looks like, I hope it won't be too bad but I know snow will be coming eventually. I'll have to form some makeshift insulation around my room and get an electric carpet among other things to keep warm. Keeping my laptop in my lap helped yesterday a fair amount, so did that hot shower later too I guess. But at any rate I should get to bed and hope for sunnier days in more ways than one. Staying positive is important.

"When a defining moment comes along, you can do one of two things. Define the moment, or let the moment define you." -Tin Cup

(Having said that quote I wonder if I should put up a stink about this vacation mess...)
Tnoy
Posted by Tnoy at 4:47 AM