Kyoto, Nara, and Giving Thanks

I’m a bit embarrassed I didn’t update at all last week, but I guess that can be explained within. It started off as a 3-day weekend. The fall colours were starting to peak in Kyoto, and I promised Noriko a long time ago I’d come see them with her. The bus trip down took around 5 hours.

She had to work that day, so I could walk around and do whatever. I got surprisingly 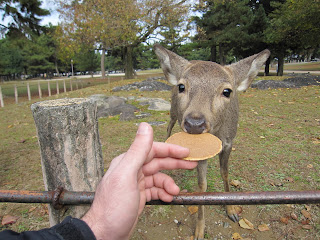 lost trying to figure out where I was, mostly because the bus stop is so far south from the “city center” that after around 5 different maps I poured over I still couldn’t figure out where I was. A cool story though; after I got off the highway I asked at a gas center how to find the train station. A dude there just drove me. I was pleasantly surprised, that was awfully nice.

Kyoto is a city in high demand to say the least, but I wasn’t in much of an exploration mood so I ate some food and relaxed at the station while people watching. It seemed fairly crowded, but I guess when I saw the tourist office’s signs I shouldn’t have been surprised; all hotels in the city were booked up. Personally I think that’s pretty impressive.

When Noriko was done work, we went out for supper together; eating exalted kansai okonomiyaki (a little like Japanese pancakes using meat and other fun stuff. Super tasty.) Earlier I had famous takoyaki (octopus balls) and was quite surprised seeing a white foreigner inside cooking the balls, maybe a first for me in Japan. I think it would be a cool job; those things are my favourite food here! Imagine having that at your fingertips all day… drool…

After supper we watched a movie, and since it was the last show of night (around 9 o’clock) it was practically half price. That made it still $12 but hey, and movies are fun right? We made our way back to her place after, where I visited with her family until past 1 in the morning. It’s a really nice place, and they were so hospitable! I’m so happy to get a nice Japanese experience like that, as I didn’t really have a home-stay family like many of the teachers I know here.

I didn’t want to see anything in particular in Kyoto, so we decided to see something new that was nearby: we had Kobe which is maybe famous for something, 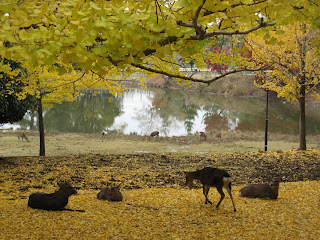 and there was also Nara; Japan’s first true capital city before Kyoto. It’s famous for that and its deer that it lets free roam the many beautiful parks full of colour and life. We spent a good part of the day walking around seeing the different deer, feeding them, and visiting temples. Not to mention some of the amazing photos I was able to take; what a wonderful trip. (pictured: maybe the best photo I've ever taken)

One temple had a huge Buddha, and in one of the pillars is a small hole that you crawl through for good luck. I would never fit, but there were many kids having fun, and some girls trying their best to pop out the other end. I bought a “knowledge” temple charm for Noriko, and she got me a “pass the test” charm as my big test is next week already… December 6th. Le Panic.

After, Neal gave me a recommendation for a Kobe steak restaurant. This is supposedly 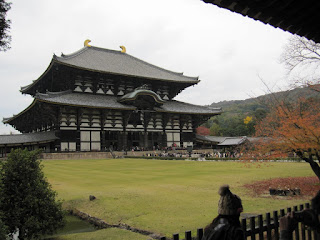 the most famous beef in the world, so I should try it right? The dude there though had a thing or two to say about this fabled meat though; mostly how they import their beef and then give it the name, as if you go to that metropolis you won’t see cattle anywhere. Nah, the stuff he had for me was much better than Kobe steak, and it came from Kyushu; the southern island. (pictured: maybe the biggest temple I've seen yet; look how small the people are!)

It was interesting when he pulled out his collection of money from around the world. I recognized some of the bills, but many of them were a big mystery, along with the languages they were written in. The ones I did know, like from Canada, would all attest to the fact that yes, this is the best steak in the world. I knew I was in for a treat, even if it hurt the wallet dearly; a 150gram steak was $70, a 200g=$90, 250=$110 and so on up to 400g I think. I sprung for the 200g one, while Noriko got an expensive Japanese style hamburger that was amazing.

When that steak came to me, I didn’t know what to expect, and I’m no steak connoisseur, so forgive me if I can’t find the words to give that piece of heaven justice. Each piece that you put in your mouth was rich and full of flavour, while so tender you could almost chew it with your tongue; a method I recommend. I cut many small pieces so that I could savor it more. It was so, so good. While an expensive treat, it’s good enough to try again another time. This is coming from someone that doesn’t necessarily like steaks normally.

The dude was really nice too, giving me free alcohol that ‘complimented’ 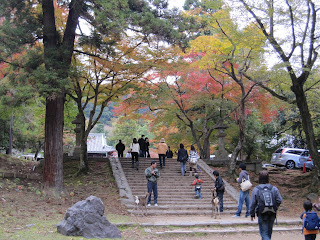 the beef as well. It was some Japanese sho-chu, and it was powerful stuff. Even after I was done eating he kept pouring me glasses, but I didn’t want to be drunk when I met up with Noriko’s folks again later. We watched another movie that night, and after the movie I felt perfectly fine, except I would have odd, sporadic moments of being really dizzy. I was worried at first, but it must have been that crazy alcohol.

Although I had a 3-day weekend, Noriko only had that Sunday that we spent in Nara. In the morning after another amazing Japanese breakfast from her family, I needed to get going, as the afternoon bus was sold out weeks in advance; it’s good I bought tickets so early to come down.

Getting home took about 4 hours this time, and surprisingly I spent most of it asleep again, as much as I would have liked to study instead. When I got home I think I was productive but I hardly remember. I was busy all day Tuesday so I couldn’t write this blog, and for Wednesday and Thursday, that was the big annual “Mid Year Conference” meeting that is mandatory for us on the JET program. It of course was a big waste of time again, but it was nice seeing some people and catching up with them again.

At night we tried to have as much fun as we could before the fun police came around telling us to go to bed at 10:30 again. Of course it was insulting and terrible, but at least it wasn’t as bad as last year. Maybe the only good thing I can say about this whole thing.

Then it was Friday, and I took it easy at home. I took it so easy, that I played video games until 4 in the morning. That was fun, and Saturday I spent over 3 hours on the phone talking with people back home that I haven’t talked to in many months, so that was nice. I hurried and bought some groceries to make cakes, as today was my last class with one of my 3rd year classes already, so we had a bit of a Christmas Party.

I needed it early too because a huge thanksgiving party had been arranged. I don’t think I’ll ever say no to roast turkey, stuffing and gravy, and my contribution to it all was some Marshmallow Cheese Cake recipe that I found on the Internet. I put it together with some help from Neal, Michelle and Shima, and it turned out nothing less than amazing. I was particularly pleased with the design we put on it; raspberry and blueberry sauce very easily mixed in; it looked so beautiful! 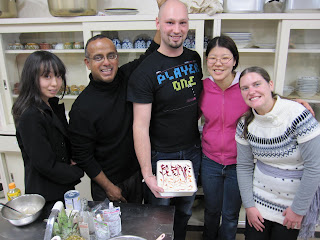 myself in a way I haven’t done since I was in Canada last maybe, as I knew I had to stop more from the physical pain of my stomach pushing against my ribs. To top it off, we had something of a silent auction too. I got some teams together to bid on things like a South African meal by Neal and Carin, but we lost out when another team bid $180. Then during a live auction, Neal and I bid up to $140 to go on a fishing trip; again we lost out.

We did however win a fabulous southern meal by Ike. He is our local superstar chef, and we got it at the great price of $10 each; Neal, Richard and I. I look forward to that quite a bit :) That night we went to Gram house, my first time in over a year, and had a great time with drinks that were too strong, and relaxing music that was still nice to dance to.

On Sunday I studied for 2 hours with Richard and Kayo, then we went out for an Indian Curry buffet for $10. What a steal! I have been there before during my first year; I’m just kicking myself I don’t go more to that wonderful little place. My test is next Sunday, and the panic is setting in. Tonight alone I studied a number of hours, and I wrote a practice test. Just the first part anyways, the “vocabulary/writing” part… and I got 75%!!!! I might be ok………… I’m holding my breath, and I’ll try my damnest this week...

"Success is the sum of small efforts - repeated day in and day out." -Robert Collier