I did something for the first time: I shaved off my eyebrows. I did this of course, to top of my awesome Halloween outfit. How I looked though without any hair other than eyelashes was maybe even scarier than my costume. It had some serial killer appeal to it, and today while they are still growing back, I’m getting interesting comments haha.

I borrowed a dark curtain from one school, managed to find some crappy make-up “pen” at a store, and I wore a black dress shirt backwards to complement and already 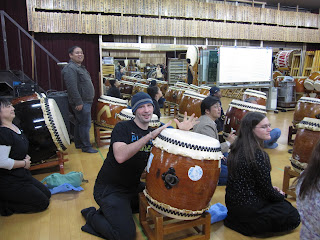 all-black outfit. It think it was a good success. I first dressed up on Thursday for Tatsuno, but my career of actively trying to scare kids was short lived. At lunch I made a little growl and a quick step towards a couple girls. They collapsed, and the fear in their eyes disturbed me a bit. Her eyes dilated behind the tears while her legs were weakly slowly kicking her further back into the wall while she just didn’t know what to do with her arms. 5 minutes later she was still on the floor.

I felt so bad, so I didn’t really do “bad” things like that after. I gave her candy and apologized. My exploits were more limited after that; like busting open the classroom door and growling as I hurried in. Or my favourite at Yayoi the next day: knocking on a window and starting at a student while she was in her locker. She saw me, and then took off screaming down the hallway to get her friend. I was in class and started laughing; the kids liked it too.

Since I was passively scaring people, later I stood around the corner in the English room, so once you entered the room you got a face full of my scary face. I think the ‘warning’ circulated along with the rumor I was giving out candy, as some students would slowly poke their head around the corner, say “trick or treat” and get out just as fast once they secured some loot. My mom is such a sweat heart, she sent me something like 5kg of chocolate from back home that I couldn’t possibly eat, so I let other people indulge in such delights for the first time; like those lovely peanut butter cups.

I was still dressed up Friday for when Dougal, Ashley and Neal came down. They needed a place to stay for the night as they had “debate contest” all weekend in Neal’s old school. We had lovely Chinese food with many of my Wednesday adult students, and after we played “Settlers of Catan”, and I won again, at my place. Awesome game.

I had to get up early though to pick up Richard and Michelle to meet up with Mervin in Okaya. There we got a tour of a recycling plant, learnt how to play taiko (Japanese drums), got a fabulous free meal at a nice restaurant, and learnt safety things including how the defibrillator pads work; you know those little portable ones that are popping up everywhere because CPR is so unreliable for recitation.

It was a great tour; Mervin is an awesome dude. We met many interesting people from a variety of other countries too, which was fun. Now I can say I’ve played real Taiko, and I have an idea how that heart-shockin’ rockin’ lifesaver works. When it was over, we rushed up to Shiojiri and I put on my costume for a 3rd and final time. All morning I kept my toque on really low to hide my lack-of-eyebrows.

Japan loves to be cute, and Halloween was no exception. I guess little kids will be cute in whatever costume they wear. I volunteered 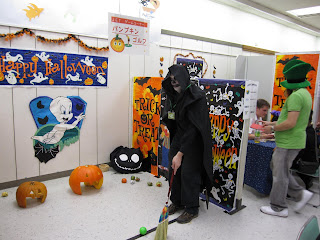 for the games section, as I wasn’t excited to lose my voice in the haunted house screaming for an hour. My game was a little “pumpkin golf” where the kids used a witch’s broom to putt a ball into a Jack-O-Lantern’s mouth. It was great fun.

A number of times kids would see me, kinda pause for a while not knowing what to think, and sometimes take off in the opposite direction. More than a couple kids would refuse to come to my station and play the golf game even though the parents were pushing them on. It was great fun.

Because of the swine flu scare, my costume was hampered a bit when I needed to wear my mask around kids. It got hot and I sweated off some of the make-up but no love lost. Later I enjoyed some festival food, and was even interviewed briefly by a news crew making its rounds. This was my second TV interview in Japan I guess, the other one was during an anime convention over a year ago. I remember when Jake was here; he said the newspaper were writing stuff up about him almost monthly. He’s missed, but doing well teaching English in Africa.

Heh, well that’s funny. I just spent the last half hour in silent reflections. So much has happened here in Japan. So much has changed. So many amazing people came into my life, and then left just as suddenly. It’s weird how I can’t seem to put anything into words about it, yet I have maybe a thousand pages up on this site, and over 10 thousand photos accumulated on my computer.

Well, after the big Halloween party, Richard and I stayed at Jon’s, and then had breakfast with him and Charity in the morning; another two great people I want to spend 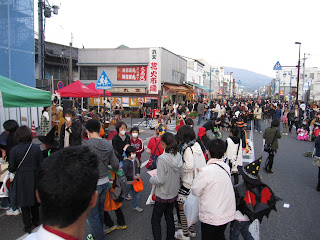 more time with. You just take what you can get with this life some days, and make the most of it. When I got home it was raining heavily, and the other 3 wanted to go home so we didn’t have much of a chat. Earlier Neal mentioned how he would like to come visit Regina with me someday; so depending on my reconstructing decision in February (still ‘no’ at this point; for no reason one way or another of course) it may happen in spring or summer. I too would like to see the new RCMP museum; Neal is in love with the show “Due South”.

More random reflections time; something I’ve been forced to do more often than not. This feeling recently all came about with that goal setting/time management thing I do with my friend Sundays. Lately the first question in the homework assignment was simply “why are you alive?” A valid question I often struggle with, and then put off in the back of my head from time to time. How do we discover our own worth? Or a better question, how do we make ourselves worth of our own time? Reading those over now, it doesn’t make much sense to me anymore. Is the question more important than the answer? Ie in how we think? 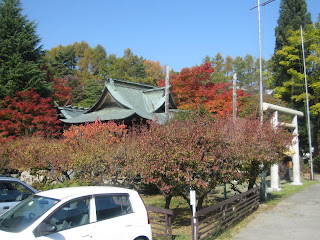 But I’ve been setting goals only for the reason of setting goals and not caring one way or the other. I’m having trouble finding goals or a purpose that excites me; I’ve grown too complacent. For some reason I can’t be happy or satisfied with just staying the status quo, knowing that stagnation breeds discomfort and longing for something different; perhaps the reason I’ve been feeling I need to get out of Japan already.

Is that what our species is about? To constantly search for struggle and conflict in an attempt to define our selves? Is that why all great civilizations are doomed to decadence and decline over time? Why do I quickly stop thinking about my personal problems and insecurities and instead direct them on society as a whole using large, vast, complicated questions that can’t be answered the same way you can solve a math question? I guess even higher level math is not about solving anything anymore, but proving what you’re solving actually exists, and why the logic is sound.

Maybe I should just quit everything and get into philosophy.

"Most folks are about as happy as they make up their minds to be." -Abraham Lincoln