Late again, but it was a long weekend and Tuesday (like Thursday) is always a busy and therefore sometimes unpleasant day at work. I wish I didn’t have to teach 3 classes in a row in the morning, my whole day suffers then; but I digress.

Speaking of Thursday we had a ‘big’ typhoon hit Japan. It was storming a bit when I went to bed, and it rained a bit in the morning when I got up. That was the extent of it, and the aftermath was a really beautiful day. School was cancelled because the trains were shut down, and I “can’t drive” drive to school, yet I was still expected to be at school somehow to sit at my desk and do nothing. Unfortunately it’s a common double standard to foreign teachers; one hotly and openly complained about as it should be.

I had my first class for adults on Wednesday, and they seemed to really enjoy it. It’s exciting to teach to adults that are motivated 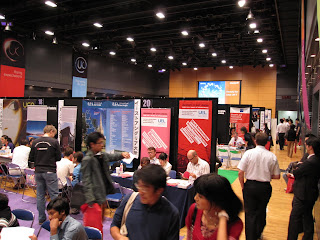 to learn. My one student and friend invited me out for food and drinks Friday with some of their friends, so that was fun as well. It seems I’m meeting new people all the time, but it’s still unfortunate if I tend to forget some that I meet along the way. It’s not so uncommon now when someone will recognize me right away, then I feel like a dumbass for not having a clue. Just one more thing to work on I suppose; I am getting better all the time.

So Friday came, and my friend Mervin invited me to Fuji Q theme park with some cute friends of his, but I caught wind of an open campus in Tokyo. For some reason I don’t have much love for Tokyo anymore; it’s a combination of the prices and rushed atmosphere maybe, I don’t know. It was alright though; I bought a bus ticket in the morning and headed out there. I have been good friends with a girl there for a year now, but oddly enough we haven’t met yet. Because of my short notice that tradition would continue, but I considered myself to be on a hit job; get in and get out.

The day started off great, having played over 3 hours of video games on the bus, but quickly turned sour. I walked around for hours trying to find this place. This might be an area of Tokyo suited for big conferences maybe, as there were literally 7 different sky scrapers with similar names getting me confused where to go. Many times I considered just going home out of frustration, but it was good I found it.

I stayed over 4 hours and had many talks with many representatives. The common theme was they were surprised to find someone like me at a convention in Japan of all places, and as such usually have more information on hand. So I got many emails since being back about programs offered and what not, but the one place that stood out the most for me was Surrey University’s Postgraduate study course on planetary exploration, space robotics, propulsion systems and so on. It blew my mind reading about it; I think it would be super cool to do.

But there’s a cost of course. My one-year doing that would probably cost more than my 5 years of university in Canada. Apparently there are other universities in Europe where tuition is paid for by the government. I’d love to see Europe, and see myself in a “seeing Asia” phase at the moment. Speaking of which I’m looking into options for my Christmas vacation. To go home would be around $1200. The Philippines, $1000, and for some reason Thailand was still a really cheap $600. I don’t know if I should go there again though, I just got back. I got some time to decide though.

Well anyways that was interesting, then after I met up with Fumi and Sakurako from Neal’s and my beach trip a couple weeks back. When asked where I wanted to eat, I stressed a “crazy restaurant” because you always here about them. We went to this place called “Lockup” in Shinjuku, 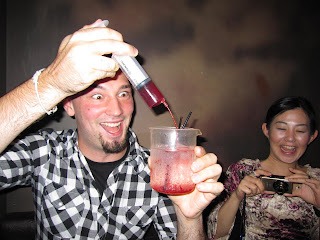 and it was fun! You ate in this small booth build like a jail cell after being escorted by a sexy lady wearing a “naught police” branded hat, and were treated to spectacles every hour like inmates doing a prison break and such. Good times. The drinks were really creative too, as you can see mine with a syringe.

After we went for karaoke until almost 3 in the morning. A perfect thing to do is to drive around Tokyo at night. The traffic is gone and the city feels a lot smaller. Sakurako drove and I don’t think I’ll ever complain about parking again after seeing her bill. She paid almost $50 to park for 5 hours.

On Sunday after regretfully finding out the huge Gundam model in Odaiba had been taken down, I took a bus to Matsumoto to see Neal and others for a big soba festival at the castle. The bus ride was even longer due to the traffic, but I had games again. I got there, saw friends, talked to people, ate soba, then actually had a relaxing night at Neal’s as we watched a movie and slept early after 2 busy nights of drinking each.

It was great catching up with Neal again; it’s a bit tougher now that he’s living further away. He suggested I stay another year. If not, then work in London where the pay is amazing, the holidays are long, and the flights around Europe are cheaper than a bus to Tokyo.

I’m not that motivated by money though, and think people who want “millions and millions” of dollars are shallow. I still remember 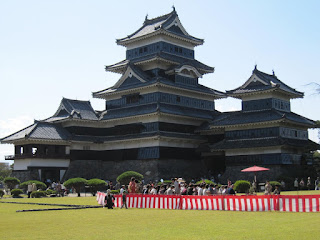 a certain relative of mine that told me how he couldn’t imagine a life trying to scrape by on less than 500 thousand dollars a year minimum. Who’d have thought it would be tough to find something that you want that get you excited; this is why they tell you to hang on to your childhood dreams. I think either most of mine came true, or I gave up on some others, like building an interstellar space ship and exploring the cosmos.

Monday was a good day too, more time spent at the festival trying different foods and beers. I got home around 6. I know this blog seems rushed now, but I’m tired, want it finished and want to go to bed already. I didn’t even proofread it this time, so it’s probably full of errors. Only 6 weeks left until my test. I feel like I haven’t got much done lately and it’s a crappy feeling. Oh and those pics from last week; I'm not actually naked behind that flag, but I'm glad it looks that way. G’night.

“You always here people say ‘I need to’ or ‘I have to’ or ‘I should’, but what you don’t hear them say is ‘I want to’. Make goals that excite you” –Matt