That was a busy week; for some reason I’ve managed to schedule something for all my free days. Monday and Thursday I tutor. Tuesday I get tutored. Every second Wednesday I teach an adult English class, and then it’s the weekend, 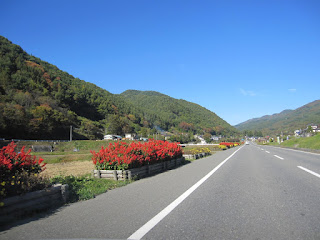 when I went to another English camp. It’s strange to try and make plans to meet with a friend when you’re literally busy every day of the week. Luckily (?) my Thursday class was canceled, and I managed to watch a couple movies among other things. Right now there are over 50 emails sitting in my inbox that I need to get around to answering…

Every night before bed I also study some Japanese, then again when I roll out of bed in the morning. I was actually late for class one day because I was going over some vocabulary… It’s so nice knowing the new grammar and conjugation rules for different types of verbs. Like today I figured out “isoide” worked backwards into its basic dictionary form is “isogu” thanks to the rules. It allows me to properly file it in my brain, and reinforce all the other stuff I’ve learnt prior. Since last week’s list I’ve learnt some new ways to conjugate, using eat as an example again: “Tabetari” (have done things like eaten) “Tabetara” (if you eat) “Tabetayouni” (eat openly/publicly) “Tabenaiyouni” (better to not eat) “Tabeteoku” (eat in advance) “Tabeteshimau” (finished eating)

As a bonus on Thursday it was class match. Usually I get pretty excited about that sort of thing, but I spent the day reading a kids book in the library instead. It took many hours, but I managed to get through the whole thing with some help, and it’s amazing how much reading helps me form and fit new words and thoughts together properly. 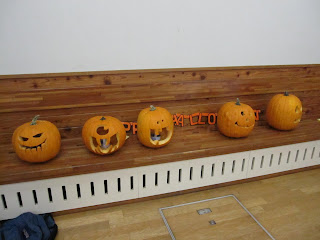 themed English camp. I had some time to eat sushi for lunch and grab drinks/food for the night. It’s strange how not having time after work cuts out even things like shopping; I still need to go and buy my Halloween outfit. One of the first things we did at the camp was carve pumpkins. It’s been so long since I’ve done that last, it was rewardingly nostalgic. I wanted to jump in and do it too, but I wanted the kids to get the most of out it; maybe this was the first time any of them got the chance to make a Jack-o-Lantern.

Later we were put to the task of making a scary story or a commercial. All too often I’m used to the students sitting around without ideas, then stealing whatever suggestion I pop out of my overactive imagination. This time I tried to be as hands-off, but still supportive and motivating as I could. While we ended up needed a lot of time, the creativity and quality the kids put forward was amazing. The product they advertised was an “invisibility potion”, and their first idea, among others acted, was to use it and rob a bank. “We’re rich now, and you can be too! Why don’t you buy it today?” Haha it was so cute.

The judges gave them the first place prize the following day after presentations. We had some extra candy and some extra time, so I taught them to play “99” to practice their numbers and determine who would get the extra loot.

On Friday night we watched “The Nightmare Before Christmas” which I showed my kids at Yayoi a week or so ago. After retiring to our rooms, we had drinks, snacks and great talks for hours. When it got late, we opened up my board game “Settlers of Catan” again, and I claimed my 3rd victory with that game :) That game is so good. After the presentations Sunday, we played a ‘scavenger hunt’ style game, where you had to find the teacher somewhere at the campgrounds and play their game. I was in charge of a Halloween themed pictionary, and we topped the camp off by wrapping a mummy; one student in each group got covered in two rolls of toilet paper :)

Michelle and I were hoping to have a games night that night, but the rest of the group was tired, and I became quite tired myself later so it was a quiet night at home. Sunday was a lazy/quiet day as well, which turned out to be amazing. I did have to leave the house late at night though when I remembered 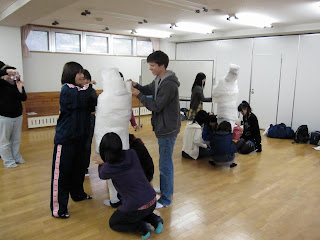 to buy groceries. I wanted to do a cooking class with my 3rd year students and it turned out quite well; we made banana pancakes today.

Since this was my first time doing such a thing, we kept the recipe really easy, and we were still pressed for time to eat and clean in the same 50-minute period. One group of boys maybe didn’t read it too closely because it was all in English, and added salt twice, once was in the absence of sugar. It was hilarious watching them eat from the same plate like hungry animals and complaining how salty it was, while the other groups had their own plates, sat on chairs, had tea, ate gracefully and so on. Regardless it was a great success, and I look forward to doing it again.

Well that’s my week; I had a number of reflections as well. I remember before I left Canada many of the restaurants started to look the same; with their onion soup, chicken wings, pasta, pizza and whatever. I’m starting to feel the same way in Japan with the ramen, sushi, curry-rice, ‘hamburger’ (meat on a plate) and so on. Maybe I’m about ready to move on. October is almost finished already, another 1/3rd of a year gone. 1/3 of a year later I’ll have to decide again to stay a 4th or not. It’s hard to believe that number got so high already. For no particular reason of course, just a gut reaction to move on.

Which is maybe my problem, not setting up something long term and concrete for myself. I know I have millions of choices and options, and perhaps having that available to me makes it hard to pick one thing I’m interested in and want to move towards. I just need to take what I’ve learnt here about having the time of my life and apply it to where ever I may end up; yet another thing to consider. I was thinking maybe Vancouver eventually but I don’t know yet. It would be great to live somewhere in Canada that doesn’t have 5 months of winter a year…

Which brings up my next, very difficult decision. While half reading that kids book, I spent the day Thursday looking for plane tickets to Canada. If I could leave earlier, I could get tickets for $700. I was quite shocked how cheap that was, and I wonder why I paid so much the last time I went. Alas it would be quite hard to leave ½ way through December and I like to save my holidays in case I need it for a bigger trip later. Because of the holidays I managed to secure almost 3 weeks off, from Dec 19 to Jan 11, using only 5 of my 20 days off a year.

Regina is so hard to vacation at for more that a couple weeks, as my sister Patty can attest to. The first week or so is great, 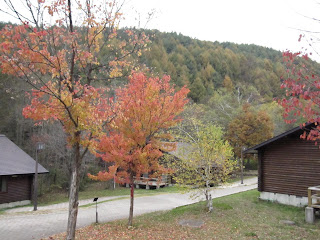 but after that people go to work and other things we keep busy with, and you’re left to watching movies or whatever; trying to keep warm in the sub-zero surroundings. I’m not much of a shopper either. I still wanted to go though, so I looked into other options like maybe spending a week of those 3 in Ontario or something. Alas it was still complicated and expensive, so I just got the (surprisingly cheap and not complicated) $500 tickets to Thailand again.

I could have paid twice that to go to the Philippines, but I’m rather jaded by travel at the moment still. It does take a lot of time, and coincidentally money, and I’ve checked off most of what I want to see and do in Asia; much like my career path I don’t really care where I go and what I do now, and Europe with be its own, separate adventure next. I was talking with my buddy Mervin about my dilemma, and he said just go have fun and relax.

Somehow I made things more complicated than it should be and forgot about the simplest option to me; I don’t always need to have a game plan. I have friends there, doing things is cheap, and I don’t have to deal with winter in any way, shape or form. I still have great memories of that beautiful beach Richard and I stayed on for 3 short days, of which we hardly got to enjoy because of all the running around and being busy.

It’s a shame; I really wanted to be home this year for mom’s roast chicken among other things. The high price, the long/cold winter, and my really long holiday had me thinking otherwise though. I’m glad I at least visited home once this year now. I still need to get some presents together and send them home.

The longer I stay here, the more of the “holiday spirit” I seem to lose. Christmas is not this huge holiday for me anymore; I still remember my first year here when I was working the actual day of; it was depressing. Although KFC’s Colonel Sanders is already dressed up as Santa (it’s not even Halloween yet!) Christmas gets a big pass here like other holidays.

"I would never die for my beliefs because I might be wrong." -Bertrand Russell