My Japanese classes have moved to Tuesday nights and the test is fast approaching. My tutor Kayo laid out a book of the basic grammar that was to be covered, and I stumbled on all the basic, first grammar points; it was my first time seeing them. There are millions of ways to conjugate verbs here; it seems a majority of the grammar is in doing that. Frightened, I found the motivation to study every day since then.

I’m trying to read kids books too, but the problem I’m constantly running into is the odd vocabulary. 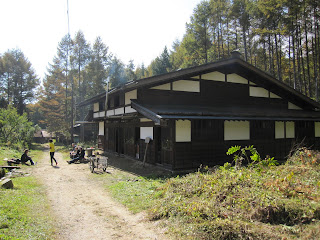 Being a kid’s book, you’d think they would be useful words and stuff, and maybe they are, but it seems to be impossible to find a dictionary that will tell me what it’s saying. This also presents my next big problem: good luck finding a dictionary that will explain the grammar point being tacked onto the end of the verb.

At the risk of boring you, I’ll give a very basic run-down of what I mean with different ways to conjugate “eat” off the top of my head:

There is obviously many more ways to do this, and many different verbs conjugate in different ways, but that’s enough. In retrospect maybe this makes the language easier to speak? Regardless, I need to write an old exam already so I can be assessed and study from there, but here I am writing up my blog at 9 at night after another really busy day…

Studied and worked and did stuff during the week. Friday, for some reason I don’t remember, I got the idea to have a board game party; and I invited people over 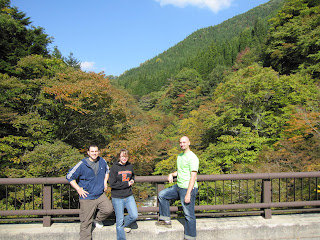 to Mervin’s house in Okaya to play it. There we drank, ate and were merry for many hours, and I finally got to play the game that I’ve owned for over 2 years but haven’t played yet: “Settlers of Catan.” What an amazing game. There were 7 people and only 4 could play because I didn’t get the expansion, but that was ok as we made teams. Richard and I ended up taking the gold home, which was great, and then crashed at Mervin’s as I surprised myself how many cans I emptied.

We got off to a late start Saturday, but Richard and I headed down south to a camping ground in Edo style houses. It was way off in the mountains, and I recognized them right away as the sort of place my mom and I saw when going through an “old house museum” in Tokyo.

It mostly looks like a common house in my opinion, other than being really big, have really cool wooden doors that open all along the outside of the house, a big dirt floor entrance, and a huge pit/area right in the middle to build a fire. Everything was alright, but easily the most flawed thing was ventilation; 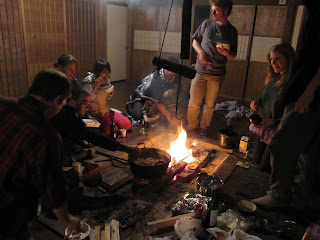 the smoke had nowhere to go. So we had an entire night in a house billowing with smoke; my blankets still stink even after leaving them outside for a day to air out.

Naturally we had doors open just so we could breath, which effectively let out (some) of the smoke and (all) of the heat the house may have had. Ah another adventure of sleeping in my winter coat with my toque on, but oh well. It was a fun night, but after Friday’s binge, I was less than inclined to drink again. It was surprising how hard it was to get into the party mood with all the stuff going on, but oh well.

The house had many charming touches, like an old wooden bathtub, these funny containers that looked like coffins in a room, an old fashioned adjustable hook thing to hold the pot over the fire in the middle, a variety of old stoves and other fun stuff.

If we had shown up on time, we would be able to join the hike, but luckily we missed out because it ended up raining all day. We played more games while we waited in our cabin. It started getting dark and we were worried the group got stranded on the mountain out in the rain somewhere 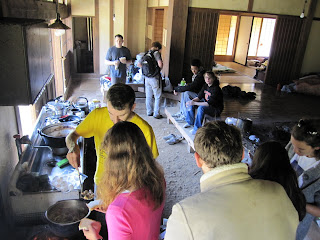 so we went looking for them. They set up camp in the wrong cabin, of which we were later kicked out of regardless of the raging fire and half-cooked stew inside. But ya, another night of eating, drinking and merry making.

Sunday was beautiful, but busy again. Got back, discussed lesson plans with Nakayama; the guy heading the English class I teach Wednesdays now, and various other things as it happens. I really need to get a day planner to start keeping my crazy lifestyle in order. I can always check back thanks to these entries, but what I have planned tomorrow is often cycling in my head to be sure it isn’t forgotten. Hours were spent writing emails again, and now I’ll end so I can get some cleaning done and get some sleep; I’m so bushed. Man I need to study too…

"I hear and I forget, I see and I remember, I do and I understand" -Confucius