Traveling to Thailand a Third Time

I came back from Australia and my Newfie friend Dougal asks, “What are you doing for the September holiday?” That was the first I’d heard of it. I guess it’s new in Japan, and they call it “silver week.” Of course it’s not a week-long 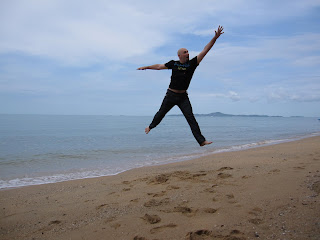 holiday like it and golden week should be, but regardless it’s 3 days off. I only had a month left, and my travel agent was on a holiday himself in Thailand so I couldn’t get him to search. Hokkaido, Hong Kong, and others were in the $1500 price range it seemed.

I looked up Thailand again and it was $700. It was a real Mickey Mouse operation to go though, leaving from Nagoya at noon, 40 minute flight to Tokyo, 5 hour transfer there, then arriving at midnight in Bangkok. Of my 6-day holiday, 2 days would be wasted completely in this horrible transit, but maybe that’s why it was so cheap. Regardless I’d still get 4 days of fun.

I spent most of the holiday with Anna again, and got to meet up with Lily later. One temple that I saw had a sleeping Buddha inside. Nearby he had many pots in a row, where you’re encouraged to take many tiny coins and drop them inside. She’s a sweetheart, but her English does have some limitations at times with complicated explanations for what this was about. Best I could make out; we were giving money to the dead so that they may pay the ferryman to take them across the river Styx to heaven. I thought that was a different religion that did that though?

I think the temple may have had roots with bringing Thai massage and its education to the country, as there were many references and diagrams for it. At times 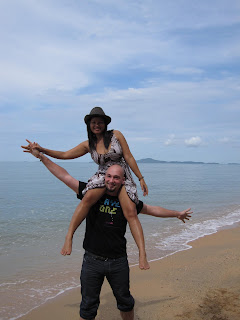 I’m surprised how religious Anna is, but it’s interesting to watch and see how she reacts to things. For example there are many little Buddha statues around Bangkok, and she would often clap her hands together and bow to them. At the grocery store where we bought some delicious dragon fruit, there were flags set up when you can staple a small donation for the temple to, incase you missed worship that day.

There was a small shrine in that big temple where Anna took a flower, and meticulously folded each pedal of it. Later she burnt incense, and shook out sticks to tell her fortune. I don’t know, I was just fascinated by all that; it’s pretty rare to be able to see it in such elegance I think, it’s so foreign to me. If she got a bad fortune, there was a place to go to get holy water to wash it away, but her fortune was so-so, so she was ok. Religion seems to be a product of upbringing, as with many people and cultures. She told me stories of how if she wore a hat near one of the many mini shrines, her mom would give her a smack for disrespecting Buddha and stuff like that. Feet, and the bottom of shoes are also a place of insult and filth.

I was happy to be able to catch a movie this time in Bangkok. The theaters are still awesome as ever; the chairs are big and comfortable, and these ones reclined a bit. You could move up the armrest too if you wanted to get close to your friend too. We ended up seeing “District 9” which may not come to Japan, and I was excited to see on the big screen. I really liked it, but I wish I wouldn’t buy into marketing hype so much as it builds unrealistic expectations, and ultimately disappointment. 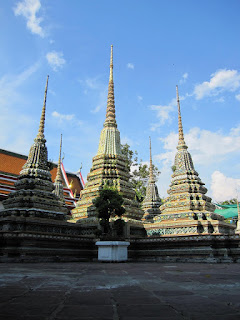 started we had an hour or so for supper, and I saw a pizza hut. It had been a long time, but it was highly worth going. Anna loves her Thai food and its spice, so it was funny watching her eat pizza; I think it’s extremely rare for her. She coated it in a thick layer of extra spices they had on hand that I didn’t recognize, then of course she didn’t like it so much haha. Naturally, I ate too much, but it was so good, and it had been too long. It’s still funny how you can grow to miss things you didn’t care much for in the past. Neal said there is a restaurant in Matsumoto, that lucky guy. I’ll need to visit him more often.

We went to a touristy street as well, where there were all kinds of little neat things to buy. It was hot though and I’m not much of a shopper. I picked up my gifts for the Japanese office quickly and was free for the rest of the trip. It was assorted fruit candies that are hard to describe. On this street we saw various things like a dude getting a tattoo and ice cream to eat out of a cup made of leaves.

Well I felt ripped off last trip because I was sick, so I made a trip down to the famous Pattaya beach. It was a 2-hour bus ride, and it cost about $3. Once there, I found an amazing hotel. I stayed on the 12th floor with an amazing ocean view that cost about $40 a night. I couldn’t help but compare it to those capsule hotels in Tokyo where I pay the same amount.

Alas, the weather was perfect and there were no waves. That didn’t stop me 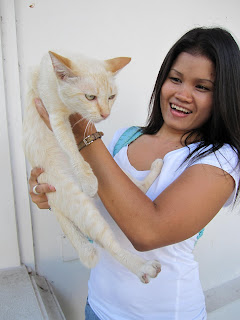 from swimming for a while though. The water was a bit murky, and I struggled to remember how it looked in Vietnam. I just remembered the one in Japan a couple weeks prior to be crystal clear. Also, it was a bit itchy to be in the water for some reason; maybe weird little bugs or something, but who knows. The ocean has all kinds of stuff in it.

Sitting on the beach was a bit annoying at times, as there were walking ‘supermarkets’ coming buying asking you to buy their stuff every minute or two. After a while I ended up just swimming at the hotel’s pool where it was clean and nobody to bug me. It was cool too! You could sit at a bar there and be served drinks in the pool. I love swimming so spent a couple hours there.

There’s not a lot to write about when you’re just relaxing. I talked a lot 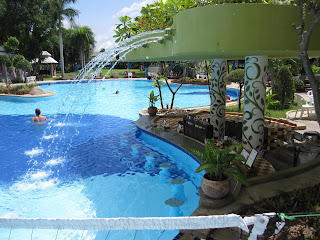 with Anna and we walked along the beach for a while before it got too hot and I needed to jump into the water again. She bought peanuts from a traveling supermarket person, and it was interesting to eat. I’ve never had peanuts like that before; perhaps they had just been harvested as they were a bit soft; still tasty though! Not too salty.

Driving to the hotel, there were all kinds of crazy stores, and going for supper that night we saw the exact same cliental in each place; only middle aged balding dudes. Atleast I didn’t see one of those dudes with an under-aged prostitute as you sometimes hear about. I was looking forward to some BBQ, mostly because I was looking for food I missed that you can’t get in Japan (if the Pizza earlier didn’t give it away) but Anna saved me by buying from the Thai-only menu. It was such spicy, tasty food; I really liked it.

When I met up with Lily again, she was surprised I had a present from Japan for her again. She has been exercising lately at this huge park we strolled. In one of the ponds a huge lizard popped his head up and Anna got really excited. Apparently that’s a really good luck sign or something, but that thing freaked me out.

There sure are a lot of stray animals 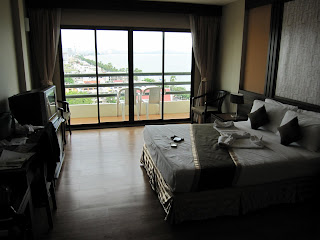 in Thailand; even the beach was full. It’s cool though that Lily carries food around with her for the cats, and Anna was bold enough to go up and pet them, even if the one scratched her and made her bleed. That reminds me of my sister Patty’s brief adventure in Japan.

I finally got to take the subway in Bangkok. I was surprised how clean it was, and how empty it was compared to the crazy streets above. One of the stations was called “Bang Sue”, which I would find a lot funnier if that wasn’t my mom’s name. It reminds me of those crazy names we saw in Vietnam like “hung long.”

A huge storm rolled in on the last night, and I wished for it to cancel my plane; 4 days was just too short. I ate at the huge outdoor arena I talked about during my first trip. It was sheltered so that was ok, but the aisles were flooding from the downpour. I managed to find that tasty German beer again here, and enjoyed it along with a wide variety of tasty foods. I didn’t want to drink too much before my plane though, so I’ll have to get one of those huge funnels/pitchers the next time I go. There was live music and dancing up on stage. I couldn’t understand it of course, but it was still nice.

My plane left at the cruel hour of 5 in the morning, 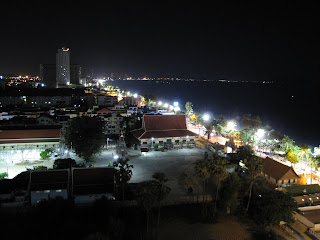 and I got the wake up call at 3. Thus started the long, hard trip back home. I’m always bitter when I finish my holidays; it’s unfortunate. To get from the airport to Ina was $70, then to get from the highway where it dropped me off to my house, a 3-minute drive away, was $20. An hour taxi ride anywhere in Bangkok will maybe be $3. (pictured: view from that amazing hotel room)

Ya not a whole lot to write about. It was a great trip, and a great break from drama that has found me overseas from Canada and in Japan. “Life is too ridiculous to be taken seriously”, why do people get so miserable over things that matter so little. This was my last big holiday until Christmas I think, my Philippine friends are telling me to visit, and my old friend Jake is living in Northern Africa now sending me amazing stories of his time there. There are always options, now to figure which ones to take. Europe?

“Keep your face to the sunshine and you cannot see a shadow.” -Helen Keller