Before continuing with my really late post, (oh well, I posted 4 last week, burnt out, and was really busy all week so far) my sister wrote me something that got me confused, about how I got “scanned for swine flu” coming back to Japan. Perhaps I should explain.

I’ve been in many airports now, and all of them have a “thermal camera”. So every passenger that enters the country walks single file so the camera can detect if your body temperature is above 38 degrees or whatever. If so, you have a fever and will be detained for testing. As far as I know, this seems like a super standard screening everywhere and I’ve seen it on the news, and back when I lived in China 5 years ago so I assumed you knew what I meant. Upon reflection I don’t remember if I’ve seen it at Canadian airports, so maybe this is an Asian thing ever since the SARS scare. The news loves to scare people with unnecessary garbage to distract from more important stuff they should be covering, but I digress.

So ya, last week. Unsatisfied 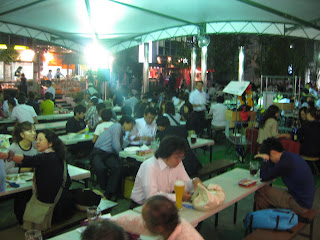 with having had to drive and not drink Saturday, Richard and I threw out our trip to the gym in order to partake in that wonderful summer/beer festival in Matsumoto. Because we wanted to drink we both took the train up, and although I’ve known transportation to be expensive in the past, it was put back into perspective.

Going to Matsumoto and back cost almost $20 and 3 hours. I can almost buy a tank of gas for my little car with that much money, and it would have taken about the same time. Although parking is ridiculously expensive in Matsumoto (I spent $30 when Janelle came), I could just leave my car at Neal’s now.

But, Richard and I wanted to be home that night instead of having to wake up early and go to work that way. Being at the festival definitely made up for the annoyance of getting there. I tried that German beer that won some kinda award last year that Neal taunted me with the smell, and oh my it was wonderful. I’m just sad I couldn’t take any home with me; I’ll definitely need to go to Germany sometime.

I later tried a Pilsner which was great in its own right while Richard had a dark beer second, but I was in love with the first one so my 3rd drink went back to it. Neal made the trip down and we all had a good time sitting out in the busy square, eating homemade German sausage and other treats.

The week came and went, most of it was spent writing blog entries; well over 20 pages. When Friday came I stayed after school (almost the last person out) finishing off that last entry, then rushed home, posted it, then jumped in the car to pick up Neal in Okaya. We were off to the beach!

We talked about it, but never got to do it last Summer just because we were too busy. This weekend was free and we were both busy every weekend after that for months, so we knew if we didn’t go, then we wouldn’t make it out this year. Again. Neal had been to this good beach before, so I assumed he knew how to get there, and Neal assumed since I was driving I had directions and knew how to get there myself.

That first 10 minutes or so in the car was kinda awkward with the “I thought you…” but I didn’t care enough to pursue it further, we were going to the beach! Who wants to argue 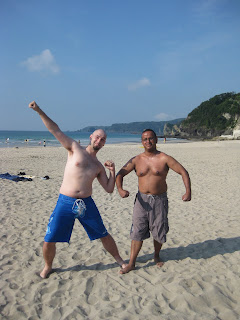 with their friend over something that petty when both parties clearly think they’re right? Besides you can’t get lost in Japan, you’ll just end up in some city. We drove 300 kilometers practically blind and it took over 7 hours and over 8 stops at convenience stores to ask for directions. My spirits were high though, I know crazy circumstances like this lead to great stories and adventures, plus nothing was going to get me down about the beach; I felt so cheated during my Australia/Thai adventure with that bloody flu.

We arrived at 3:30 in the morning so naturally it was dark. The stars were amazing. It had been a while since Neal had been there and the numerous new signs (in 3 different languages no less) warning of legal repercussions should you set up a tent and camp out got us worried enough to sleep in the car until morning. There were other tents out, but we didn’t want to risk it and let them play the pigeon in the mineshaft.

We got up around 7. I woke up briefly a couple times, as it is what happens in a hot car with the sun beaming in, and each time my little car was surrounded by Japanese people watching the strange foreigners sleeping in this little car; me with my big bright red Hello Kitty pillow in my arms. Of course when you looked at them they scattered like cockroaches when you turn on a light, (so I hear, I dread the day should I experience it) but it was still funny. We got up and the beach was crowded already.

What a beautiful place. Neal tells me the majority of beaches in Japan have had its sand removed and replaced with concrete, so this place is really special. Apparently 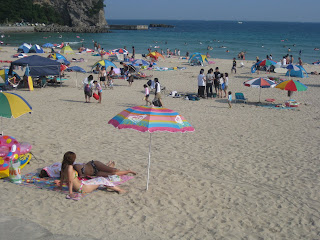 they do that because of the typhoon coming through, but I haven’t really seen it for myself; it sounds crazy anyways. The water was a nice green blue, and when you were in it you could still see your feet perfectly clear on the bottom.

After a short swim to wash away any sins and bad memories of the arduous journey there, we got some breakfast. Neal cracked a beer. I was compelled to do the same. So for breakfast we had some fried rice, some hot dogs, and about a liter of beer each. Great way to start the day eh?

We walked around a little, and it was a bit reminiscent of Vietnam; we walked a lot then too on a road near the beach. Luckily there wasn’t far to go or much to see, so it was easier to jump back into the water. I thought it was fairly crowded there, and too many surfers for the tiny waves they were waiting to catch. There were enough waves to keep it interesting for swimming though.

We had set up the tent, but the wind knocked it over and broke a pole. Neal blamed it on the beer, but we just put pegs in this time and it held up ok after fixing the pole. Neal took a nap, and I really wanted to too; it felt so good. I heard too many horror stories of people falling asleep though and waking up ready to go to the hospital because their burn was so great though.

So I didn’t really sleep. I nodded off a couple times 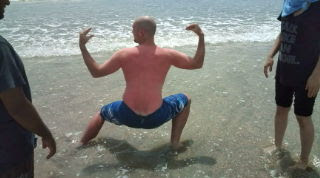 while trying to read a couple pages from a book, but was awakened by my paranoia, and at one point what I thought was a bug crawling down my neck: it turned out to be lots of sweat. (pictured, me doing a lobster pose with my new sunburn)

I inflated a tube and went back in the water while Neal napped. After an hour of this maybe, I went back to my towel and slept on my stomach this time, with my shirt covering my head and the back of my neck. After about an hour I woke up super dehydrated feeling super hot. It was only 1 in the afternoon haha

We ate, drank liters of water, which was luckily free at the out door restaurant where we had amazing food, and walked around the nearby town after. We found a cool restaurant where the lady inside hand made amazing things like the caramel ice cream coffee float we ate, cheese cake and other things.

I think we went for a swim again, but a lot of this weekend is a time trap for my memory. It was a relaxing way to get away from it all. That night we had homemade pizza and Thai curry for supper at the lady’s restaurant, bought Aloe Vera for my screaming sunburns, and tried to go to bed early.

At the start of the trip I was whiter than the white sands we napped on. I put on a lot of sunscreen: spf 50. I put it on often: about a coat an hour it seemed; or every time we went into the water. I finished that day redder than a cooked lobster and probably in just as much pain.

When we tried to sleep that night, many people came to the beach and lit off fireworks in a big circle around our tent. The women wore kimonos and there were many kids. Needless to say we couldn’t sleep so we sat out and watched the stars for a bit until they left.

In the morning while loading the tent in the car, a model named Sakurako came up and started talking to us. This was pretty rare for a Japanese person to do, but we soon found out her and her friend Fumi weren’t average; they were really cool! We talked and had fun for hours, although we had to move under the shade because I could still feel the sun attacking my burn through my clothes.

We needed to swim before we left so we jumped in again for a quick one despite my wounds. There was a typhoon coming, so the wind and waves were much stronger that morning, and the surfers were more annoying, with a large portion of the beach closed off just for them now by the life guards. They were practically shoulder-to-shoulder; crowded so hard so they couldn’t surf anyways. Crazy people. The waves were great though, while waist deep, they’d come crashing in over my head. I’d jump up into them and had a blast.

So fun, I can’t even tell you. There were many more bikinis out this second day too; tiny bikinis. The beach culture is interesting, the girls had tans and some people had small tattoos; something usually taboo because of the Yakuza mafia stereotype. 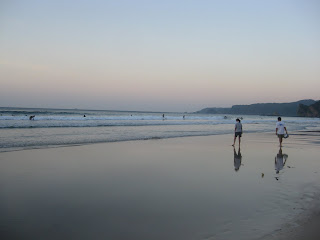 We had to get going around noon though to get back in time. The girls were heartbroken, but the weather was getting worse. Along the way we ate sushi at a famous restaurant; good stuff. The drive back was a lot better, even if we got lost again and had to take a 2 hour detour to get back; it took over 9 hours this time. Got home, slept. Now I finally have done the beach in Japan and seen the wonderful bikinis.

Well, time to get some sleep; I'm climbing Mt. Fuji tomorrow... if I you hear from the morgue then you'll know why.