Dance ‘til you can’t dance no mo’

Well my cell phone still hasn’t shown up, looks like I’ll be buying my 3rd one soon enough; I’m still working on what colour this one should be. On Wednesday after school, I had a half hour to kill or so before I was to meet up with Neal for some festive burgers and whatnot so I mingled with some of the clubs. Yayoi girl’s dance club was waving extra hard at me so I stopped by to watch.

The way they get excited and scream is something 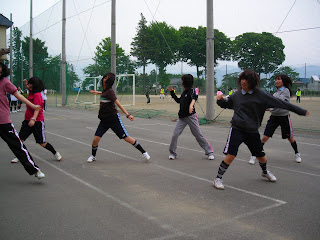 I don’t think I’ll get used to; it’s still awesome each time. Before I knew it they were grabbing music players, disks, talking furiously and getting their dance routine up and ready for me. They were using some kinda mini disk that I hadn’t seen before; you pop it in like a cassette and its the same size as a floppy disk. The kids thought it was strange I had never seen this strange format before.

Anyways, I was treated to, and delighted from, a couple dance routines. One was J-pop while the other was some hip-hop. Either way it was like watching the early stages of a music video; it was choreographed rather intensely. The students were working on it for an apparent school festival that is coming up; I hope to attend and am a bit disappointed there are other school events I have missed out on due to my schedule that are huge splashes (things like class wars; I hope to tell you about them someday when I experience one personally)

Neal and I went for food, and I had 3 main courses again (pasta, burger, and… I think it was a chicken steak or something) before I was full. We went to a nice little family restaurant with good prices and non-stop drink bar; a haven for our students. While there Neal saw his students, I saw my students from 2 different school, and we saw Noboru’s students from ½ hour south; this restaurant isn’t even that big! I just hope they weren’t watching me too closely with all the plates that passed infront of me to be emptied out… The best part of the meal though, was going to those coin machines after to buy toys! I bought at least 3 and was going to get more, but all those students’ eyes were on me getting excited around this toy machine; they chuckled when I said “one more”. ^_^ Either way they’re pretty sweet toys, good bouncy balls with Mario paraphernalia inside. Things like his bee mushroom and ice flower from his latest game.

On Friday I was suppose to have a BBQ party with co-workers. I guess I should have poked them more during the days coming up to it; as on the day of many of them seemed to have forgotten. Uchiyama sensei was gung-ho about it, and so was I to some extent (it was a really weird week; I had no energy for much of anything) but she was out of town on a meeting, saying she would return later for the party. While she was gone, the party ended up being cancelled from lack of people, and I went to volleyball instead for the first time in a couple weeks (I really do want to play more).

Volleyball was fun again; my stamina is still low. They called me in to serve for over an hour straight and my arm 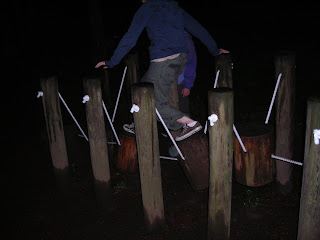 was cold. It still hurts today but that’s alright, so do a lot of other body parts. At 8p.m. that Friday night practice ended and I went home. Waiting for me on my doorstep was a 6-pack of beer and this (paraphrased) note was written onto its case: “I came by and nobody was here. Here is a present” I still feel horrible, I guess no one at the office ended up getting through and telling her.

It rained long and hard again Saturday, making for a really cold day. Our block group in Nagano was to meet up for probably our last block party for an obstacle course, BBQ and other shenanigans. Thanks to not having a cell phone, I miss-communicated with Jake and Neal for a couple hours on when and how I’d be showing up; another thing I feel bad for as Neal was studying for his last test to get his masters in Tokyo in two days while he was waiting at the train station wonder where I was.

When I finally did make it out, we were holed up in a beautiful cabin in this neat park. When Neal and I knocked on the door we heard screams and cries to “lock the door!” Apparently we showed up during the late stages of some strip poker and there were a bunch of drunk giggling people inside. Ah well ^_^ “I feel so much closer to you guys now.” Was heard later.

Later in the night as the rain died down a bit, we went out into the pitch black to do that obstacle course. There were some tense moments of “don’t fall” and some cool structures like one that got you to crawl up, over and down through this tight rope structure deal. One of my favourites was just going over this suspended rope mat like area; something you’d see for a safety net at the circus. While Patricia and Matt struggled with each movement and hole, I used my big feet to up and walk over the whole thing, crushing them entirely. It was fairly comical, having me walking effortlessly by people who would otherwise look like their appendix had burst with all the grunting and little movement. Some of the structures we didn’t understand, like suspended ropes with wood blocks on the bottom. 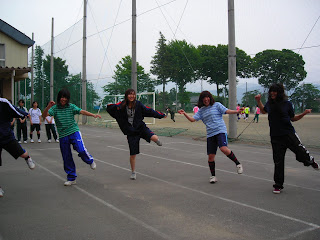 and them take off. Most people in my block are staying though so that’s cool too. I would post a picture of the cabin but one person happens to be flipping the bird in it so I decided against it. Instead, girls bouncing on trampolines! Uh I mean dancing.

"If you think you're too small to have an impact, try going to bed with a mosquito in the room." -Anita Roddick