I wanted to go to China last weekend to visit my good friend Chris, but in the end it would have been too short for the price tag and hassle involved (sorry Chris). Plus I found out recently I probably wouldn’t have gotten in due to needing an entry visa from my embassy or something; something I never looked into at all. A trip for another day I guess.

I’ve been making good use of my new playmate, Barbie. One day she cooked up some fish and hotdogs, the next day some burgers. I invited my neighbor out for some but he declined, stating his current physical shape as the 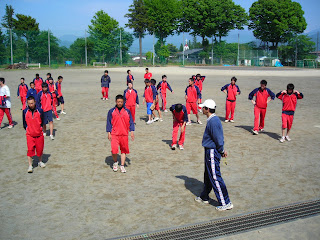 reason. A BBQ is just more fun with more people. The students are writing tests this week so it’s been slow for me; another reason for the China trip but ah well. On Wednesday while I was bumming around with nothing to do, I happened to drop by students playing baseball for gym class. They had a big, soft ball and were just out having fun. I’m not sure if they were even keeping score.

So I sat down at watched them for a bit under the hot sun. I seem to draw attention wherever I go which is alright; as long as I’m not too tired to flash a smile or a wave I figure. On thing lead to another and before I knew it they asked me to bat! I was surprised, but delighted to be able to pick up the bat again. Of course I swung at the first pitch, and unfortunately it smacked into the ground and went out to 3rd base. At first I didn’t even run I was so disappointed; I wanted to bat again and make the ball soar. Soon enough I got the gist that I should be running and reluctantly put down the bat half way to 1st base.

It wasn’t long before I made my way around the bases later, and I did some showboating before I tagged home base. Some students told me I was a good batter, but I knew it was a crappy hit. Either way I couldn’t communicate my disappointment and left it at that, hoping they would call me up again. Class ended before then, but I may stalk the fields a little more often now.

Later in the week when I went home early I ended up baking a cake. I found a banana bread recipe and used my big oven. It took a while to cook unfortunately, so by the time I got to the school most people had left. I gave out cake to people I saw, but still left with a lot of cake in my hand. On my way back home, my neighbor was out doing gardening or whatever so I gave him a piece. He looked happy and so was I, and I went home. I was home for maybe 2 minutes before I saw him through my window walking around looking for something.

I went out to see if he was alright, and he invited me over to his house for tea! I should have done this earlier as I’ve been living beside him for 10 months now but didn’t even know his name. I got ready, grabbed the cake, and headed over. They have a beautiful house, and the living room was really well decorated; with a samurai armor display and large, elegant Japanese dolls in glass cases. When I pointed out the armor and said it was really cool, they asked if we have it in Canada. I assume we have shops that may sell such items, but other than that, no, Canada doesn’t have samurai.

We talked mostly in Japanese, so you can imagine it was rather difficult for me. I went in feeling like I could understand what they were saying, but not at the same time; as if I was half expecting subtitles to show up under their faces. Things I understood ranged from the wife, Sakiko, having a younger sister, to their grandchild being allergic to eggs and therefore couldn’t have cake when he came home from school, as he would break out with rashes. She did most of the talking while the Grandpa that invited me over, Maiya, spent a large amount of time thumbing through a basic Japanese-English phrase book; mostly in vain.

They gave me tea, and they gave me snacks. I was there for maybe 2 hours and my head was hurting from all the conversion work it was doing. I haven’t really studying Japanese since I burnt out from it shortly before my mom arrived; the motivation just isn’t there unfortunately and I’ve forgotten many words. Either way, they were saying to each other how much fun they were having talking to a Canadian, and before I knew it they were inviting me over for a party. They were going to give me a big steak and other tasty Japanese food… how could I say no?

Unfortunately, they wanted to do it on Sunday, and I had prior engagements 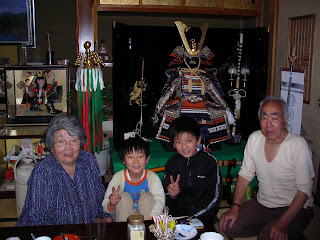 I had to attend to. They said we could reschedule to sometime next month, and I told them I would check my schedule to see what days were free. I got a picture of them, got some chocolate and soup as gifts, and went home to rest. I won’t tell you too much more about that Friday night, as it mostly involved playing an online game with my brother John for a really long time; let’s just say I woke up around 6 or 7 p.m. Saturday.

Let’s just say I knew it would be a rough day by how I felt when I woke up… well the 6 hours that remained of that day anyways. I showered, missed my train, and went out late for a poker party that started at 8:30 in Shiojiri. I was working out excuses for why I couldn’t go; half of which I thought were pretty good with how crummy I was feeling. I’m glad I kicked myself hard enough out the door though. I had to transfer in Okaya and I went to reach for my phone to double check what time it would arrive to see if I had time to eat supper quickly. But I couldn’t find my phone.

Uh-oh I thought, finally waking up more and more as I panicked looking for the thing. When did I use it last? Where could it be? I searched the ground, searched the train (end of the line, so it was just sitting there still) and asked the conductors and ticket booth people; all in vain. In less than I year I might have to buy a 3rd phone now.

I filled out a missing item report, grabbed my train to Shiojiri, and prayed that Charity would still come and pick me up even though I never responded saying if I was coming or not. Luck shined on me a little that night atleast, as she came and got me as I was working out in my head how and where to ask for Internet access in Japanese.

Still feeling down I began to abuse alcohol; that coupled with the only thing I really ate being that small supper I mentioned 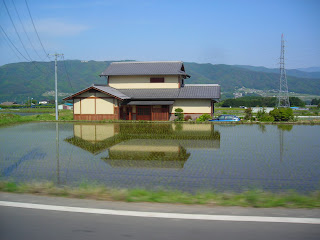 earlier. I tried to put it out of my head and enjoy myself though, and sat down for some poker. I had a really great time with that and ended up getting second place; I was doing good until they upped the blinds to a point where you had to throw half of all your chips in just to meet the blinds; forget betting or anything like that. The game ended and I had a great couple of hours of dumb luck and taking other people’s chips; I personally knocked out at least 2 or 3 people. (Get a straight on the river? Don’t mind if I do)

That night there was more of that African drumming at a different venue, but I wasn’t too thrilled about going, as I had seen them perform the previous week already. On Sunday there was also a large International event going on in Nagano, but instead I opted to join my newfound poker buddies on a road trip to Karuizawa.

Since there were six people, we piled into 2 cars. We had some walkie-talkies for the trip and they were used quite frequently, mostly for smack talking and things of that nature. Sometimes they were really useful for things like figuring out which way to turn next. I was content with snapping pictures of the landscape as it rolled by; I love spring.

I guess Karuizawa has a rather large shopping center. We browsed briefly through some of the many stores, but my interest dropped off dramatically when I saw some simple shirts for over $100. The boys decided to check out a nearby illusion museum while the girls did their thing with the shoes and… whatever girls do when it comes to shopping; I’m not going to pretend to understand.

Us manly men went to the museum, but almost never went in because of the $15 admission. I didn’t care, but the others bit their tongue. Inside we were treated to various 3D paintings. I wasn’t feeling too inspired or else I would have posed more, but we still had a good time working our imagination and angles to make it appear that we were interacting with these vibrant pictures. There were many pictures that required you to move from one side of the room to the other to see them move or change shape, while others mainly got you to pose.

I was mostly interested with the last floor, where they had an altered room to make one person look huge while another person looked tiny. We all took our turns 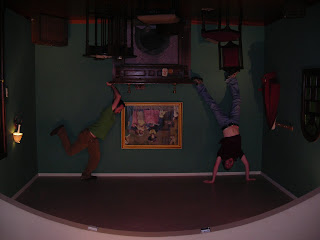 with various poses, and the final room was one that was upside down. Things were tied to the roof, so it looked like you were on the ceiling. Jake jumped a couple times to make it look like he was hand-standing on some furniture among other poses. (it looks better if you flip the pic)

We had a great time then headed back to the shopping district. We went into a foreign import store where they had boxes of kraft dinner for over $3 each among other goodies. After we went to an Italian restaurant where I had a paper-thin pizza I wanted to weep for. That pretty much decided it for me; I am going to have to throw a pizza party with my oven sometime (to be continued!).

We all went home, enjoying playing with the walkie-talkies again. When I got home though, my dumb cat somehow ripped the label off my BBQ sauce and spilled ½ its contents over my rug. I was not a happy camper. Luckily the rug is mostly black; some of the white flowers just have more of a brownish tune to them now.

"Many say I am just one to try. I say I am one less to quit." -Diego Marchi