This post has been rewritten three times or so, and in the end I cut out most of it. I have had a rather difficult week and alot of negativity came up. Perhaps writing it down like I did and venting that way was what I needed, as I am feeling somewhat better now, and no longer feel like I need to expose my baggage on the internet like that. That being said, here's what's left of what didn't get cut, some parts may still be negative as its poison was felt throughout. Either way it's midnight right now and I want to go to bed; gotta give my kids a test tomorrow.

It was raining pretty much daily before I even heard of Japan’s “rainy season.” On the day the season was to start, we have had hot, humid, sticky days ever since, but no rain. I personally am a fan of the rain, 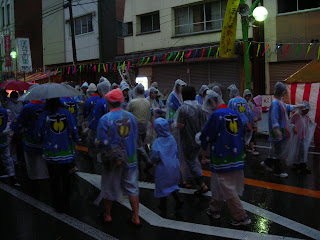 mostly if it involves me being indoors or under a dry umbrella. So when my little town’s once a year festival arrives and it pours the entire weekend, you can’t help but be disappointed at the irony.

Tatsuno had its annual firefly festival last weekend. I noticed two huge things right away. 1) there were actually young, good looking girls walking around and 2) there were actually people in Tatsuno. Never mind the festival decorations, the food stands, music and fireworks… but there were people walking around. I guess you don’t know what you’re missing until you are given a taste of things that could be right? I still remember that one weekend Jake and I walked around for hours and saw more snack bars than actual young people. (Please don’t make me explain snack bars again)

The firefly festival was unlike anything I have experienced. Sure the dancing and the festival foods were par for the course at this point in my Japanese experience, but it was neat to see so many people from different walks of life come out in their raincoats covering their team uniforms/kimonos and dancing their festive town dance over and over. Even though it was pouring rain, there were still many cute girls walking around in their summer kimonos under their fancy umbrellas on those traditional wooden sandals from long ago. I was told by my friend Neal that last year’s dance lasted for an hour or more but this one was maybe cut short due to being soaking wet.

We (Neal, Amanda and I) then trekked further down the road towards the firefly park. I was surprised I need to pay to get in and was somewhat against doing so given the current weather conditions, but ended up thinking that was one of the best $3 I ever spent.

The viewing started off slow, as perhaps the sun still hadn’t set completely. But over time, the park came to life. Through the lovely ambiance of waterfalls and running water, little green lights glowed brightly flew around the area. Before we knew it there were thousands all over, and the only thing you could do was gawk in amazement and cuss your camera for not being low light enough to capture this magnificence.

I don’t even know how to explain it to you, how to paint a picture. The closest thing maybe is imagining looking at the night sky on a clear, warm night while sitting near a running stream. Then imagine those stars to be bigger and greener. Imagine some of those stars slowly lighting up, then slowly going dim while others come and take its place. Imagine holding out your hand and having one of those stars fly into it, and sit on your hand for a while. Imagine that even though the night is pitch black, those stars are so bright you can see people and forage surrounding it; while some patches of sky were so dark all you could see were green stars sitting there. There were fireflies in the Christmas tress, in the thick bushes, flying in the air, and some were sitting on some people’s umbrellas. If it doesn’t rain tonight I definitely see myself going back again. (update: ended up not going tonight, maybe sometime later this week before they all fall out of season and die; apparently like cherry blossoms they are short lived)

Hmmm as for the rest of the week… I guess our intern, Yuri, has finished up her stay here and headed back to Tokyo for university. Before she left I was able to watch her give a class along with many other people in our English department. It was very interesting to see a class that wasn’t mine and from the student’s perspective. 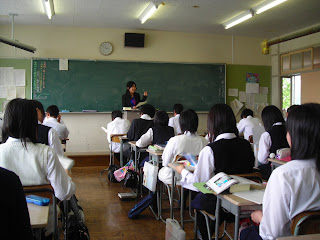 It was super organized and efficient which make me a little jealous as usually it’s a fight to hold their attention while talking; probably due mostly to them not understanding whatever it is I’m saying.

Amanda had a birthday party at a western restaurant in Ina on Friday night, which was alright. The party was deeply divided between Japanese and English speakers later in the night, and for some reason I was plagued by a killer headache. I hardly get those so I was extra sour, but the highlight had to be the birthday sundae they made for birthday guests. This thing was a monstrous pile of real ice cream, not that fake ice milk stuff you usually get so that was a real treat. Super tasty.

And the rest got cut; I hate to put my problems on other people (don’t mind me, really). Water under the bridge, right? Beware the flood...

When the power of love overcomes the love of power, the world will know peace. – Sri Chinmoy Ghose