The depths of madness runs only so deep

Last weekend I went to my first ever “English Camp.” This is where students and teachers alike gather and… learn English I suppose. One of the first things we did (and now something I want to desperately do in my classrooms now) was get water guns. If we heard any Japanese, squirt squirt squirt! Haha it was great, I was partnered with Neal for the first day and we squirted all the people anyways. Neal and I were given a lesson to teach, I will paraphrase it for ya:

A long time ago there was a boy that loved pumpkins and nothing but. He ate his parents out of their house and got kicked out of town for stealing pumpkins to feed his habit. In went pumpkins, out went bad gas, all day. Now homeless he happened up a monk who offered him room and board in exchange for protecting his temple from a robber. The boy agreed on the premise of all the pumpkins he could handle. The first day he almost ate the monk out of house and home as well; getting so full he fell asleep. That night the robber came and after seeing the sleeping boy, gave him a kick. The boy let out a monstrous fart that killed the robber and saved the day. (pictured: the big bad wolf takin' no crap)

Moral of the story: no matter how useless, smelly or bad a person can be; everyone has the ability to do good at sometime.

It was fun acting it out for the kids, walking up to Neal and giving him a kick only to be gassed to death by his colon’s wrath. I had always been afraid to attempt something like this at my schools, as getting them to follow along to simple game instructions can be challenging at times, never mind a story with a moral. But I digress.

So after we played another cool game not unlike the board game clue and gave the students delicious chocolate sticks as a prize. That night the students performed plays for everyone and it was amazing. I know I shouldn’t use girl words like “adorable” and “super cute” but I have trouble explaining some of the plays otherwise. The students dressed up and were very enthusiastic, the best maybe being the little red riding hood. It was priceless seeing the hunter come in, pull off the blanked that was the wolf’s belly I guess, and having the grandma and riding hood hop out right as rain and start dancing.

Another group did a “prepare for the future” kinda skit; you know the type. One is working hard all summer collecting food for the winter while the other parties. Then winter comes and the hard worker is ok while the other begs for forgiveness and scraps. They did this skit twice with 2 different scenarios; the one scenario the person shared their food in exchange for company that winter because they were bored. In the other one she basically kicked the other one out to die while she stayed home to play Nintendo Wii (awesome props). When they did their moral of the story at the end, the said it was Japan v.s. America, where people help each other out here and how it’s cut-throat over there.

Whooooooooo, controversial! I’ve seen plenty of homeless people in Tokyo but oh well. Other morals were great like this one wolf one. First this girl stood on the top run of a ladder, and then later slipped brown painted boxes over her body to look like a try. While she was doing this she fell and her group had to hold her up… definitely left an aura of uneasiness over me. How the story went was this wolf grabbed these grapes from this tree and they were absolutely delicious. He wanted more, so he took a running start, jumped and grabbed some higher up. They were good enough he wanted to go and get the last ones at the very top. Try as he might he could not get them as they were so high. He left thinking “oh well, they were sour anyways.”

Moral of the story: “It’s easy to hate what you can’t have” (and I learnt where the phrase ‘sour grapes’ comes from! Not that I’ll start saying it)

So ya, it pretty much didn’t matter what they said or did as it was so cute and well done everyone loved it regardless. Maybe what emphasized that point was when these two were paddling down a river. The one was a boatman or whatever while the other was a super intelligent scholar. The scholar made fun out of the boatman saying how they’re wasting their life by not being smart. Later the boat hit a rock and the scholar died because even with all his knowledge he didn’t know how to swim.

Anyways like I was saying
Boatman: “Oh no a rock!” they cutely fall into the river (laughter). “Can you swim?”
Scholar: “I can’t swim” (more laughter)
John (observing JET): “Why is that funny?!?!”

We laughed harder, and we laughed again later when they said 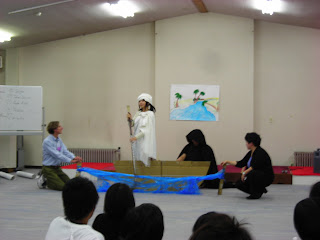 he died even though we all knew it was coming. That’s how cute this stuff was. Sometimes the stories were just confusing like this frog trying to (what I assumed) have sex with a princess. The princess hated him, lied to him, locked him out, and in the end kicked him down. After the powerful kick off came the cute frog suit and out came a prince! Night-and-day ensued with the shallow princess as she “broke the curse” or something and they fell in love. I don’t remember what the moral of this story was but I doubt it made sense. I would still watch it again though it was so cute and cool.

This continued for a couple hours but it went by really fast. That night we all got drunk again while the kids stayed up late and “speed dated” as I was informed by another JET. The next day some of them got from zero sleep to like 3 hours of sleep. One person said 15 minutes, haha crazy kids. This cool German exchange girl at Neal’s school taught ‘spin-the-bottle’ among other shenanigans. Either way, it was 4 girls to each guy and there were plenty of nice options for those kids.

On Sunday, the last day, we played a “scavenger hunt” with some “purikura (picture club)” What happened was the groups went around to find JETs standing around. They would play whatever game they had planned and get their picture on a sheet; hence the scavenger hunt. The winning group had 1 more picture than all the other groups so it was really close.

Anyways, this was my first time doing purikura and I can kinda see the lure all the kids have for it. You take 6 photos, pick the ones you like and make edits as you’d like. So you could superimpose ‘hello kitty’ over your face, or like one JET, superimpose a broken heart over your crotch. Mine were kinda dumb; on one I was kissing my bicep with an “I <3 U” speech bubble. Another had me make a big hearts sign with my arms (not unlike ‘m’ from YMCA)…

Anyways, when the day was over, the students hit up many people looking for their extra purikura and getting pictures together. One student in particular after a picture with me looked me in the eye and was 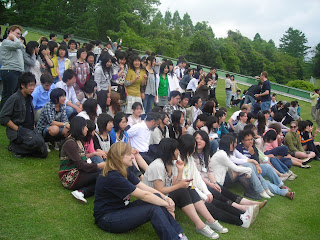 kinda creepy. “Look at my face. Remember my face. If you see me, say hello, my name is (…..)” I was a bit weirded out, and even more so after finding out she goes to school over an hour away from me. Other student exchanges were more fun with them saying “sekushi (sexy)” and even going so far as calling me “moe” (pronounced moh-eeh).

For the non-otaku/nerd inclined out there, “moe” is a form of anime in which usually young and cute girls dominate it. I love it when I can understand enough to surprise people. After they found out I was Otaku I showed them my new Mario toys-of-the-week. Seriously though, I buy a lot of cool junk here. (don’t judge me!)

Either way it was a great time, and I left all the negative stories out! Doomed to be lost in the wave of time… I was going to share one, but why leave it off on a bad note?

"Life does not happen to us, it happens from us" -Mike Wickett

The pumpkin story totally reminds me of a bus ride to work a couple of weeks ago.. I was "fortunate" enough to sit beside this one guy on the bus who wanted to tell me his story. One of the stories was about how he lived with a priest who eventually kicked him out because he farted to loudly. .. lol.. not a word of a lie! Luckily it is only a short bus ride to work! haha