My Karate Chop, Let Me Show You It

It was a pretty awesome week, I only taught one class because of the students writing tests. I suppose that made for some long days, but I went home early more than a couple days and killed zombies with friends back home when I wasn’t logging in to wish my brother a happy birthday or things of that nature. Some teachers took advantage of the downtime too and wanted to throw a BBQ party! 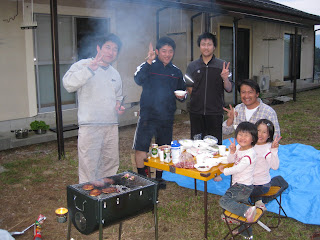 cleaned up for us recently, and had an amazing BBQ. They did a lot of fried meats and vegetables on the grill, while I put together and potato dish and put some hamburger patties and hot dogs on the grill. It was a amazing to me how mystified they were with my antics; I’m not sure they’ve ever done it before! Another thing I’ve taken for granted maybe. So I taught them how to make a hamburger with tomato and lettuce and stuff and they loved it. It was funny too, some people prepared their hotdogs the same way with lettuce and tomato; perhaps I need to be more thorough with my teaching. It was still really tasty, even if the tomatoes cost more than a dollar each.

We sat around and talked later, with them asking me to tell multiple stories. I surprised even myself with how many tales I could share, as long as they gave me a theme to work with (ie festival, travel, food etc) and I did my best to share the stories in Japanese. I like my lessons as I feel I understand a lot better than before; my listening skills used to be horrible, what with studying alone all the time and so on. I learnt interesting things too, it’s good to make Japanese friends; perhaps my language level is finally good enough to make meaningful friendships now with people who can’t speak English.

On Thursday instead of tests we had a class-match. That is when the different classes team up against the others in various activities. The sports this time were softball, badminton, tennis and volleyball. I was going to play softball until I found out about the Volleyball and couldn’t refuse. It was a really fun time, with the teacher team making it to the finals and many students crowding around to watch. What was shocking to me was just how weak I really have become. It was embarrassing, but everyone thought I was doing amazing still so they don’t know how much they’re missing. We took the championship and that last game made me sore for the next couple days.

I was going to see the new Star Trek movie that was opening in Japan on Friday, but I found out Thursday we were having a work party that night instead. We met at a nice restaurant in Ina to formally welcome Chiho Sensei in and give our parting wishes to Ono Sensei who went to Ina Kita to teach with Neal now. It was a good time I think; I’m just glad I have interesting stories to tell which helps steer the conversation away from being completely Japanese and me listing off in a drunken stupor from my lack of understanding as a result.

I was able to share some snacks and beer from Canada finally; my supplies are running a bit low on the chips that maybe expired a week or two ago. I still have lots that I brought from back home, although I think the container of peanut butter was bad as it’s all liquid inside and not really tasty. Talk about bad luck :) I’ll just need to buy the expensive, inferior stuff here. Neal still bugs me that I can open my own convenience store with all the stuff I brought back.

As with last week, the morning after a big drinking party I had to get up early to go out on another weekend adventure. This time we went to Omachi 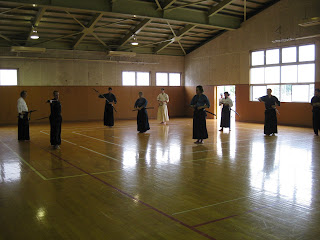 Budo Festival up North to learn some martial arts. My group first learnt about Naginata where you fight with something like a pike; a long staff with a curved blade on the end. After which we learnt some Judo which was unfortunately limited by one of the elder teachers and we didn’t even learn to flip people and throw them to the ground like what was learnt last year. I guess we learnt some submission moves that were entertaining.

After the festivities, we didn’t have much time to bathe or get ready unfortunately as it took about half and hour just trying to find adequate space in a room for the night as it was speculated there were people from a certain country who tend to only think about themselves and not about the benefit of the group, leaving confusion and inconvenience for everyone else. It’s a good thing they’re not the majority, at least not here in Japan. It’s just an unfortunate consequence of learning about another’s culture perhaps. I’m surprised how much I’ve been seeing other JETs lately and these things remind me why I don’t.

Regardless we had an amazing supper and good party that followed. After a group of us made our way out to the lake for a swim and Frisbee. Amazingly there were 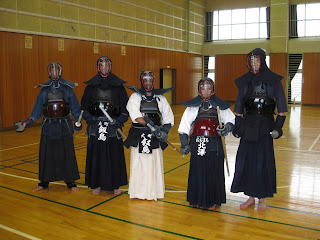 people still out there fishing off the dock at 11 at night, but when we got in the water and scared away the fish they left too. The water was kind of cold but still fun. A group of people on shore had a “great idea” to take people’s clothes and hide them, making some of the drunks swear bloody revenge which got a bit tense. Drinking brings out the bad in a lot of people unfortunately. I tried not to let it get to me (the angry drunks that is)

On Sunday we learnt some Kendo and called it a day. It was fun. Richard, Neal and I made our way back and had some lunch/supper together and discovered a really good gym to work out in. We plan to start up this week; it would be good to get fit again. For $50 a month you get access to a really good gym and a personal trainer; an absolute steal in this country given how many people pay over $70 for a crappy gym and no trainer. It’s probably because Brazilians run this one that it’s so good.

Exhausted, I spent the rest of the day on my couch reading a book. I need to take it tone down the crazy adventure scale and take it easy more often; although working out will give me more energy again :) it should be good.

"Man is born to live, not to prepare for life." -Boris Pasternak