It’s almost a frightening thing; how emotions slant works. I deleted a page or two from my last entry as I suddenly burst into rant after rant of things that were bothering me. I guess it was good to get it out, and later when my head was clearer I was able to edit accordingly. I suspect this entry will be similar.

Another busy week came and went. I finished 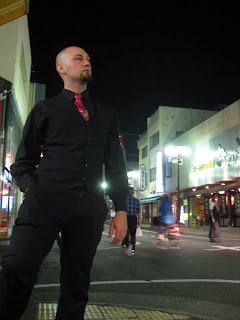 giving tests to my former student Nanako, worked out at the gym with Noboru and Richard, and went out for food with Neal among other things. School life is pretty good, with a lot of free time lately as my 3rd years work on a project. I spent a bit too much time online then talking with friends and reading news I didn’t really care about.

On Friday Richard and I went up to Matsumoto for Ashley’s birthday party. We were planning on going to the gym first; but didn’t have time with the long drive ahead of us. It was a really interesting experience being out in a city that is open after hours though. Ina is a big step up, sure, but here we went to more than one pub there, and all the while there were people on the street walking around enjoying the beautiful night.

Later on, Richard and I did the same actually; buying (comparatively) cheap alcohol at a nearby convenience store then drinking it outside the pub the rest of the group was inebriating in. I think it was pretty awesome anyways; one of my small pleasures is being outside at night and not needing a coat. Good, cheap drinks and good company helped top that one off. When we did go inside later, I got talking with some guy from Scotland, and we had some amazing conversation about whatever. To think you could just meet someone randomly like that; something else that is becoming a rare pleasure of mine.

Unfortunately it was 3 in the morning before you knew it and some people wanted to sleep. I would have liked to hang out at the castle after hours, or more shenanigans but oh well. I couldn’t really sleep in, so I played games until it was time to go on a camping trip up north.

We returned to the lake we visited during our martial arts festival and set up camp. Here I got a taste of Japanese “camping” again. You know a gravel parking lot right? Ya, that was the campsite.

At first I thought it must have been a sick joke, but no. I ended 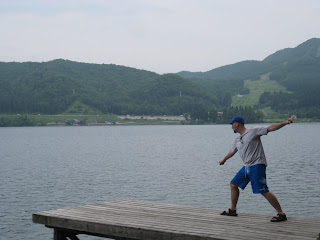 up sleeping on top of my sleeping bag entirely to get as much foam between all the rocks and me as possible. It was especially sick because you were surrounded by beautiful nature. Whose idea it was to dump a bunch of rocks and make you sleep in a parking lot I will never know.

I wanted to rent a kayak, but the dude that spoke too fast in only Japanese wouldn’t let me if I didn’t have lessons; which he provided for over $50 the next day. I said screw it and went swimming. He came by not too long after and kicked everyone out of the lake; saying if you didn’t have a life jacket on you couldn’t swim. I suppose there were a lot of rocks and the water was cold, but lighten up a bit dude.

If you wanted a picnic table you had to rent it. Actually anything you wanted, like a grill to cook over the first with, had to be rented. All you got was a gravel parking spot, and half a cinder-crete block to build a fire in. I wish I had packed a chair, or more stuff in retrospect. The camp next to us had some Japanese folks inside: It was a massive tent where they had a dining table, chairs, tables with ingredients and other household stuff, and in the middle of the table they watched a DVD with the lake in the background. It made me wonder why they just didn’t eat at home.

That’s enough complaining. I guess some fun was had; Darby was giving out watermelon, and we met up with another dude that was hitchhiking around Japan. He was a cool guy with some awesome stories; not to mention a natural entertainer. I should grow a pair and try to backpack around Japan too. For example right after he got into a car, the guy invited him for supper and to stay the night before he could even give his name. That is a side of Japan I’d like to see in stark contrast to the cold vibe I get every now and then on the street or wherever.

I was exhausted from Friday’s adventures so I wasn’t up late. Richard and I crammed into a tiny tent; and it poured that night. It poured 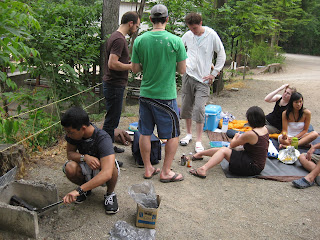 late into the morning too, when we gave up and decided to try and run for the car. This happens to me way too often when I camp it seems. Or maybe it’s so miserable it stands out in my mind. I remember my camping trip with my mom and how that ended; at the bottom of a hill getting a downpour flooding our tent. I guess that was one good thing about sleeping in a flat parking lot, we didn’t get overly wet inside the tent.

Some people went to the onsen, but I wasn’t having any of that. I apologized to Richard but I just wanted to get home; and there I spent the rest of the day, not really doing anything in particular. I napped for a couple hours, the only thing note worthy.

Sure enough, I deleted a whole ‘lot of stuff later and want to try to end this on a positive note. I’ll be going to Kyoto this weekend finally, alone. Maybe it’ll be the escape from myself that I need.

"The years in your life are less important than the life in your years." -Ralph Waldo Emerson
tnoy
Posted by Tnoy at 8:02 AM