The week went good I think. I had a good Japanese class Monday, I am starting to see a Japanese tutor Tuesdays. On Wednesday I had supper with Richard and then with Junko on Thursday. During my lax time at work I’ve been kicking myself hard to study and am currently dusting off the 3rd textbook, reviewing it again to make sure I fully understand/have memorized its relevant contents.

On Friday we had some teacher’s meeting or something up in Nagano city. The meeting was alright I guess, 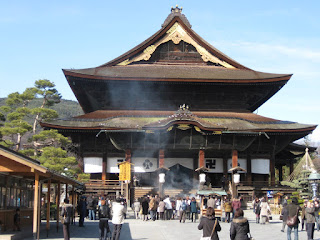 although I was dead tired for most of it. It was good seeing people I don’t get to see too often and getting surprise birthday hugs. After the day was out, we went for Hawaiian burgers; then it was a boy’s night out on the town with stimulating conversation, tasty food, and games. A boy’s night out was greatly needed and much appreciated by all those involved; it’s nice leading a peaceful life sometimes.

We slept in Saturday after staying the night at Cam’s. Richard went home a bit early, but Neal and I saw the famous Kouji temple there. I did it mostly because the next day was my birthday and I figured I could use all the luck I could get. I ended up buying a Japanese charm for my birthday, which co-incidentally doubles as a safe-driving charm to hang in my car. Being 25 is a “super bad luck” year as I’m told in Japan, so although I don’t really believe in luck and all that, maybe turning 26 will be a good thing.

On Sunday Leslie and Shane came over around noon and we made spring rolls from scratch. I love cooking and it was very interesting making oriental food like that. Neal came over later and we all hung out for a while. Later on, Craig showed up and Michelle came over too and we all went to buy ingredients for my first nabe party!

Nabe is something like a hot pot. You put broth in a big bowl, then add ingredients to slowly cook. We had all kinds of veggies and meat, and cooked it in a kimchi broth. It was super tasty, and surprisingly cheap! I don’t know why I don’t have nabe more often with how easy and affordable it is. The huge porcelain bowl I bought for it was only $5.

I’ve wanted to do a nabe party for so long and it went so well. Leslie couldn’t stay for it though, but before she left she took out a cake of brownies 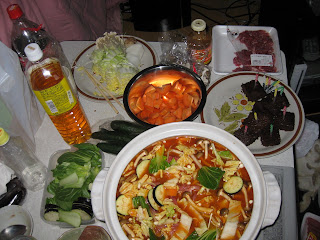 with candles on it and everyone sang for me. I was quite surprised and extremely delighted, I didn’t have anything like this last year. It was really tasty, and we had real ice cream with it too, the thick creamy kind.

We watched the newest Futurama movie in HD, we played video games, and just had a great time. A truly great birthday. The only regrets I had was I didn’t help much with cleaning, they wouldn’t let me given how it was my birthday :) I guess that’s just me wanting to be a good host, or that it’s weird having your friends wash your dishes.

I spent over 2 hours in my email this morning writing back to friends and family sending their birthday wishes. Thank you everyone.

"What would you attempt to do if you knew you could not fail?" Dr. Robert Schuller