I have no excuse for this being a day late other than Richard coming over Monday night and us playing video games until 1 in the morning, then last night because it wasn't Monday I forgot. Graduation has come and gone so free time is abundant.

First was Tatsuno’s graduation last Tuesday. It was about an hour and a half, 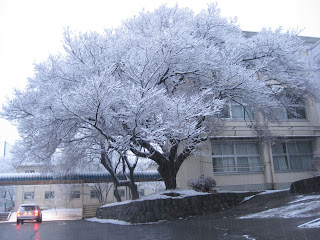 and my toes were really cold in that big un-insulated gymnasium. Their monster heaters are always impressive though, about the size of a oil barrel glowing red with all the gas it’s cooking and heat it’s throwing. My Japanese is improving, but not enough to fully follow whatever was being said up on the stage.

The reason it was so cold was it was snowing outside. I love the snow in Japan compared to back home; it’s not so windy so it falls softly, and it’s not so cold that it melts soon, leaving you frequently with that “beautiful spring day” feeling where you hear water dripping everywhere as the white menace succumbs to the atmosphere. I love it.

That night we had our year-end party. Good food and good times were had, and this time my Japanese was good enough to understand a decent amount. Like when one teacher had to make a speech, I used my powers of verb conjugation to work out that he said, “I’m drunk” in Japanese. He didn’t say much more. It was quite the speech! Haha he almost dropped the mike, but handed it off soon enough to the next teacher. Here, the homeroom teachers are honored for being second parents to their students for the last 3 years.

I made it to the second party as well, making snowballs and handing them out to my drunk comrades along with whispers and pointing to cause trouble. After the second party though it was 10:00. Some people wanted me to go to the 3rd party with them too and sing karaoke together, but I had to be good, the next day was Yayoi’s graduation. 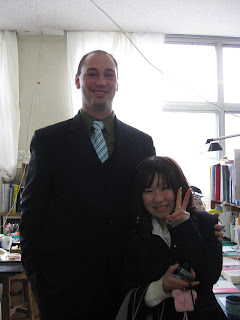 slightly, like it was only an hour long and the students hung out for hours in front of the school taking pictures of the last time they’ll be together and things like that. There was a party for this event too, but for some odd reason they invited parents along, and it became a requirement to use some of your holidays to attend. Needless to say I regretfully couldn’t go, I need that time off to travel.

I leave Saturday already, it’s coming fast. Needless to say there won’t be an update for a while, unless I get bored in Canada while everyone is at work and I don’t have video games or something; which is possible. I’m trying to get some presents together and pack at the same time. I found out today that there is a different teacher moving into my house on the 29th of March, bumping up my moving schedule and cleaning responsibilities considerately. A lot of progress has been made, but there still is a far ways to go.

And to leave you on a high note, on Friday the New Zealand-bound students came for another lesson with me, and I read them a book. It was a great feeling having them absorb whatever I threw at them and feeling their hunger for more. It’s such a difference being with people who actually do want to learn. They were a lot of fun, our last session together is probably this week, before they head out for their home stay and before I visit Canada.

"There are worse things than looking stupid. Sleeping through life is one of them." -Laura Preble