Congratulations are in Order

My avoidance of studying continues! I’m slipping in pieces here and there, but I’m mostly doing other stuff. Let’s begin! On Monday night I got home from Tokyo and posted my blog, then on Tuesday Junko came over and I cooked pizza in my oven. I love pizza and it turned out wonderfully, the company was great too. I think we did some language exchange, but either way it was lots of fun. We later watched a Japanese classic, “Porco Rosso”; an amazing animated movie about a cursed pig flying an airplane in Italy during the lead up of WWII, go see it!

On Wednesday, Neal invited me to karaoke 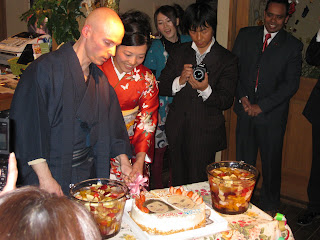 with his English class. There was lots of food and all you could drink again. I even sang my favourite Japanese anime song and I nailed it! The hiragana (one of the Japanese alphabets) was moving fast, but I could read it and keep up this time; my studies are paying off. It was a great feeling to give a proper performance of a good song, and hear the ovation.

Thursday and Friday had all the JETs and many others gather in the nearby Shiojiri for a Teacher’s conference. I went last year, but this is a yearly event. In all, it was a good couple days of discussing lessons plans and teaching ideas among other things like how to deal with kids sleeping in your class. Komagome sensei came from Tatsuno with me, and together we presented how we teach a Jeopardy review game. I think it went over pretty well; I can still remember not too long ago when I was in front of ½ the people, presenting on my 4th year final project in Engineering, and how I was so nervous I chocked and stuttered out a mess. Now I’m fairly flexible and coherent, and can wing my presentation; truly a huge leap for me.

The fun of Thursday night was axed considerably from last year: restricting drinking to the cafeteria and only until 10, then ‘lights out’ at 11. One theory on the new anti-fun laws was one JET (out of over 4000) was caught with a tiny bit of weed in Hokkaido (really far away). Another theory was 5 years ago some idiots got drunk and broke windows and threw stuff out of them. My personal opinion is most JETs need these kind of strong-armed laws, as I remember last year one jerk got drunk and tried to fight me, you can read about it if you want to hear the story.

Either way, that sucks for the rest of us. I guess it was something of an Eye opener for Neal as he is even more concrete about leaving his job, and I am pretty much fully in the same boat as him; although personally I can still see the shore in the corner of my eye should something or someone come running up and flagging us down before we sail out of sight. I love my job, I love the kids, I love the new friends I made… but my town is killing me. I can’t even take a bus to the airport anymore; they cut the service. Just another inconvenience on top the growing pile like the laundry I can’t dry. Or that I woke up a number of times last night because my face was numb from the cold.

Before that spirals out of control, after next week’s test I’m going to have to seriously look at spicing up my resume. I’ve met amazing people in Tokyo pretty much every weekend I’ve gone, only to hardly hear from them again after going home because my logistics leave a lot to be desired. I’ve decided I’ll either quit and go home in July, or I’ll get a job elsewhere and visit home in the spring maybe; it’s been long enough that I want to visit friends and family; and see if I can still properly eat with a fork and knife. Not to mention some of the shopping I want to do, especially with the exchange rate!

Friday night after the conference I caught up with some family and friends back home; one of the more interesting stories of which was my cousin Jerry’s run-in with a meteor! Pretty exciting stuff.

Saturday saw me study a bit finally, then 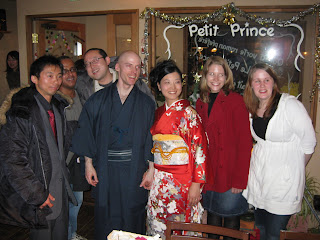 later we went to Brett and Kaoru’s wedding party. The actual wedding was small a week or two prior for family, but now it was the friend’s chance to share in the celebration. The setup was nothing like wedding parties I’ve been to back home, with us being stuffed into a corner where we could hardly see anything. I guess I couldn’t understand most of the Japanese being spoken anyways.

But ya, Brett wore a traditional Japanese outfit and Kaoru wore a beautiful silk kimono. She was so elegant and gorgeous. We got a chance to talk a bit and she joked about how many ropes were tied around her stomach; a lot of layers are involved apparently. She then said my wedding would be next. I told her it wasn’t likely, I’m still working on step one. She was shocked I was still single and started glancing around the room to find a partner for me. Comments were made about how I need someone with me in my big, empty house among other small talk. She’s so sweet and she meant well, but given the atmosphere and just how stunning she was, I couldn’t help but be a bit down after. Good thing it was all you could drink; they had some kinda yogurt liquor that tasted better than candy. Time to move out of Tatsuno.

The food was good, the drinks were good, the slideshow was great and the newly married couple was fantastic. I assume the talking and stuff was good too; of the bits that were translated for me were how they first met and things they wish for each other: like for Brett to not buy so many DVDs or something.

Sunday came, and Neal with his 3rd eye could sense I needed to get out of my house. We went up to Suwa to visit Craig, who was cooking up some traditional Southern food. I guess we have a lot in common, we both like cooking and entertaining guests. So the meal seemed simple enough: gravy, biscuits, bacon and scrambled eggs. Oh and gravy. LOTS of gravy. Apparently you can buy it in instant powdered form; I gots to find me some… :D

It was strange at first: I mean, gravy on bacon? Gravy on scrambled eggs? I am now convinced I want to visit the south and help them rise again; it was amazing. Well really, how can you go wrong with gravy? Craig even put on some southern music in the background to set the mood. We ate so much, and then later had cake that Neal and I brought for dessert. It was just a pleasant day of taking it easy. He has an awesome house too, which after a while clicked in that it was exactly like my house! Kinda.

I guess they spent a year and 10k renovating the place, and it showed with how new the place looked. It was a good contrast to 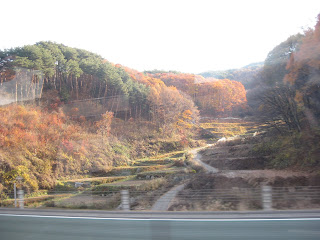 my shabby little place, of which I felt like I was camping the first month or so in it, I mean he even has a sink to wash your hands! My house has since got some character, via me hanging posters to cover the dirty and cracked walls, but I wish I could do more. I can’t wash the walls so there goes fresh paint; there are heavy cracks in it anyways. Craig showed some preference to my place, but I think he’s got a great set up. He even has a patch for a garden; it’s right in front of a constantly running stream, creating the beautiful ambiance of running water in his house. It’s a lot better in the summer he says, as the house is more open. Just beautiful.

So ya, good food, good company, then back to the books a bit. I have one week left… I write the test on Sunday and given the old tests I’ve looked at recently, it’ll be ugly.

"The key to happiness is having dreams; the key to success is making them come true." -James Allen