I’m teaching a Christmas lesson for many of my classes, as on Thursday I depart for holidays for a couple weeks to Thailand, Taiwan and possibly Cambodia. That being said, I don’t know when I’ll be able to update again, probably around Jan 9th.

Anyways, for the first 10 minutes or so I show pictures of Christmas 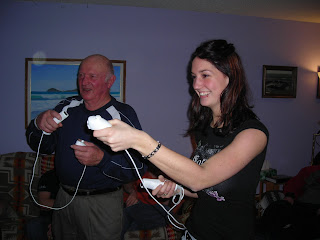 back home in Canada, then feel a bit home sick as I miss my friends and family. It’s fun pointing out things like how my family likes cranberry sauce with their turkey, how we don’t do “Christmas cake” in Canada or eat ‘Kentucky’ (KFC. The Colonel has been decked out in his Santa suit for over a month now outside his stores, they make a killing this time of year.) I show pictures of the monstrous turkeys, our game of “grab bag” with the presents, what we do when Santa comes, my family, and my Grandpa playing Wii boxing with my sister Melissa among many others.

After the pictures, I lead the class in Christmas carols while playing a Disney CD in the background that they can sing along to. One class was feeling bold and we tackled “Rudolf” which turned out pretty good. The kids are cute and try hard even when they’re shy; music is great that way. I usually close the class letting them play some find-a-word and crossword themed Christmas games.

On Thursday I visited my handicap school for my bi-annual class. So, we briefly talked about Christmas for 40 minutes and the rest of the day was spent hanging out with the kids. I helped them cook a tasty Japanese dish, played games, and near the end of the day, sumo wrestled a student that worked his way up to the championship. I picked him up and tossed him out, it was quite fun. Although different teacher sumo-ed a smaller kid, throwing him to the ground, and then he snapped. Kicking him, submission-moving him, screaming wildly into the air and elbow-dropping him on the mat. It was hilarious watching this old dude grief on that 8 year old; I hope when I snap someday it’s half that amusing. (He was joking of course, the kid loved it too)

School aside, Tuesday night (or was it Monday?) Junko wanted me to teach her how to cook pizza after I made some for her a couple weeks ago. Well I don’t need much more of a reason than that to make pizza. I think the bottom line of my lesson was: throw in whatever you want. We made 2 pizzas; I was in charge of one and she was in charge of the other. It was fun; she made something more ‘traditional’ (if you count entirely too many mushrooms and a pile of corn) while I made mine a bit crazier, using Caesar salad dressing for the sauce to prove my point. It was absolutely delicious and we ate too much again. Maybe this is why I’ve put on a few pounds recently?

On Wednesday Neal cancelled out on our tradition again, but I ended up going for burgers with Richard instead. I ate a triple patty thing with cheese and bacon and other stuff, and felt so gross after. Burgers in Japan usually don’t have a bun so I was eating pure flesh, save for the cheese and grease. I knew my Filipino friends were leaving soon, so I called them and made the extra effort to see them off. I ended up walking almost an hour to their place and got them a cake for Christmas, and as a going away present. We hung out for an hour or so having a great time, they’re so much fun. I wish I spent more time with them while they were here; but that’s the story of life right?

When it came time to say goodbye I gave them hugs and well wishes, and some of the girls started crying. Maybe it’s just me, but sometimes it’s still hard 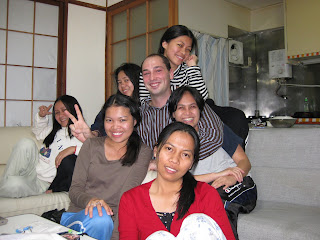 to believe I can have that strong of an effect on people; I think too much about society as a whole compared to the individuals that make it. I’ll miss them too, we had great times, and I should leave it at that I guess. Hopefully we can meet again someday; after seeing pictures of my family they want to meet everyone (and some want to marry my brother John).

I don’t remember Thursday night, but I remember Friday was spent with anime and relaxing. I was going to go to Tokyo with Neal, but he had a family emergency and had to cancel out. Either way, I think I needed the time off to be a hermit and closed off from the world for a bit; incidentally this was my Sunday as well. On Saturday though I dragged myself out of the house to visit Neal in Ina; we both needed to get out of our houses I guess.

We had a great day starting by eating at a Sri Lankan restaurant, a trip to the mall, renting a movie, going to the onsen (spa) and just relaxing and hanging out. The mall trip really stands out for me though, as they had a world-renowned fortuneteller there, I figured what the heck eh?

So this was my first time with a fortuneteller and I paid for 5 minutes. I got a translator in to help me out so I think she was flexible on the time limit because of that. I didn’t know what to expect but it was interesting, telling her (through the translator) to give me something basic and general, as I didn’t really know better either way.

She starting off with a piece of paper saying how my life would change quite dramatically in 2010. She told me other things, like how I should continue to live in countries other than my own to grow and experience things I never could back home. Later she went on to say how my first marriage…

Haha yea, I heard that and I was like “first?” geez that possibility didn’t even come into my mind for some reason, but like with many fortunes you get, it’s easy to bend your reality around making sense of it; not to mention it’s kinda changed the way I think about things again. We all think we’re superman and tragedy can’t befall us, but really no one is infallible. I’m temped to bring up that bad quote “don’t take life too seriously, you’ll never get out alive” story of my life though really, I gotta learn to relax better; learn yoga or something.

Anyways my first marriage ends in divorce for reasons the translator struggled with. Either way it sounds like it was the girl’s fault! Haha she nagged and didn’t like little mistakes I made and it became a bigger problem. Or something. Either way, my second marriage is supposed to be really happy because I sit down with her and explain who and how I am and she understands.

I was asked to make a question. Ok, “Do I teach another year, or do I go back and do some degree related work?” I don’t know if it got mangled a bit in the translation, but her advice was for me to study for my masters if I had the money to do so. Through more education she thinks I’ll be happier.

All right so that was an idea I’ve been kicking around for a while now, but finally it has been shoved into the limelight 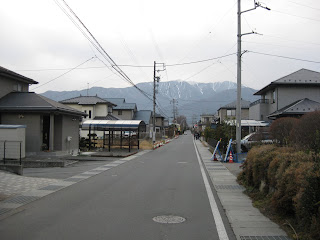 like it deserves. Should I get my masters? I think next year what I will do, is first move to a bigger city; Tatsuno is killing me. Second is to try and get an Engineering job. Should that fail, just teach in a bigger city and start studying for my masters. I’m thinking of doing it as a research project on applied fiber optics. (again, it’s been in my mind for a while) I’ll send some emails to some profs in my university for basic inquiries and stuff; I never thought I’d be doing this 2 years ago when I graduated, but now it kinda makes a lot of sense to me. It’s good to be out of school for a period of time. Maybe I’ll be Dr. Tony yet! Muhaha

So back to the fortune, I don’t think there was too much other than take care of my back and to never worry too much because god is always watching out for me. I thought that was pretty cool, I could always use some kami-sama in my corner (kami = god). I’m glad I went and I’d probably go again, it was a good experience getting me to think about things I should be in the first place.

But in the meantime, I’m leaving for Thailand in a couple days and I got a future divorce to start worrying about… if I don’t post in the meantime, Merry Christmas, Happy New Years and Happy Holidays to all of you (^_^)ノ it’s been a hell of a ride so far, I’m not getting off anytime soon.

"If you want things to be different, perhaps the answer is to become different yourself." -Norman Vincent Peale