On Saturday since there are more Americans than Canadians in Nagano, we celebrated thanksgiving in November and not October. Curses eh? If it were up to me, I’d say we should celebrate thanksgiving twice! That way everyone wins; more turkey! Yay! Oh I guess they’re doing something for Christmas, but I’ll be in Thailand then.

Since my chicken was a success 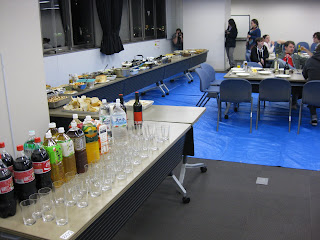 at my BBQ, I was volunteered to cook another bird. I got up early and in my study-avoiding habits started cooking it rather early. That’s alright I guess, it was done almost an hour before I had to catch the train so I wrapped up the cooking pot thing whatever-you-call-it in a towel to keep it hot and jumped on the train with Michelle and Dougal.

The event was to start at 4, but the reason they made it so early was because you know it’ll start late and last year we had to hustle out of there before risking getting a fine. We were not in Matsumoto this year, but Ina, which is a lot closer for me. Anyways, of course it didn’t start for a long time after and I was antsy so I did my carving and gravy making early so I could relax; leaving my poor bird to get cold for the next hour or so out on the table. It still tasted pretty good, but I still need more practice making gravy.

When we did start eating it was closer to 6 and a lot of people had a number of drinks on empty stomachs waiting for it to start. The wait was definitely worth it though. There were so many foods and it was so varied and there were even other new, cultural stuff thrown in like spring rolls from China, Sheppard’s pie from Scotland and strange desserts I’ve never seen before. Of course everyone heaped up their plates buffet-style and each forkful was a different splash of great taste in your mouth. Erica bought real, proper turkeys from an American military base near Tokyo so that was a super treat, and she prepared it with pepper or something, which worked really well. Someone made a container of gravy by itself with pepper and mushrooms and other tasty stuff.

But as my friend Steve said it doesn’t do much for me to describe how something tastes as you can’t enjoy it and it’s just making me hungry. I ended up eating so much my stomach was physically sore for 10 minutes or so as I remembered a cow we had back on the farm that ate until its stomach exploded and we found it in the morning with its legs sticking up in the air, offering scratching posts for his pals standing around. I wasn’t going to let these guys scratch on my bloated corpse too so I stopped eating and got intensely sleepy; it wasn’t even 7 yet! Haha we all stuck through it though and I got something of a second wind later on so I could at least be half social. Most of the rest of the evening was spent sitting around and talking.

The cleanup was something odd too, even with 30-40 people cleaning, it still took over ½ hour to get everything done. During the clean I went to put away an oven tray, and I discovered that someone forgot a whole turkey in one of the ovens! Some of us took pieces home; I grabbed a large leg. I made breakfast from it: a leftover turkey sandwich with mustard and pickles and butter. It’s been so long and it was so tasty… it was almost a spiritual experience.

I spent a lot of Sunday wondering when I’d get a certain phone call. A mom cornered me when I was shopping last and invited me over to meet her family, but the call never came and I got a little bit of studying in along with all the other activities like watching funny cartoons and catching up on some emails. I have less than 3 weeks left before the test and I spent a good amount of time trying to find a mock exam to help me get used to the format. I ended up finding a Kanji list that I’d need to know, and I’m maybe 2/3 of the way there. If what my new friend in Tokyo said was true, that’s not nearly as important as knowing the grammar, which was half of his test. The hunt for an old exam continues…

Now that I can visualize a ticking clock, the motivation has been kicked up another notch. At this point though, I think I need to go to a library or a coffee shop or something to study as I have too many distractions at home now and most of my studying ends up happening at work.

Oh ya, Thursday night I met up with my friend Junko and we got Italian food together. I convinced her to play some video games after, and my controllers 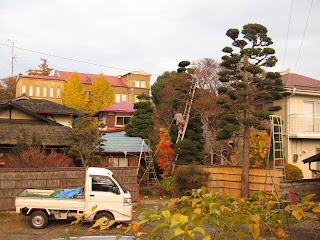 had some dust on them. I guess it’s been a while since I’ve played my old games, but it was still fun. Not to mention really cute hearing all the little Japanese phrases come out while struggling to keep Mario from dying.

I was talking with my friend Matt back home and I can’t believe how long it has been since I had a real conversation about games and gaming last, and I even met my brother John again online with his cocaine addiction better known as World of Warcraft, or W.O.W. if you know it. Either way he has the new expansion now and I don’t, so we couldn’t play together. He got me to ‘sign up’ with his guild, which was like an online interview, as I needed to divulge how I play the game, why I play the game, what time zone I live in; there even was a “tell us about yourself” section, where I put 6’1” male, etc. Had I not already been a member, they were actually going to do a 10-15 minute interview to decide if I could join or not. There is such a fine line between gaming for fun, and whatever these people call their lives.

I came close to ordering a couple hundred dollars worth of games (so 4 games) to be shipped to me, but luckily was reminded I don’t have time for such indulgences yet. There’s so many good ones that came out recently, and it’s getting harder to ignore with the Christmas releases gushing out. Sigh; someday…

"You have a solemn obligation to take care of yourself, because you never know when the World will need you." -Rabbi Hillel