The Brilliance of Red

The four-day workweek came and went with little things happening here and there. I sent money home, followed the historic event in the U.S. with friends and bought plane tickets for my Christmas vacation to Thailand/Taiwan. It would have been nice to visit family, but the price and time needed was a little too high unfortunately. When February comes and I know if I’m staying a 3rd year or not, I’ll need to make definite plans to go home for a bit. It’s crazy to fathom that it’s been as long as it has been. 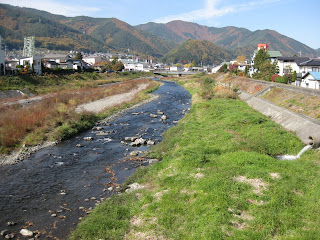 and we ate at a BBQ restaurant in Tatsuno. I’ve lived here over a year and haven’t gone yet; it’s a really nice place. Unfortunately by the time plans were made, I already cooked up some awesome chicken fried rice at home and wasn’t hungry; I still enjoyed the company and barbequing for the two though.

On Saturday Ono Sensei invited me over to her family’s house for nabe and drinks, similar to an outing last year. It was a really good evening again of delicious food and lots of drinks. Mr. Ono took out a large bottle of sake and somehow the two of us finished it; 1.5 liters of 17%. When it was finished though he got really sleepy even though it was only 8:00, so I went home and… I don’t remember much after that so I must have went to bed. I must have turned the heater on though as it was dry in the morning and I had to put more kerosene in it. You gotta be careful with that sake, I think I woke up a couple times in the middle of the night wondering if I had been sleeping; Tequila does that too.

Sunday was an extra special day… too much video games. I put 10 hours into a game or so and it was really nice just relaxing. My study progress has slowly dwindled daily to the point where I sit around not doing anything, so I figured this break was something 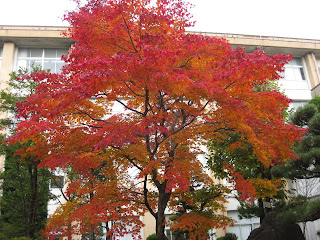 I needed to get out of this slump. The test is only 4 weeks away or so and of course I’ll be busy in the meantime with stuff. When you’re avoiding studying you do lots of stuff you normally don’t like clean and cook huge meals; I’ve been eating a little too well lately since celebrating all that weight I lost and gained a couple kilos back. I’ll get back into the swing of things again soon, maybe it’s the recent cold that brings on this lethargy. 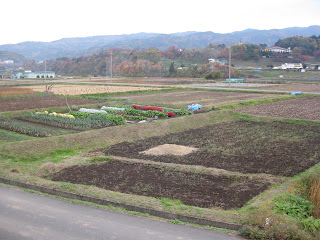 hunched over wrapped in blankets trying to keep warm. The heaters haven’t been installed yet and it’s really nippy. My fingers are a bit purple as I type this, but I put on a strong face because I didn’t bring a sweater or anything, although I finally wore a toque to work today. All these pictures are of things I see almost daily. The trees are a brilliant, vibrant red and colours are everywhere in this beautiful place.

Well you don’t need to hear me talk too much about nothing; not much happened and it was a great time anyways.

"Perseverance is not a long race; it is many short races one after another." -Walter Elliott