Lately, I’ve hardly had work or a job as much as I’d say there was a weekday lull between each of my traveling destinations. That being said, last weekend I went on another 3 day weekend adventure to Tokyo and told myself I need to take a break from travel after that; I haven’t studied Japanese in over two weeks and that makes me a sad panda. Even looking at my flash cards again for the first time last night had me wondering where I left off even; not a good sign.

Anyways, flash back to early morning Saturday, where my alarm DID 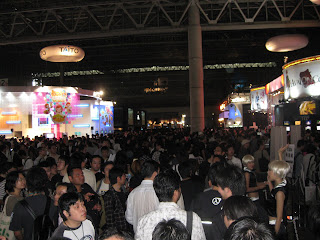 go off so I could wake up and not kill myself trying to catch the bus. Why was I going to Tokyo again? For the Tokyo Game Show of course! The reason anyone would visit Japan right? Well, turns out this year, not so much. Last year I went with Neal and we had a jolly good time, this year they sucked as much fun out of the event as possible if you can believe that.

It started by waiting over an hour to buy a ticket to enter the place; 2 people selling tickets for a throng of thousands. Then after that there was another line just to turn your ticket in and enter. Then when I got inside, on more than one occasion people would run up to me and say “no pictures!” when my camera was out, making me wonder why I was even there. The cosplay should make up for it right? Nah, it was really lame this year, maybe half of what you saw last year, and the vast majority I didn’t recognize at all. Also there were many rules posted all over the place and cops crawling the place ready to confiscate your camera if you didn’t follow them.

Intimidated I headed back inside to see the stuff and get free lootz. Last year you got posters, toys, game demos, candy and cool stuff. This year they didn’t even give bags to hold the boring purchase catalogues they were handing out. They even found a way to organize the place so it was much more congested and claustrophobic even though you were in a monolith of a building. Even some of the booth babes wouldn’t let you take pictures of them, what a rip off. I have doubts I will attend next year if I’m still here, actually I’m surprised I wrote over a paragraph about that place; I guess I should have cut out more of the negative.

Bad taste in my mouth, I met up with Brian and some new JETs I did an English camp with a little while back (Thersa and Phillips). Although one hour in the place was plenty enough for me, I decided to stick around and hang out with Brian because he’s a cool guy and scope the place out a second time. He too had his fill before long, but it was kinda neat acting like some kinda chauffeur, giving tidbits on companies, products, and offerings that we were seeing that I had read about already on the internet; no surprises for me.

He had some family coming in that night so we parted ways, but I caught up with another long lost friend, Anita. She used to be in Nagano prefecture too a while back and I haven’t seen her since; she invited me out to a live music concert. It was neat to be in a small venue like that watching the bands; even though it was in Tokyo and on the 5th floor of a building, it was pretty much exactly like the small club back in Ina, Gram House. The crowd was, well, Japanese though, and they mostly stood watching and politely clapped after each righteous guitar rifting, room shaking song; no dancing.

I hadn’t had nearly enough drinks to get the party going in this atmosphere, and at those prices it wasn’t going to happen, so I was fairly happy when our group got out of there to a more traditional Japanese drinking venue where there’s a hole in the floor to put your legs to give the short table the illusion of being low and traditional. These ‘izikaiyas’ as they’re called are visited often for ‘nijikais’ (second party) as they have the ‘nomihodai’ (all you can drink) and snacks.

Anyways, I met up with some cool people here! It was great seeing Anita again, and it was great being in a venue where you could talk without yelling into each other’s ears. Not to mention it was smoke free, clubs can really suck here when you smell like a sewer after you leave. Among the new people was a real cutie named Shiho. She had a bit to drink, which was a bit shocking in itself as Japanese girls usually never drink and we had a great talk. She’s really cool, and we agreed to meet up again before I left Tokyo.

The next day, a group of 7 of us or so got together to visit the ramen museum in Yokohama; apparently the second largest city in Japan that is a little bit south of Tokyo, although I’ve never been here yet and my travel guide only has 3 pages on it whereas there are like 100 pages on Tokyo. Anyways, we got out to the ‘museum’ and there wasn’t much to see and nothing was in English. The big draw of the place was the basement, where a couple floors down the place opened up into a large olden-style city. It was so cool having this locale pop out of nowhere. In this underground city were many different types of ramen shops, and throngs of people in lines for each one.

We ended up eating at a burger restaurant 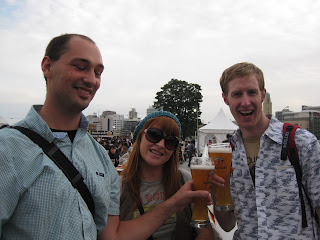 nearby as we didn’t want to wait in line, then went to a special area in Yokohama where there were really cool things to see like huge buildings, replica ship museums, amusement parks and old German architecture where some of the first foreign settlers were forced to live when Japan was forced to open its borders to the outside world many years back. In this German area was our prize: my very first Oktoberfest. (I know I blinked in this picture, but Brian looked too damn happy to not post his mug)

Thousands of people were out in the sun drinking thousands of liters of beer, as the huge trucks with many empty beer kegs surrounding them can attest to. We had to wait in line for a little bit, as they had reached capacity, but a friend got in early and brought beer to us waiting on the other side of the waist-high fence. I don’t know what I had, but it was one of the tastiest beers I’ve ever had… it was sweet! A sweet beer! Imagine that…

It was my only one though, as it was $12 for the half liter I was enjoying, and the food was really expensive as well. I was content to sip from my mug and soak up the atmosphere of cute Japanese girls wearing tight German Oktoberfest clothing walking around along with other crazy crowd paraphernalia like goofy hats, face paint and huge German flags. I was tempted to keep the cup, as you had to pay a deposit on it, but it was really big and I have enough cups at home; some people in our group took some home.

After we all went to a nearby china town; a huge tourist draw as the place itself is massive as well. Lots of it was expensive of course, but we still found a really nice restaurant that had reasonable prices. Ah Chinese food is so good… I miss living in China, with my roommate Chris making fun out of me for playing video games in my underwear all day again and other shenanigans. Ah how things change, I had a PS2 then and now I have a PS3 ^_^ haha. Same underwear. (is he joking?)

After a great night out, we all went our separate ways and I checked into a cheap hotel in a shady area, but it was all-good. For the last day of my trip, Monday, I went to Odaiba; the Tokyo Bay Area. I guess I had been here before for the anime fair with Neal and John as Tokyo Big Site was here, but now I was seeing a different area, and wouldn’t you know it, there happened to be something very special in the air. 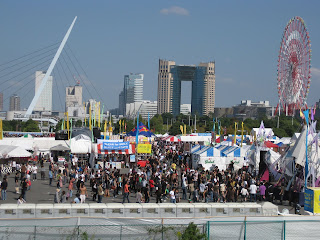 shaking, the heart was beating fast, the sweat glistened off my head under the hot summer sun in Tokyo bay; there 100 meters away was the largest techno party I’ve ever seen. The place might look empty, but trying walking around outside; the sidewalk was choked with people waiting in line to get in.

I’ve heard rumors of this event before coming, but didn’t do any research during my travel-burn-out session. Either way there were wall-to-wall cute girls as I came out of the train station geared out in techno clothing, listening to some intense tunes, and we weren’t even in the concert grounds. The line to get in was huge, and (unfortunately?) I was on a ticking clock…

While my longing eyes and happy ears paid attention to the huge concert, I got myself to quickly check out the tourist attractions I was there for originally. Here you could see the rainbow bridge, a miniature statue of liberty, amazing architecture and other cool stuff again; there was even a model doing a photo shoot down by the water, but I’ve seen more attractive girls, namely my date later with Shiho.

This is when I start to wonder where to draw the line between my public and private life; this was my first date in over a year and a gentlemen doesn’t kiss and tell, even if it’s been years since I’ve done even that. So you’ll get the bare bones knowing we had an amazing evening of eating sushi, playing video games at an arcade, and talking over coffee. I ended up speaking Japanese for almost 4 hours with my limited ability, so I was really tired after, but happy with my accomplishment.

And now here I am, back at work. It was 15 degrees in my house last night as I finished up that last blog with numb fingers. I’m going to try and use my bike today to get kerosene so I can at least heat my house a bit and now I’m caught up and dipping back into my studies. I’m grounded this weekend with work on Saturday, so no new crazy travel plans for a while; I really need to figure out what I’m going to do for my Christmas break…

"Time is not a line, but a series of new points." -Taisen Deshimaru

Good to hear you aren't slowing down none in the old Japan Mr. Salaryman. Shame to hear about the TGS sucking and all...though E3 definitely did have its ups and downs so I guess that can be expected. Hope things keep looking up, ttyl.
Chris