Either you’re feeling it or you’re not.

Another week gone by, a couple things happened I guess. Because the dollar has fallen back home and the Yen is rather strong, I figured it was a good time to try and send money back. Over 2 hours and 5 locations later, I still didn’t get any sent and it was a horribly painful experience, one I’m not going to relive. I’m now signing up for some service that I pay to send money for me; should be ok.

On the note of money, if I were to go home this Christmas, it will put me back at least 1.5k for the flight alone (I guess over 2k now if you convert it, sure has changed alot), 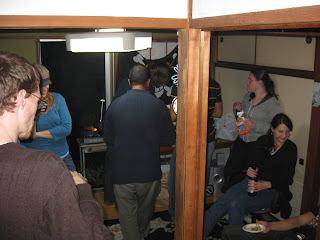 and that’s the cheapest option I found so far; a 3 week trip. I don’t know if I can or should take that much time off. Tough decisions eh, it might make a lot more sense to visit home during an ‘off’ season. I should have looked into this stuff sooner; too bad I’ve been crazy busy traveling and burning out. (pictured: people! in my house! ...whoa!)

Well as for Japan, on Friday I had a BBQ! Our ‘block’ of teachers congregated at my house for shenanigans of drinking, drama, and dining. I found a whole frozen chicken at the foreign store for $6 (cheaper than a meal at a restaurant!) and roasted it up for everyone. It went really well and I even cooked gravy for the first time. I think I threw in too much flour and water though, as the taste was a bit thin; I guess I stressed quantity over quality as it has been so long since my tongue last fused with the harmony of brown love… oh wait, in Vietnam Neal and I got mashed potatoes and gravy at KFC a number of times, so I guess it hasn’t been that long.

I also cooked up a potato dish, and Neal brought a lot of Brazilian sausage, Ike (a new JET) made onion rings, and various people brought chips, snacks, refreshments and other stuff. We played a little bit of video games, but my spacious house was feeling the strain of so many people so it was short lived. Atleast I got to play a lot of music I liked, even if some people commented on how they felt like they were in a spaceship. Good times.

We slept in a bit Saturday and cleaned up the house. A rather successful gathering if I must say. That night in Shiojiri, they were hosting one of Japan’s largest Halloween parties and most people had to get there to volunteer. I showed up an hour before it wound down so I didn’t get to see too much; a pity really. It seemed neat for what I did see though, they closed down a street and had booths sent up all over the place. Lots of kids were walking around in cute Halloween outfits too, something really refreshing to see in Japan. 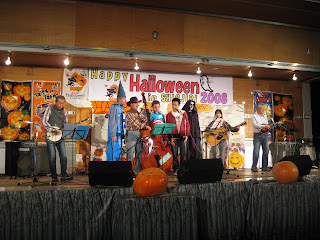 that night. The music was a bit too relaxed at times, and a lot of it wasn’t bad at all. I just wasn’t feeling it though. The place was packed with other JETs, but I could only put names to a handful of them. That was another interesting experience mingling with all these new people, bringing back reminders from when I first came here.

Heh I’m deleting so much of this post just because it isn’t interesting; to me right now anyways. Besides, you don’t want to hear about me judging people anyways. A number of times I just kinda wanted to go home and back to my books; all week was filled with “…OH!” moments and they came one after another, and the feeling is indescribable. A telephone is no long “denwa” as I forced myself to memorize a long time ago, but is now what its Kanji means: “electric conversation”. Maybe I’ve learned to be more focus and not so distracted lately, so when I get forcefully pulled from one world to another I am briefly disorientated for a while; like from my book into a conversation or from writing this blog to having to run to class because the bell rang.

It could be part of this weird feeling I’ve had of late. Sometimes I can’t tell when I’m dreaming, if what’s happening around me is real; leading to odd temptations to do stupid things to test the fabric of this plane’s reality in which my earthly vessel resides and is limited to its current 4 known dimensions. Luckily I’m a goof so if I do something dumb it can easily be laughed off, it’s mostly dumb questions anyways to see if the student understands what I’m saying; like “can you walk to Canada?” I guess I need to spend more time outside of my textbook and with real people; I’m catching myself more and more thinking in Japanese like this morning when I was looking for my shoes: 私の靴はどこですね〜

Sunday was spent trying to fend off a slough of emails from cute girls. In Okinawa I’ve been invited onto a Japanese social site by a friend I made there, and I’ve been getting emails from people ever since, and it kinda exploded yesterday probably because I was at home and able to answer faster; I didn’t even have time to open my books actually with all the Japanese deciphering I was doing.

Now let me explain the deciphering; these girls were speaking (real?) Japanese and not textbook stuff. And they were using all kinds of emoticons, slang and expressions, which screwed with my translator. So I spent a lot of time looking at what they wrote, and tweaking it here and there so it could become legible. Is this how they must feel about our garbage like myspace? Or worse yet, comments on youtube? Where we have idiots posting stuff that can hardly be called English… ah sweet irony, I was really struggling but it’s interesting I can look at their sentences and their structures and tweak it appropriately. Later when Dougal came online and I chatted with him, it was a great relief to put my ideas into English words again and pull me out from the deep end of the pool.

The one girl was a 20 year old house wife, and near the end of the night apparently I wasn’t sending 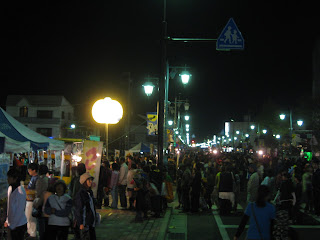 emails back fast enough, and I had 3 in a row from her sitting in my inbox, with the last one roughly translated “little sexy picture of me”. I still hardly know her. Keep an eye on your young, bored, cute housewives fellas!

Ah good thing I’m at work and have no Internet… I’m dreading that inbox a bit when I get home tonight. (update: over 20 messages… time to break some hearts I guess, I don’t have time for this headache) I’m doing a movie night with my friend Osamu, so that’ll be a good respite. We’ve met up a couple times now, I wonder if I should try to add a bit more language exchange to our meetings, something that was offered from another cutie last night. Oh and one girl while she didn’t really know English at all, knew Canadians like to say “ay” a lot. Don’t worry, I corrected her to say “eh” ^_^

Perhaps I learnt a lot through that experience with the language, but it’s hard to tell progress anymore. Is this what it feels like studying for your masters? Constant big discoveries, but no real end in site due to the sheer volume of the task you’re attempting. You keep walking down the road thinking you’ll reach the end eventually, but all you see are bigger and nicer houses, and more roads and avenues you can branch off to. Perhaps this is a metaphor on life as well? You can give up or be lazy or settle at anytime, but the further you go, the more you learn and the more you experience the better your rewards?

Perhaps that’s why nothing seems real lately. Too much time in my books having imaginary conversations in a foreign language with imaginary people, then later feeling haunted when foreign thoughts cross my mind, making me wonder if they were my thoughts in the first place. Is our ability to think limited by language and our understanding of said language? Is that way Einstein and them always stressed imagination, as perhaps that is the only method we can think outside the constructs of rules and limitations we set up for ourselves so we can understand each other? Even the Kanji for “teach” has the symbol “to hit” inside it; do we close our minds to new ideas through learning?

"It is not what we get. But who we become, what we contribute ... that gives meaning to our lives." -Anthony Robbins