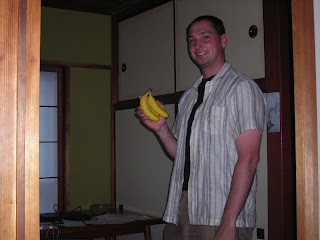 nothing wrong with a slow week; this will be one of the easiest write-ups yet. I worked Monday to Saturday then had a super lazy Sunday. When I say lazy, all I really did was do some laundry, got some groceries, did some cleaning, fixed a paper window or two and failed at studying. A really lazy day for me; amazing the things you’ll think of doing when you’re avoiding studying. It was a nice, hot day, maybe one of the last ones before the snow as I usually turn on my kerosene heater at night as of late. I even had two naps during the day, one on my couch and one later on my bed with the window open. (Pictured: then)

I tried studying, but it just wasn’t happening; it almost feels like I’m trying to dig myself out of deep mud when I look at my piles of flashcards that I had mastered a couple weeks ago and haven’t kept on top of. I have strategies to get around this stump, I’m putting them to use today. But since I was still lazy yesterday, I opted to put on some Japanese listening tapes so at least I was learning passively while I laid on my couch looking at the ceiling, wondering what all that turkey and gravy must have tasted like back home and other brain processing cycles. This was my first “day off” at home in months.

I guess a couple things happened last week of mention; like some girl students staring at me with wide eyes while they came in close to talk. I said “nice weather” and they gasped “nice body?!?!?” I wonder what’s on their minds? I gave a different girl student a compliment on her cute red sweater another day, and she said “cute and sexy girl” back to me. The teacher beside me started laughing heavily, although I’ve heard this line a couple times already; the cuteness doesn’t get old though.

Another JET was telling stories about the girls at her high school, grabbing each other’s breasts and banging and moving them around together like they’re… something you bang around together; cymbals she compared it to. Then later how some boy students snuck behind a group of girls and gave a big slap on the boobs from behind, the other girls laughed at the victim, sympathizing in her misfortune while she weakly cried “itai” (ouch). My students aren’t this bad, but I do see bold groping from time to time, and I call them ‘sukebe-chan’ (little pervert; ‘chan’ makes it cute). They’re more shocked at me saying that then the sexual harassment going on, and most times it incites them to be dirtier, like one chasing the other and flipping her skirt, so I don’t say it much anymore.

Maybe the best story was a mob of girls coming to mug me for candies I didn’t give out yet in class after the bell rang, yelling “Choko! (chocolate) Choko! Give… me!” I don’t give this stuff out for free otherwise I’d be broke, so of course I got them to dance for it first. The one did an easy jig with her fists in the air and a little hip action side to side. I congratulated her on her super cool dance, and she later bragged to the teacher about it. Apparently what she did was a very popular diet dance in Japan. (girls here are obsessed with dieting, even if they’re all bones) So what better way to reward her diet? With a chocolate treat of course. Ah well, I still think it was cute.

Oh, and for the first time in 7 years I weigh less than 200 pounds; I’ve lost 20 kg since coming to Japan last year. 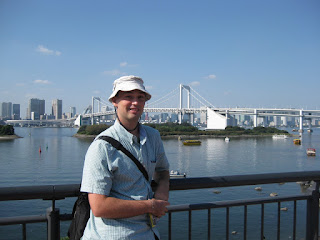 My belt now needs another 2 holes cut into it and most of my pants I can take off without undoing; I’m going to need to do some shopping I guess (please don’t send me more clothes mom, I have too many in my small closet and need to throw some out, thanks though!) I have a new friend or two in Tokyo now that can maybe help me pick some Japan-appropriate fashion. Oh and I spent a lot of the week tucking in my chin and feeling my throat, marveling in how I can hardly feel my second chin anymore; another 5-10 kg and my abs will be back. (Pictured: now)

I’m just reaching for stories now… a new JET, Richard, paid me a visit Saturday night where we had ramen and watched a movie at my place, and Saturday after school I played Badminton; we lost a lot because I suck but it was fun.

I think it was Wednesday, I don’t remember, I made 2 pizzas and baked them in my oven. It was so tasty I ended up eating both and had some cold beers on the side. It was really nice, and in the morning I still weighed 90kg. Good times.

"If the whole world followed you, would you be pleased with where you took it?" -Neale Donald Walsch