Well, a 2-month break from the blog is probably long enough; my sister Patty was asking when I was going to update it next because she doesn’t know what I’m up to otherwise. I kept my head down and worked my butt off at my new job, and then at my first performance review I did very well in all categories, as was my goal. Basically the only feedback I could get was “don’t change.” But anyways I’m sure you’re interested to hear about Thailand, especially if you know already what happened there. 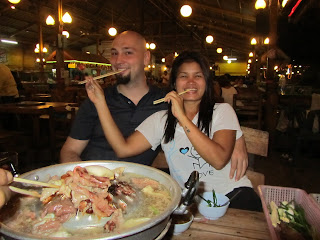 To sum up the trip, it was busy but not extravagant like past excursions; most of my pictures are at restaurants eating awesome food. We went to all kinds of places and partook in a few too many Asian buffets. Because my mom mentioned duck a lot when we were in China Town in Japan, I ordered it for many meals; one small mom & pop restaurant was so delicious and cheap that I somehow put away 3 different meals in one sitting. Duck definitely has grown on me and I enjoyed it tremendously. 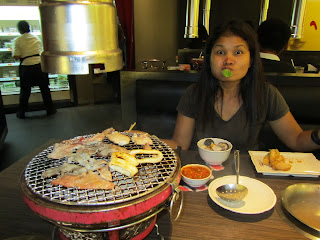 We spent the first couple nights renting one of Peter’s condos. (One of the travel agents I befriended years back). This is where Ann’s friends stay for cheap when they come to Thailand for a month every year when their restaurant in Switzerland gets snowed in.

It was there a couple mornings later when I walked up behind her while she was making coffee, and gently tried to reach for her hand from behind. Because she was a bit busy, I ended up making her knock some stuff over.

“What are you doing?” She asked me with a bit of frustration.

“Give me your hand.” Was my answer. When I had it, I gently slipped on my mother’s old engagement ring onto her finger. We didn’t say much, we didn’t have to; we just held each other tight. (Ann doesn’t like me to see her cry). 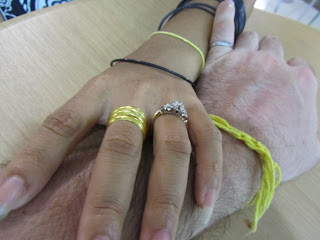 Later in the day we went to a jewelry shop where we had the ring re-sized. These first couple days were busy as I tried teaching her how to use her new computer and installed tons of updates. She went to English class the one day while I perused the nearby book store; buying her various comics from Anime cartoons that I love like One Piece, and a book I read years ago: Eragon. Once her class was over we were free for the weekend to visit her hometown of Surin. 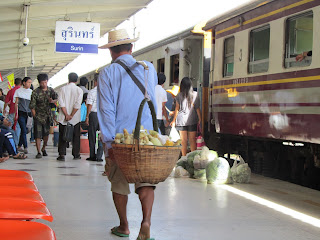 It was almost a whole day trip. Saying her hometown is Surin is something of a misnomer as well; it’s the nearest big city where you can rent a hotel room or buy groceries from a supermarket. We stopped by there so we could get gifts for her family.

I was fully thinking gifts like chocolates and cookies, but right away I felt a bit foolish; Ann was picking up items like instant milk mix so her mom could get calcium, laundry detergent and a Styrofoam icebox to keep some fish we bought cold for them as they didn’t have a fridge. I had a hard time thinking of a sentence to explain how I felt then, but I guess you could say, “humbled.”

We woke up in the morning by something of a rude call from Ann’s mom. Apparently she wakes up at 4 in the morning every day and expects everyone else to do the same, so she called us at 7 in the morning asking why we were 3 hours late. Not the best first impression on the new in-laws, but I can roll with the punches.

We took the train to her ‘real’ hometown of Samrong Thap. From the train station we hired motorcycle taxis, as I don’t think they had taxi cars. We pulled up to her family’s house and I was able to meet everyone for the first time. The house was a bit of a shanty; the first floor didn’t have walls, it was more pillars supporting the second floor where they slept, and in the middle was a small cattle pen holding 2 cows. I assume this is to help prevent thefts, as if you lose your livestock it’s a very serious hit to your livelihood. Like how I felt in the Dominican Republic, I held back from taking too many pictures of poverty, as I don’t like the impression that makes; these are people, not a side show for photos. A bunch of neighborhood kids had gathered to watch cartoons on the neighborhood 8” tv suspended from the ceiling, strung up to wires in a hazardous-looking self-repair effort.

Ann was the only translator for the entire group, so I didn’t have much to do but sit there and try not to gawk at things like chickens and their babies running free range in the dirt house. I heard the word “King Kong” once when they were talking about me; I had to duck to not hit my head on the 2nd floor support pieces. Ann’s mother swept dirt off the dirt floor so she could roll out some bamboo mats, as what’s used in formal occasions. We had come to announce our intention to marry, but it seems like they believed we had come there to marry instead. 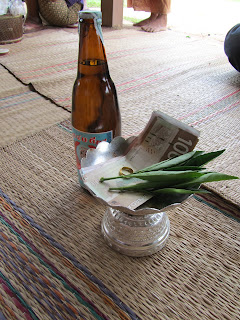 Ann tried to explain how we wanted to get married next year, but she kept saying to me how they didn’t understand her. There may have been a language barrier for her too, as she was only able to come home once or twice a year in the past because her former jobs kept her too busy and/or too poor to visit more. They were also stuck in an old mindset so maybe they didn’t “understand” with quotation marks; like how some people believe how you can’t “live in sin.” They were disappointed my family didn’t come along with me to visit them too, and they were disappointed I didn’t have a ring there (it was still in the shop being resized).

Before long Ann’s cousin was instigating how much of a dowry I would pay. Again they didn’t “understand” we weren’t getting married yet. Although I don’t know Thai I could feel the stress through proxy with Ann and before I knew it we were on a motorcycle driving very slowly back to town so Ann could clean out her bank account for the dowry because I didn’t have much money on me at the time because I didn’t think I’d have to pay the dowry right away. It came down to: “You can pay a little now and more later, or just pay 20,000 baht (around $600) and be done with it.”

We chose just to be done with it. 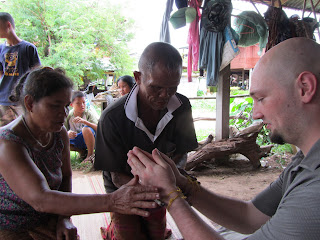 So there we were, in this little town of Samrong Thrap, taking our sweet time to make our way back to the gauntlet that waited. I found it ironic in a way how I finally got to meet her family and now after an hour or so we were avoiding them. After Ann collected herself, we made our way back to our surprise Buddhist wedding.

The money was placed on a ceremonial dish along with a gold ring Ann bought with some birthday money I sent her. Everyone then took turns tying golden strings around our wrists while giving us their individual blessings. Her parents went last. After this the wedding was done. We took some photos, and interest in me was finally starting to drop a bit; now the men of the neighborhood were gathered around that same TV now showing Thai fighting. 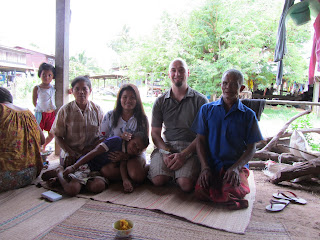 I had the chance to meet Ann’s son, Pon. He is a very quiet and shy boy, but knowing how he likes video games I gave him my old Nintendo DS as a gift as I hardly play it anymore. What wasn’t worth much to me, you could tell was worth the world to him, so I’m glad I could make some impression. After about an hour, Ann and I left back to our hotel in Surin, as she wanted to leave “before everyone got drunk” in celebration.

That night we both read our books a little while before going to sleep early as we tried to recover from the crazy day we just had. I joked with her about how we became an old married couple on our first day of marriage. I asked Ann if she wanted to see her family again tomorrow and she said “No.” I guess things were even harder on her this time than normal, as having me around made neighborhood people she hadn’t spoken to in over 10 years come up to her and either ask for money, or try to sell her something stupid at a ridiculous price. When she visits her family she just wants to relax. 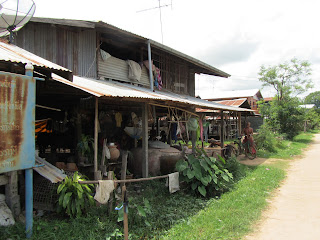 We made our way back to Bangkok where we spent an entire week trying to get papers ready for the wedding. The Canadian embassy has more security than staff working there during the 3 hours a day they’re open from Mon-Thurs so that was a problem. It was “go here, get this, go there, get translated…” etc for a week. In the midst of this, one of those steps made our wedding official, so as of July 28, 2011, Ann became Punyaporn Schoenroth. 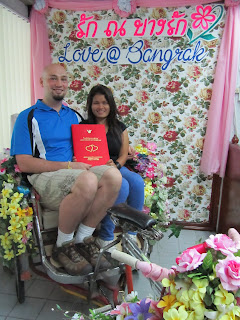 That night over supper it just kinda came out: “So you’re my wife now?” I asked her, it was such a whirlwind. We still had a couple days of paper work and when it was finished as far as we could take it and I only had a couple days left of my holiday, so we had a brief honeymoon of sorts back at that beautiful hotel we stayed at years prior right on the beach of Pattaya.


Before I left Thailand, Ann wanted to make a special stop with me. While I was gone she went to various temples and shrines all around Thailand, praying for my safe return; the past year wasn’t just hell on me after all. After praying at one shrine in particular, as recommended by her friend, I gave her the news a couple days later of how I found a job and I was finally coming to visit her after more than a year; our prayers were finally answered. 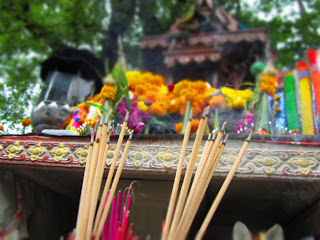 Together we visited this small shrine on the side of the road, where we both gave thanks and made well wishes for our long and happy life together.

"When you realize how perfect everything is, you will tilt your head back and laugh at the sky." -Buddha