Around the World in 27 Hours

If you weren’t convinced not to fly United after my last entry, the next day’s plane was delayed 4 hours, long enough to miss any transportation out of Tokyo for the day. Now it was the long weekend, and to my surprise, all bus tickets everywhere were sold out until 9 that night. My only option was to stand on a train for 3 hours, packed like a sardine with all of my luggage. Instead of getting to Matsumoto Thursday night, I arrived there Saturday afternoon. The trip got good after that though; I surprised Neal by dropping in at his place, fresh out of the shower. 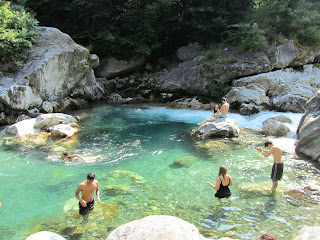 It was really strange being back in Japan. I had said my goodbyes and found the closure I needed, so being back initially felt unnecessary. Despite efforts and many conversations with myself, I had forgotten so much of my Japanese. Not only that, but it was too damn Hot! A hidden truth at the time, I was afraid to see Ann again after so long and suffering such hardships. I thought a year is a long time, and people change a lot in that time. I didn’t know what to expect, and Japan would be a good diversion along the way to see my friends off before they scatter around the planet again.

I’d say the majority of people I caught up with had something new entering their lives much like myself, but everyone was affected, mostly in subtle ways, to the devastation of the March earthquakes. What really stuck out to me was when Brian mentioned how he never eats at home anymore. “Life is too short: for the time you spend shopping, cooking, eating and cleaning, you could be out meeting people.” Profound and frightening, I recall it often. 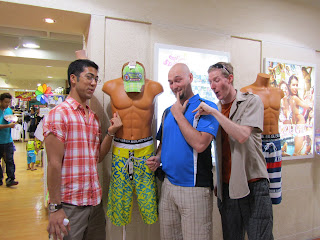 In the end though, I was fairly happy to go back to my old stomping grounds. I had a checklist of all the foods I would savor again and very little else on the “to do” list. Luckily I have good friends to make suggestions: the first one being Richard’s: let’s visit the Komagane water hole. I had been there 2 times before: for my welcome and farewell parties respectively, but it was still enjoyable to escape the muggy hot air.

It was the plan that I would join in my old Oral Communication class, the best class I’d been able to teach, and I even bought presents for everyone. Alas, since my airline turned my 4-day trip into a 2-day trip, I could only stop by after hours. I was lucky to see one of my old teachers and leave a small gift for the other teachers through him. 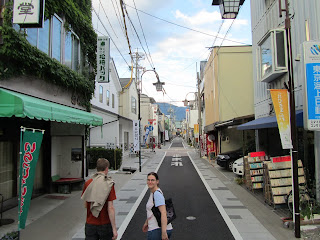 One thing that shouldn’t have surprised me but did was just how beautiful and perfect everything in Japan seemed to be. The grass couldn’t be greener, the air couldn’t be cleaner, and the streets and roads couldn’t be more pristine.

That Saturday night was Dougal’s farewell party and a good chance to see many people off myself. I was able to meet his Thai fiancé and hear about their immigration woes as well. She was lucky though, and later was able to visit Canada.

I was fortunate Neal gave me my own room, as it was so hot I slept with nothing on but underwear while the fan kept me from cooking. He even cooked a delicious breakfast for me both mornings.

Sunday was more a day of ‘shopping’ for stuff, though not much was bought. We mostly hung out and visited in the air-conditioned malls. In this time I was able to meet up with more friends, and we all went for sushi that night. Our group was so large that we sat at four different tables, where we all visited for hours while gorging on the treats. 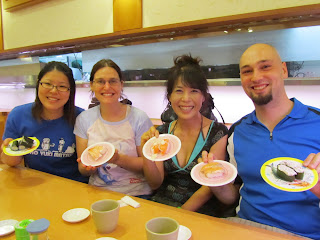 That night I was exhausted and wanted nothing more than to sleep, but it was my ‘last night.’ Fighting fatigue, we played “The Game of Things” that I had been ranting and raving about the last 2 days. It was still entertaining, but I had a headache from being overtired so it didn’t get crazy or anything. That said, it wasn’t a very late night, but a nice small hang out before my farewell.

Just like almost exactly a year prior (I was still on their records), a taxi picked my up from Neal’s house to take me to the airport. It was a good trip, but one I doubt I’ll repeat. Maybe I’ve become better at understanding how fleeting everything is and not to get too attached to any one thing; the food tasted exactly as I remembered it, my friends are all going their separate ways, and life is fragile. In an instant not only was a nation devastated, but also everyone in the country was subtly impacted.

I tried pushing these troubling thoughts out of my head during the next 12 hours or so to Thailand. Alas here is the moment I was waiting for, for over one long, arduous year. Why was I so nervous?

I got through customs into the meeting area and looked around for her. She was hopping up and down behind a group of taller people crowding the gate, and we both started walking to the opening where we could meet, faster and faster. Finally, there she was, held tightly in my arms again. I held her, she held me, and all the pain and frustration, and all the tears and devastation from the last year... just seemed to wash away.

I enjoyed that euphoria for days, medicine for my soul; every time I held Ann.

"Faith is taking the first step even when you don't see the whole staircase." -Martin Luther King, Jr. 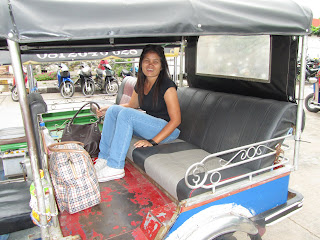